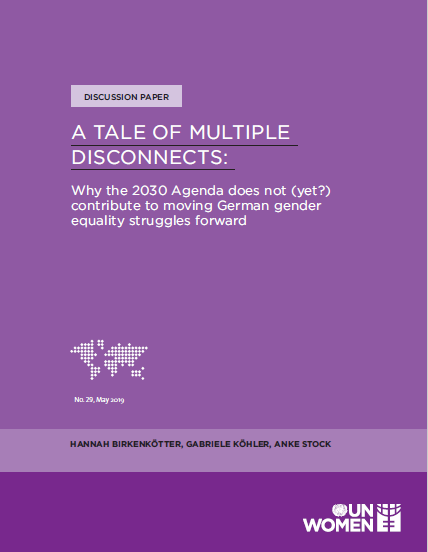 A tale of multiple disconnects: Why the 2030 Agenda does not (yet?) contribute to moving German gender equality struggles forward

This study addresses the percolation and domestication of the United Nations’ “2030 Agenda for Sustainable Development – Transforming our World” in Germany with a view to understanding its impact on domestic gender equality policies. Concentrating on federal-level policymaking, the main finding of the study is that the 2030 Agenda and SDG 5 have, as of yet, not had a discernible impact on domestic gender equality struggles. This is surprising, since the 2030 Agenda offers a holistic conception of sustainability, and thus has the “value added” advantage of merging and transcending the rather disjointed gender, social justice, and ecological sustainability policy strands.

Based on 28 interviews with government officials, CSO representatives, and researchers, the study observes multiple disconnects. There is a lack of cohesion and consistency across ministries and civil society actors, resulting in a horizontal disconnect. There is a vertical disconnect between the 2030 Agenda as a multilateral agreement and its domestication. Perhaps because the 2030 Agenda is a soft-law tool, it has limited clout for transformative change; it is moreover seen to be weaker on gender equality commitments than other pertinent international agreements.

An obvious conclusion of the study is to strengthen institutional linkages. The vision of gender equality needs to resonate with all actors supporting sustainable development. This could support women’s struggles in addressing Germany’s structural gender disadvantages.

This paper was produced for UN Women’s flagship report, “Turning promises into action: Gender Equality in the 2030 Agenda for Sustainable Development”, to be released as part of the UN Women discussion paper series.

Making women and girls visible: Gender data gaps and why they matter

18 December 2018
Making women and girls visible: Gender data gaps and why they matter