The goal of the meeting was to provide information and clarity on the processes of the Post-2015 Development Agenda and various developments and related activities, also to discuss how UN Women and Civil Society Organizations (CSOs) can work together to ensure that gender remains central in the Post- 2015 Development Agenda. 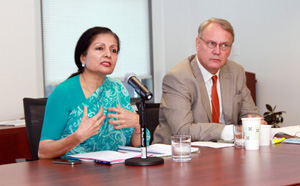 The meeting was opened by Lakshmi Puri, UN Women's Deputy Executive Director, Intergovernmental Support and Strategic Partnerships. Ms. Puri focused on collaboration and engagement between UN Women and CSOs on the Post 2015 Development Agenda and the Sustainable Development Goal (SDGs) process as well as the Rio+20 outcome and its implications for the post-2015 development framework. She highlighted the need to develop a transformational agenda which underscored gender equality and women's empowerment as defining principles.

This was followed by a presentation by John Hendra, UN Women's Deputy Executive Director, Policy and Programme. 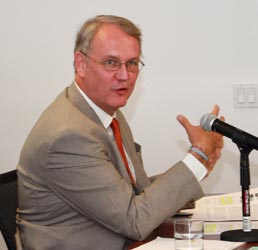 Mr Hendra provided an overview of the post 2015 development agenda at the United Nations, outlining three processes that are currently underway, namely: the work of the post-2015 UN Task Team, comprising sixty UN organizations and the Bretton Woods Institutions, which delivered its report on “Realizing the Future We Want for All to the Secretary-General in June 2012 and in which UN women contributed substantively; the High-Level Panel of Eminent Persons on the Post-2015 Development Agenda, which was appointed by the Secretary General in July, 2012; and the UN Development Group-developed framework for country consultations and in which UN Women country offices will participate.

Mr Hendra emphasized that UN Women's role in the UN processes is to ensure the pre-eminence of gender equality and women's empowerment in the future development frameworks. He also stressed the need to engage with UN Women country offices strongly and substantively in order to influence discussions at the country level. 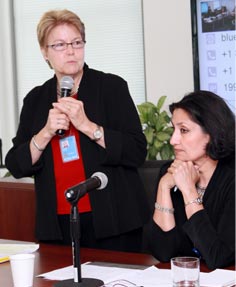 Charlotte Bunch, representing the GEAR Campaign moderated a discussion on good practices on various alliance-building and advocacy strategies, pointing to the need for successful CSO engagement with Member States and the United Nations. Ms. Bunch spoke of the UN's convening role and how necessary it is for UN Women to use its access to governments and other UN entities, to create the necessary space for civil society's voice to be heard, emphasizing that this needs to be done in a consistent and systematic manner.

The next presentation, by Eleanor Blomstrom of Women's Environment and Development Organization (WEDO), outlined how civil society participation was structured during the Rio+ 20 Conference process with particular attention to UN Women's successful and effective partnership with the Women's Major Group. Ms Blomstrom shared some insights and experiences as well as lessons learned that could benefit civil society and UN Women collaboration going forward in the post- 2015 process. 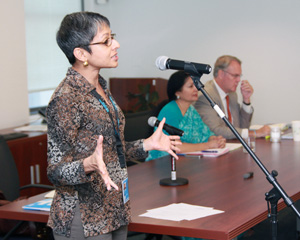 The final discussion of the meeting, moderated by Lopa Banerjee, Chief of UN Women's Civil Society Section focused on the potential opportunities for CSO engagement and the strategic entry points for women's organizations. The meeting concluded with the recognition that strategic partnerships and alliances with Member States and key bodies such as the European Union and other UN partners is of utmost importance in influencing the normative framework of the post- 2015 agenda and other development processes.

Moving forward, civil society organizations expressed the need to “open up the conversation with governments and looked to UN Women to help with these efforts, in order to galvanize civil society's own constituencies at the national level. 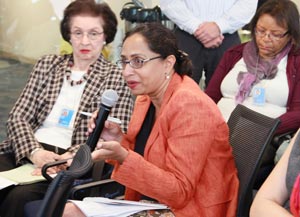 Representatives of Civil Society at the consultation with Civil Society Organizations on the Post 2015 Development Agenda. Photo credit: UN Women

There was a call, by GEAR, to ensure that there exists a cross conversation between the various events and anniversaries of intergovernmental mechanisms such as United Nations Resolution 1325 and ICPD +20 so that these processes are aligned.

UN Women stressed its commitment to continue to work strategically with member states and other parts of the UN System and civil society to make the case for gender equality and women's empowerment in all future development frameworks.

An extranet platform is being set up to facilitate on-line engagement within and among the civil society advisory groups that are being set up at the global, regional and country level, and other members of civil society who may be invited to participate in online discussions.

Related News
27/09/2018
Speech: Empowering women through the sustainable management of natural resources
28/08/2018
“We must leverage women's voice and influence in water governance”— Åsa Regnér
18/07/2018
Speech: “We need to strengthen accountability for gender equality commitments at all levels”—Åsa Regnér
27/04/2017
Innovation with purpose to spur gender equality and sustainable development
10/12/2016
UN Women Statement on behalf of the Global Migration Group at the Ninth GFMD Summit
END_OF_DOCUMENT_TOKEN_TO_BE_REPLACED