(New York, 12 October)—In an unprecedented move, the United Nations Security Council will tomorrow conduct an all-day Open Debate in commemoration of resolution 1325 on women, peace and security presided by a Head of Government or State, with Spain’s Prime Minister Mariano Rajoy chairing the 13 October proceedings. The historic review is timely, coming at a moment when the world is grappling with rising violent extremism that places the subordination of women at the centre of the ideology and war tactics, and violence and conflict are costing the planet over USD 14 trillion [1]. In direct contrast, striking new research shows that peace endures when women can participate meaningfully in peace talks, and States are more resilient in the face of conflict and extremism when gender equality is prioritized. 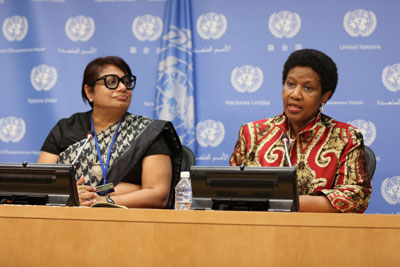 The UN Security Council’s High-level Review on the women, peace and security agenda will commemorate the 15th anniversary of UN Security Council resolution 1325 which recognized for the first time in 2000, the role of gender equality and women’s leadership in international peace and security. This is the third major review conducted by the United Nations this year on international peace and security, complementing the reviews of peace operations and the peacebuilding architecture, and comes only weeks after an unprecedented gathering of world leaders at the 70th session of the UN General Assembly committed to gender equality as central to the new global development roadmap.

In 2014, 88 per cent of all peace processes with UN engagement included regular consultations with women, a significant rise from 50 per cent in 2011. Prior to the adoption of Security Council resolution 1325, 11 per cent of peace agreements made a reference to women or gender. Since then, this percentage has increased to 27 per cent. Yet, this shows that almost three-quarters of peace agreements over the last 15 years made no mention of women.

“The evidence shows us unequivocally that women need to be full participants at the peace tables, as negotiators and decision-makers in a much more inclusive process. Women have to be able to control where resources are needed, for example to overcome trauma and the scars of war, or directing practical recovery matters like restitution of property and fields,” said Phumzile Mlambo-Ngcuka, UN Under-Secretary-General and Executive Director of UN Women. “UN Women is calling for accelerated action to achieve women’s leadership in peace and security with stronger political direction, greatly enhanced financial support and well-targeted spending. This anniversary must mark that threshold moment where words become action.”

She stressed: “We must not miss the chance to achieve radical change – moving from treating women’s issues as side issues or peripheral to the business of the UN, to making women and girls the missing answer to creating a peaceful and just world. Every day that women are excluded is a day longer to wait for peace. ”

At the launch of the Global Study on Security Council resoultion 1325 in New York on 14 October 2015.

Coinciding with the review is the launch of Preventing Conflict, Transforming Justice, Securing the Peace: A Global Study on the Implementation of Security Council resolution 1325, a major new report commissioned by the UN Secretary-General in preparation for the 15th anniversary review. The report brings together research which unquestionably demonstrates that women’s empowerment and gender equality contribute to the conclusion of peace talks and sustainable peace, accelerating economic recovery, strengthening protection efforts of peace operations and humanitarian assistance, and countering violent extremism.

Yet under-investment in gender equality continues, with only 2 per cent of aid to peace and security in fragile States in 2012-2013 targeting gender equality as a principal objective, and only 3 per cent of the military personnel in UN missions being women. The target adopted by the UN Secretary-General five years ago to earmark 15 per cent of all peacebuilding funds to advancing gender equality and the empowerment of women remains unmet by UN entities. This year, the Secretary-General extended this target to emerging areas of peace and security threats, including countering violent extremism.

The new Global study was led by independent lead author Radhika Coomaraswamy, former Special Representative of the Secretary-General on Children and Armed Conflict and Special Rapporteur on Violence against Women, supported by a high-level advisory group of eminent experts, and managed by a Secretariat hosted by UN Women.

Over the last 15 years since resolution 1325 was adopted, the percentage of women in peace talks has stagnated in single digits, with national dialogues and decisions in conflict-affected countries routinely dominated by a small group of male leaders. Direct consequences are felt on women’s lives: over half of the world’s maternal deaths occur in conflict-affected and fragile States; approximately half of out-of-school children of primary school age live in conflict-affected areas; and girls’ net enrolment rate in primary education is 17 points below the global rate. In conflict-affected settings, the risk of sexual violence, child marriage and HIV infection all increase. In contrast, findings in the Global Study highlight that when women are at the peace tables, their participation increases the probability of a peace agreement lasting at least two years by 20 per cent, and 35 per cent over 15 years. Furthermore, evidence reflected in the study also shows that States that have higher levels of gender equality are less likely to resort to the use of force in relation to engagement with other States – making gender equality a powerful tool of conflict prevention.

During the Security Council review, UN Women’s Executive Director will also present the main findings of the Secretary-General’s report on women, peace and security. Congolese activist Julienne Lusenge and Iraqi activist Yanar Mohammad, both leaders of prominent women’s organizations in their countries, will give a voice to civil society organizations. UN Member States are expected to bring forth new commitments and actionable plans to accelerate implementation of resolution 1325, ranging from new funding, to legal reforms, investments in women’s leadership as part of post-conflict peacebuilding and recovery, and greater protection of women’s rights in conflict-affected settings. One specific measure that is expected to be announced is the creation of a Global Acceleration Instrument, a special fund that will rapidly disburse financial support to those working on women, peace and security and responding to the sudden onset of armed conflict and humanitarian emergencies. A donor conference is planned for early 2016 to raise resources for this new mechanism.

UN Women is the UN organization dedicated to gender equality and the empowerment of women. It stands behind women’s equal participation in all aspects of life, focusing on five priority areas: increasing women’s leadership and participation; ending violence against women; engaging women in all aspects of peace and security processes; enhancing women’s economic empowerment; and making gender equality central to national development planning and budgeting. Since its creation in 2010, UN Women leads coordination on women, peace and security in the UN. The organization currently supports women’s engagement in peace talks in several countries, from Colombia to South Sudan or Syria, women-led peacebuilding initiatives in Burundi, Guinea, Liberia, or Kyrgyzstan, accountability for gender-based crimes all over the world –including through the deployment of experts in investigation of sexual and gender-based violence in support of UN Commissions of Inquiry, the International Criminal Court, and national war crimes courts, relief for women and girls in humanitarian emergencies, from Nepal to the countries neighbouring the civil wars in Syria, Central African Republic, and South Sudan, training for peacekeepers, and women’s access to justice in Somalia or Central African Republic. UN Women also leads the development of monitoring and accountability frameworks for UN entities and Member States and the adoption and implementation of the Secretary-General’s seven-point action plan on gender-responsive peacebuilding.

For media interviews, information and copies of the report, please contact:

Social media: Join the conversation around the High-level Review on women, peace and security on Twitter using the hashtags #1325at15 via @UN_Women

[1] Institute for Economics and Peace. 2015 Global Peace Index (a composite index comprised of 23 qualitative and quantitative indicators that gauge the level of peace in 162 countries).

Related News
14/05/2013
In the words of Saran Keïta Diakité: Girls receive a visit from a different man every night, a ‘new husband’
11/04/2022
Speech: Women’s involvement is both a right and an opportunity for better outcomes
30/10/2018
Take five: “A successful peace process simply demands the active and meaningful participation of women at all levels”
01/09/2016
Women of Syria, a strong constituency for peace
25/01/2016
Women mediators promote peace in Burundi
END_OF_DOCUMENT_TOKEN_TO_BE_REPLACED