In the words of Saran Keïta Diakité: Girls receive a visit from a different man every night, a ‘new husband’

Saran Keïta Diakité is a lawyer in Mali and President of the Malian branch of the NGO Working Group on Women Peace and Security (Réseau Paix et Sécurité des Femmes de l’Espace CEDEAO). As the Donor Conference on Mali starts in Brussels, in her own words she speaks about the atrocities occurring in her country, which has been plagued by political instability and the proliferation of armed groups that have uprooted more than 415,000 people since a military coup d’état in March 2012. She also talks about the work of her NGO, supported by UN Women, to assist survivors of violence, provide access to justice, and to ensure women have a say in peace negotiations. She was one of four female mediators who took part in peace negotiations from 15-17 April 2012 in Ouagadougou, Burkina Faso. Saran also recently spoke in April 2013 at the UN Security Council’s Open Debate on conflict-related sexual violence in New York. 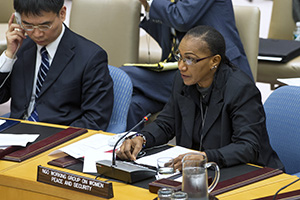 Saran Keïta Diakité (right), speaking on behalf of the Malian branch of the non-governmental Working Group on Women, Peace and Security, addresses the Security Council debate on sexual violence in conflict on 17 April 2013, in New York.
“It is true that there was genocide in Rwanda and there have been cases of rape in Congo, but what happened in Mali is unprecedented.

At the outbreak of the crisis, UN Women commissioned a study in the regions of Gao, Menaka and Ansongo, in April and May 2012 and in September 2012. The outcomes of that study revealed over 100 cases of rape, both individual and gang rape. When these women talk about what happened, it’s appalling. The victims’ ages range from 9 to 70. Imagine the horrors that these survivors have endured.

Throughout the occupied regions, girls are forced into marriage. When an Islamist marries you, you can be sure that, at night, you will be visited by at least four or five people, and that every night, you’ll receive a visit from a different man, a “new husband”. One girl told me: “it was by the smell that I knew that it was a different man coming to me every time. Every time, I was aware of a different smell than the last time.”

The Islamists perform religious marriages in order to escape the clutches of international criminal justice. They carry out a form of “marriage” so that, at night, you can be treated as a sexual slave. During the day, you are there to serve tea to the men and attend to their every need. This is why I always say that what’s happened in Mali is unprecedented.

It’s true to say that rape is being used as a weapon of war.

Imagine, in Gao, armed men bursting in on a family. The husband is there. They seize his wife, rape his wife and his daughter. I warn you, what I’m going to say is hard but they force him to rape his daughter. It’s dreadful. When you do that to a man, it takes away his humanity. Even if he wants to resist, he can’t. It’s to be expected, it’s human.

Anyone who turns a woman’s body into a trophy of war, he’s already won the battle. He doesn’t need any other weapons. He’s already won. 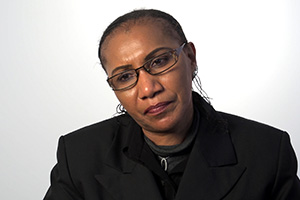 Supported by UN Women, Saran’s network assists survivors of violence.
In response to this crisis, UN Women is working in partnership with the Government[i] and civil society organizations in the regions of Timbuktu, Kidal, Gao, Mopti, Ségou, Koulikoro and Kayes. They are implementing an aid programme for women and girls affected by the conflict, and ensuring women’s participation in the process of consolidating peace. This programme provides a multi-form response, specifically: women’s participation in conflict resolution and the return to peace; access to information and care services to deal with gender-based violence; psychosocial and medical assistance, including consultations and medication costs; as well as economic empowerment of displaced women and girls, and increased representation of women on official post-transition bodies.

UN Women has supported the Association of Malian Women Lawyers (AJM) in implementing a prevention project and care services for women and girls who are victims of the conflict in Mali. Units providing integrated care services have been established in Bamako, Mopti and Kati for communities that have been affected psychologically. The purpose is for women and girls in particular, who are the victims of these atrocities, to be able to go to these care units. Psychologists, lawyers and doctors are also there, available for consultation.

UN Women has helped women to obtain prescriptions, and has guided them towards health centres where they will benefit from the services of the Association of Malian Lawyers, funded by UN Women. This project has made it possible to identify numerous cases of rape, individual and gang rape. A special fund has been established to provide legal services to the victims on a voluntary basis.

Getting compensation for injury suffered is extremely difficult when it is necessary to operate on a case-by-case basis. Dealing with lawyers who are unsympathetic can mean that claiming damages gets compared to a form of prostitution on the part of the person who has been raped, even though it is not prostitution.

When a girl is raped, she is rejected by society. She does not get a husband. And when a husband finds out that his wife has been raped, she is immediately rejected. So, all this means that for a woman who has been raped, if she has to go and make a claim for compensation for hardships caused by rape, the comparison can be made with prostitution: taking money because you’ve been raped. That makes matters even worse.

But, there needs to be collective compensation. By awarding compensation collectively, no one knows who has received what, who has been given what. But the victims of these rapes, they will know what has happened and that will stay between them. In our society, it’s better that way.

When you know how slow and complicated the whole legal process is, both national and international, when the intention is to have all of these cases tried in judicial institutions, there’s a risk that it could take many years. It takes a long time and, meanwhile, the victims are waiting and not receiving compensation. But we can start with transitional justice, summoning those responsible for these crimes so that they can understand what they have done wrong, so that they can apologize and offer compensation immediately, so that people can learn to co-exist again.

It is absolutely essential that we talk about these rape cases. During my recent intervention at the Security Council, I asked for a compensation fund for these rape victims and for that fund to be made available to civil society organizations, and for the women involved to be able to talk about these cases, so that they can receive proper support.

The need to include women in peace negotiations 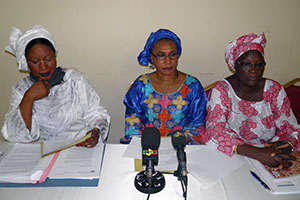 (Left to right) Soyata Maiga, Saran Keïta Diakité, President of women’s peace and security network REPSFECO/Mali, and Diarra Afoussatou Thiero attend a UN Women training session on mediation prior to attending peace negotiations in Ouagadougou in April 2012.
We took part in the Mali crisis negotiations that were held in Ouagadougou, Burkina Faso, in April 2012. Our participation was facilitated very swiftly by UN Women. During that time, I can assure you most sincerely, our voices were clearly heard. All the concerns that we raised were taken into account in the resolution, in the final Ouagadougou Declaration. However, that mediation meeting was the first time for me.

If you want to negotiate, you have to include everyone. You cannot undertake negotiations and leave out over half the population.

Their active involvement is absolutely obligatory, and I mean active. In all the phases of crisis management, women must be involved. A crisis managed without women is going to fail. We have had crises, there have been humiliations. Women were not at the negotiating table. Look what happened as a result.

Perhaps they do not understand their rights. But there are specific rights, rights that are there during periods of conflict, and that are there for these women.”

[i] Ministry for the Family, the Promotion of Women, and Children; Ministry of Defence, the Armed Forces and Security; the ministry responsible for decentralization; Ministry of Justice; and Ministry for Social Development and Humanitarian Action.

Related News
09/01/2013
Helping rape survivors in Mali to speak up
01/12/2015
In the words of Julienne Lusenge: “Women are the first victims of war” in the Democratic Republic of the Congo
07/06/2013
Lakshmi Puri speech on Women Peace and Security
19/03/2013
Malian armed and security forces gear up to better protect women and children in conflict situations
25/01/2013
Malian women make their voices heard: emergency aid, participation in the peace process, and justice for all
END_OF_DOCUMENT_TOKEN_TO_BE_REPLACED