In the words of Julienne Lusenge: “Women are the first victims of war” in the Democratic Republic of the Congo 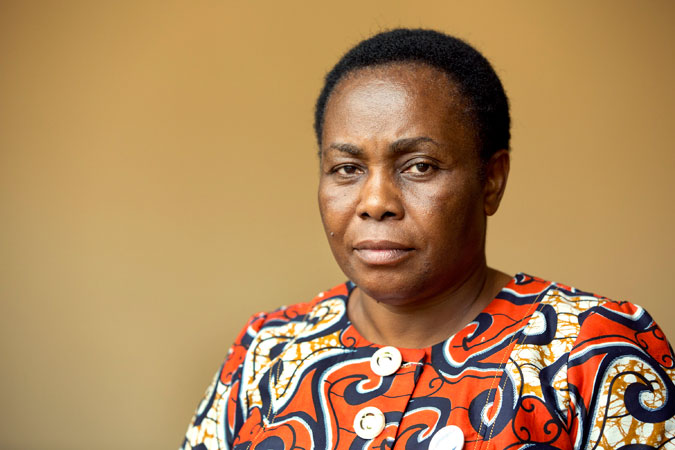 Julienne Lusenge is Director of the Fund for Congolese Women (FFC) and President of SOFEPADI in the Democratic Republic of the Congo, where she says “violence is a part of daily life”. In October 2015, she spoke about gender-based violence in conflict at the UN Security Council's Open Debate on Women, Peace and Security:

“Women are the first victims of war, but only they hold the unique key to peace. At the moment, women from Rutshuru and Beni in the North Kivu province of the RDC are assassinated, massacred, have their throats cut or stomachs ripped open, are raped and suffer sexual violence, are kidnapped and forced to become sex slaves. I can even give you the numbers; but one woman is already too many. I dream of the day when there will no longer be any weapons that support violence in my country.”  The full speech can be read here.

Ms. Lusenge later met with officials from UN Women to discuss the challenges and discrimination endured by Congolese women. In her own words…

“There has been a war in my country for 20 years, so there is no security. If we end this war we will have security. It is important for women to be part of the peacekeeping mission or be involved with every stage of the peace process. [Congolese women] are the first victims of war, but we observe and plan. Women work for the community. Their life revolves around the community. It is important that they have a role in the negotiations. They will think about the interests of the community as a whole. They will plan for tomorrow and for the community. But if they are not present, they cannot present their ideas. It is extremely important for them to be involved in the peace negotiations.

Another obstacle [for Congolese women] is political participation. Until now women have wanted to take part in elections and political life. There are few measures to support their efforts. Training is needed for these women. Poverty is also an issue. Women are poor. They want to go into politics but do not have the resources to campaign. How are they going to participate?

We cannot say that we have seen any real changes because until now women have been killed, raped and forced to become sex slaves. Leaders do not understand UN Security Council resolution 1325. … Resolution 1325 has allowed us to examine the community, observe men’s and women’s behaviour or attitudes to equality. We have also carried out surveys to identify the positions held by women in the administration and in villages.

The United Nations must provide sufficient means for UN Women to carry out its activities with women's groups, so that UN Women can help us to appeal to national or international authorities. UN Women must continue to support us, to share our experiences and give a voice to Congolese women. This will lead to peace.”

Disclaimer: The views expressed here are of the author and may not necessarily reflect those of UN Women.

Related News
14/05/2013
In the words of Saran Keïta Diakité: Girls receive a visit from a different man every night, a ‘new husband’
07/06/2013
Lakshmi Puri speech on Women Peace and Security
19/03/2013
Malian armed and security forces gear up to better protect women and children in conflict situations
27/07/2016
Empowering women key to preventing extremism in Jordan
22/03/2016
Statement by UN Women Executive Director Phumzile Mlambo-Ngcuka on the conviction of Jean-Pierre Bemba by the International Criminal Court
END_OF_DOCUMENT_TOKEN_TO_BE_REPLACED