In post-earthquake Ecuador, workshops and shelter visits seek to prevent violence against women

Quito—On 16 April, Ecuador was rattled by a devastating 7.8-magnitude earthquake, which has caused an estimated 650 deaths and left more than 25,000 people living in shelters.[1]

Emergencies often tend to exacerbate existing vulnerabilities to violence, as social and institutional protection systems can be severely disrupted, increasing the risk of gender-based violence in all its forms.[2]

Acting swiftly to address the protection of women and girls in the wake of the earthquake, UN Women Representative in Ecuador, Moni Pizani, traveled to affected areas to coordinate safe resettlement and recovery activities for women. She visited temporary shelters, as well as areas where new ones will be set up, to provide technical assistance and recommendations to improve the safety of women and girls housed there. 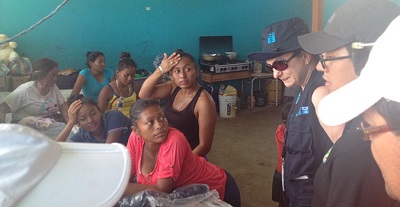 “The role of women in recovery after a disaster is critical because they build strong and resilient social fabrics,” said Ms. Pizani, after arriving in the hard-hit northern coastal town of Pedernales. “We must ensure their safety and welfare so that they can contribute with their full potential.”

Ecuador’s Ministries of Defense and the Interior, with the support of UN Women, UNHCR and UNFPA Country Offices, began offering training workshops this weekend on prevention of violence against women and girls, in particular those displaced during the declared state of emergency. The workshops aim to establish the principles and mechanisms so that state security officials can act to prevent and adequately respond to cases of violence against women and girls.

In its coordination with the United Nations system, UN Women is emphasizing the different needs of women in all aspects of humanitarian response planning and activities, with the successful inclusion of specific actions to prevent sexual, physical and psychological violence in shelters within the Flash appeal for financial support presented by the UN system.

In all areas of the response, UN Women is advocating for the mainstreaming of gender to ensure evidence of the priorities of women and girls is taken into account in emergency operations and response plans in the short and medium term, while also offering technical expertise, capacity-building for national actors, and securing safe spaces.

Related News
12/10/2016
Women are rebuilding Ecuador, literally
12/10/2016
Preparing for disasters, rebuilding in the aftermath
03/06/2016
Women entrepreneurs find hope in post-earthquake Ecuador
15/08/2022
In focus: Women in Afghanistan one year after the Taliban takeover
29/07/2022
Statement: Crises drive an increase in human trafficking – Here’s how we stop it
END_OF_DOCUMENT_TOKEN_TO_BE_REPLACED