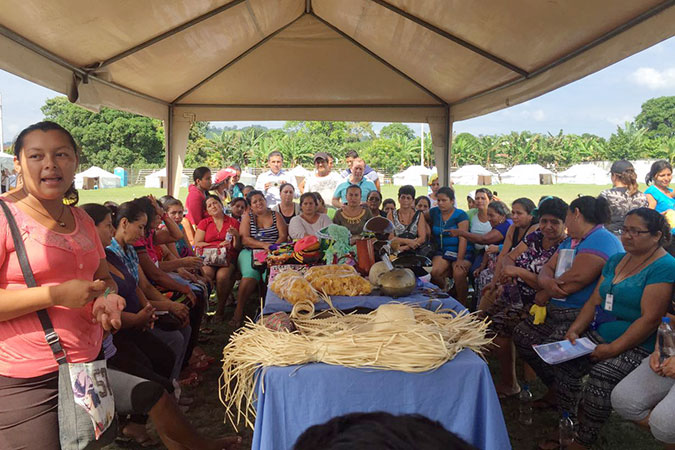 On the east coast of Ecuador, between cotton trees, tropical flowers and the raging sea, lies Manabí—one of the provinces hardest-hit by the earthquake of 16 April 2016, where hundreds of families have been left homeless.

Forty per cent of women in affected areas don’t have their own source of income. Many are heads of household who lost their homes and jobs because of the earthquake. Most of them are now living in shelters set up by the Ecuadorian Government and other cooperating agencies. According to Ecuadorian Government data, there were 28,775 people living in shelters as of May and a total of 5,824 families have been affected.

But they haven’t lost their enthusiasm or their drive to succeed. From 17-19 May, some 80 women from the towns of Calceta and Rocafuerte attended a training workshop entitled “Tools for my personal and business development”, organized by the Ministry of Justice in collaboration with UN Women.

Despite sweltering heat and adverse conditions, the women came to learn about managing microbusinesses, recovery costs, working hours, budgets and wage management, all with a view to setting up and operating a small business. After three days of classes, many already had a vision of the businesses they would establish. 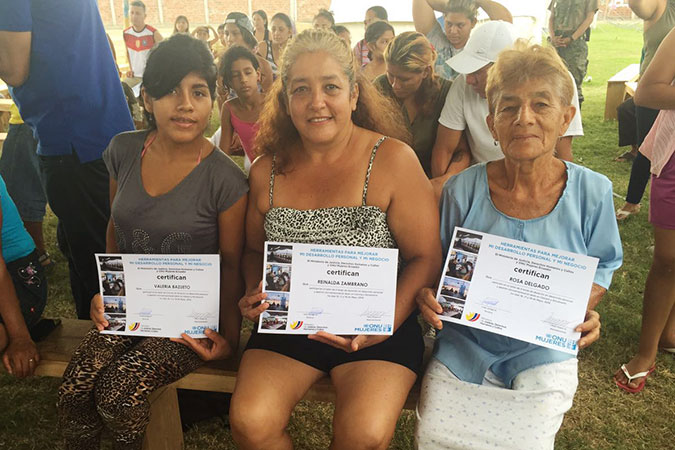 In Rocafuerte, Reinalda Zambrano had to move to a shelter because her house was damaged by the quake. The single mother earns a living through farming and sewing and manages to make ends meet for her children. She said the workshop helped “raise my self-esteem, to value myself as a human being and to appreciate my work”. She added that the knowledge gained will help increase her independence so she won’t have to “depend on a crop or the children's father” to feed and educate them. She is planning to set up a mending business in the coming months.

Nancy Álvarez, 40, from Calceta, is a nursery school teacher and, although she did not lose her home, she wants to support her community. Her children are grown so she is able to help care for the girls and boys in the shelter located in the municipal stadium. She says she feels very grateful for the motivation gained from the trainers to “be strong and start a new life”. With a big smile, she says that she will soon establish a small business selling fruit salads. “I've already worked out the investment and profit percentages. I’m determined to start this!”

In both towns, those attending the course accepted their completion certificates with joy, gratitude and the hope of seeing their dreams become reality.

“We became aware of the high potential of women who knew trades but who might need tools to improve their production,” says Moni Pizani, UN Women Representative in Ecuador, adding that the training programme was inspired by the very women living locally. “We normally see crises as a problem, but this one has provided many opportunities that we must seize! We are at their disposal to do whatever we can.”

This project, coupled with training for members of the Armed Forces and Police on the prevention of gender-based violence, is one of several providing tools to both empower and protect women and girls in the post-disaster period.

The workshops have been held in three locations in the province of Manabí, each attended by some 35 women. The office is planning to extend these courses over the coming months, in line with the needs of affected communities.

Related News
01/04/2020
From where I stand: “I am fearful for smaller countries that have limited resources during COVID-19”
12/10/2016
Women are rebuilding Ecuador, literally
19/08/2019
In Rwanda, weaving baskets and brighter futures
19/08/2019
Not waiting for handouts: Five stories of resilience from one of the world’s largest refugee camps
15/08/2018
Crisis update: Restoring dignity and livelihoods after storms in the Caribbean
END_OF_DOCUMENT_TOKEN_TO_BE_REPLACED