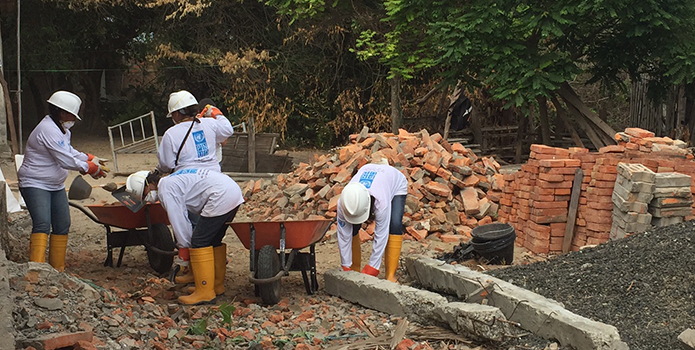 When 35-year-old Veronica Lucas Melo, along with three other women in her community, walked down the street wearing reflective jackets, boots and helmets, people stared in surprise. Mrs. Lucas Melo and her friends were nervous, but determined. They were about to show their families and community that women can rebuild Ecuador, literally.

On 16 April, 2016 a 7.8-magnitude earthquake hit Ecuador, impacting 720,000 people—half of them women and girls. According to government data, there were 28,775 people living in shelters one month after the earthquake.

Mrs. Lucas Melo lives in Las Gilces, a small community of 800 families located in the western part of the country, where nearly 100 homes needed to be demolished and rebuilt.

“They said that I was going to do nothing useful there, just bother everyone,” recalls Mrs. Lucas Melo, when she told her family that she was going to join the rebuilding effort. “They asked me, ‘what are you supposed to do in a place that’s for men?’” 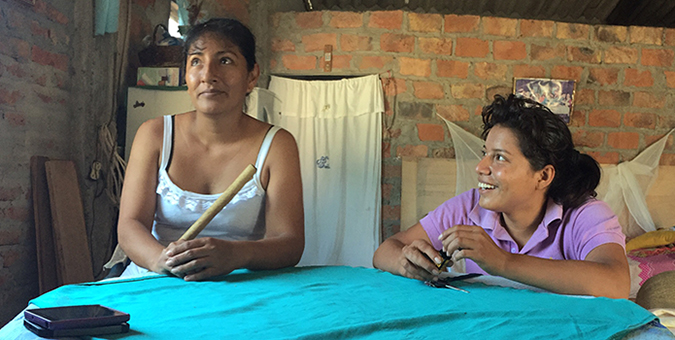 A mother of three children and a housewife, Mrs. Lucas Melo had never worked outside her home, let alone in construction, a male-dominated space. But her family relies on farming and climate variabilities and disasters have affected the crops. The little money they had saved was running out.

When Mrs. Lucas Melo heard about the joint UN programme, “Cash for Work,” seeking to reactivate the local economy, she saw her opportunity to gain new skills and find a new source of income for her family. Mrs. Lucas Melo joined the trainings provided by UN Women in Las Gilces and Manta, with the support of the Ecuadorian Ministry of Justice, in masonry and construction work.

On the first day of work, there was a nervous pause until Mrs. Lucas Melo picked up her tool to strike down a broken wall. The other women in the programme cheered and joined her to complete the task. “Men began to take us seriously. They didn’t see us as weak anymore and worked with us as a team,” she shared.

To date, the programme has trained and certified 48 people from earthquake-affected communities. Upon completion of their training, participants are registered in an employment database of local people available for rebuilding works. In fact, 12 of the trained women are currently rebuilding the centre of social rehabilitation “El Rodeo” in the city of Portoviejo. Additionally, Save the Children, a partner organization active in Ecuador, intends to hire trained women to build 20 community centres by the end of the year. 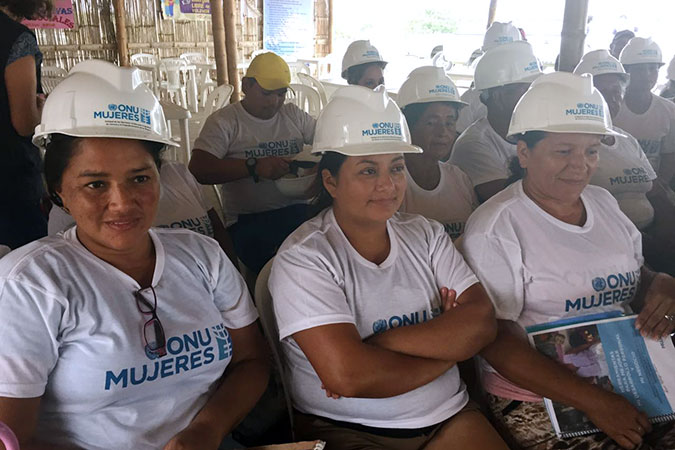 Women during a construction and masonry class in Los Esteros shelter, in the city of Manta. Photo: UN Women/Romina Garzón

“Recovery time after a crisis presents a unique opportunity to lay the foundations for promoting the autonomy and economic empowerment of women. It’s a chance to dismantle gender stereotypes and build more equal societies,” emphasized UN Women Ecuador representative Moni Pizani. “Empowering women is a way to prevent violence and ensure a better future for them,” she added.

In May, UN Women in Ecuador also organized a training workshop, “Tools for my personal and business development”, in collaboration with the Ministry of Justice, which provided entrepreneurship skills to 80 women from the nearby Calceta and Rocafuerte communities. “The trainings showed us that we must not fear the crisis but seize the opportunity to support our families,” said Maria Mora, 34, from Calceta, who participated in the training. UN Women is also supporting efforts to strengthen women’s participation in the governance of shelters and training police and security forces to prevent and address gender-based violence.

For Mrs. Lucas Melo, so much has changed since her participation in the programme—she earns $120 per month to supplement her family’s income and feels confident of her abilities. Today, she is considered a key player in her community.

Related News
03/06/2016
Women entrepreneurs find hope in post-earthquake Ecuador
01/04/2020
From where I stand: “I am fearful for smaller countries that have limited resources during COVID-19”
15/08/2018
Crisis update: Restoring dignity and livelihoods after storms in the Caribbean
12/10/2016
Preparing for disasters, rebuilding in the aftermath
26/04/2016
In post-earthquake Ecuador, workshops and shelter visits seek to prevent violence against women
END_OF_DOCUMENT_TOKEN_TO_BE_REPLACED