Network of Women, Peace and Security focal points meets for the first time to spur progress on the agenda 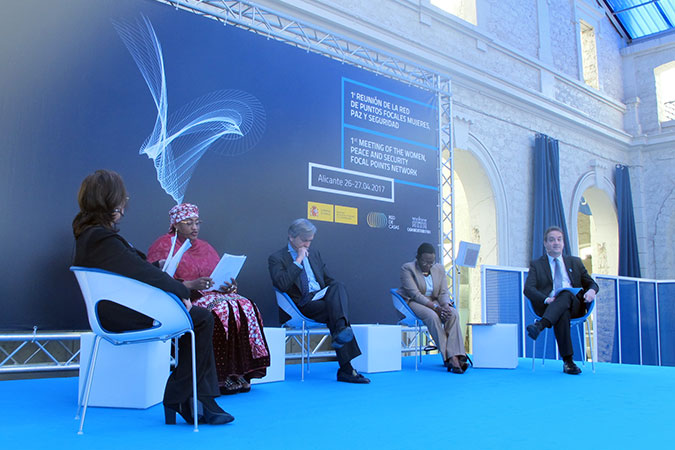 Participants at the opening plenary of the first meeting of the Women, Peace and Security Focal Points Network, in Alicante (Spain), from left to right: Diosita T. Andot, Undersecretary for Peacebuilding and Development and Director of the Office of the Presidential Adviser on the Peace Process of the Philippines; Senator Aisha Jummai Alhassan, Minister of Women Affairs and Social Development of Nigeria; Ambassador Roman Oyarzun Marchesi, Permanent Representative of Spain to the United Nations; Ambassador Selma Ashipala-Musvayi, Permanent Secretary of the Ministry of International Relations and Cooperation of Namibia and Yannick Glemarec, Deputy Executive Director for Policy and Programme for UN Women. The plenary framed the meeting’s focus on national policies on women, peace, and security, emphasizing the need to share lessons learned and solutions from across countries and regions. Photo Courtesy of Casa Mediterráneo

UN Women’s Deputy Executive Director Yannick Glemarec will participate in the opening plenary of the two-day event. The National Focal Point Network will facilitate exchange of experiences and best practices to advance women’s participation in national-level peace and security policies and programmes. The meeting will focus on how to integrate existing international commitments into domestic policies and normative frameworks and to address challenges in their implementation.

Women are not only victims of conflicts, but also powerful agents for peace. They play a crucial role in bolstering conflict prevention, leading efforts aimed at preventive dialogue and act as early warning systems. In the long term, they can provide a more comprehensive understanding of the causes and solutions to a conflict, as well as promote actions aimed at conflict resolution. Yet their presence is often lacking in formal peacebuilding efforts. The discussions at the National Focal Point Network meeting will include strategies on how to close the gaps between research and practice on this issue. The meeting will also be an opportunity to improve the coordination of funding and assistance programmes in this area of work.

The Network will meet once a year in one of its Member States. Following the first in-country meeting in Spain, Germany has offered to host the second one in 2018.

The WPS National Focal Points Network was announced as one of Spain’s national commitments in relation to the women and peace and security agenda at the high-level review of the implementation of Security Council resolution 1325 (2000), which took place in October 2015.