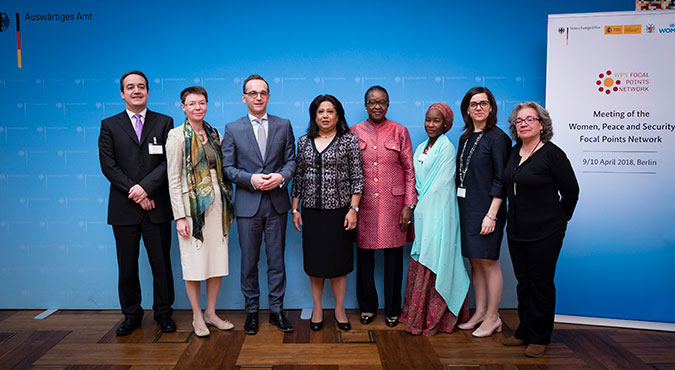 About 150 representatives from UN Member States, regional and international organizations and civil society from around the world met in Berlin, Germany, for the annual capital-level Women, Peace and Security Focal Points Network (WPS-FPN) meeting on April 9-10, 2018.

The Network, initiated by Spain in 2015 during the high-level review of the implementation of Security Council resolution 1325 and launched in 2016, serves as a cross-regional forum to exchange experiences and best practices to advance the implementation of the UN agenda on women, peace and security, and to improve coordination of funding and assistance to programmes.

Today, women remain a minority in all peace processes, representing only 4 per cent of the military component of UN peacekeeping missions, and 10 per cent of the police component. Despite increases since 2010, the percentage of gender-specific provisions in peace agreements declined in 2016. Violations against women human rights defenders persist and access of women and girls to justice and security remains hindered. In addition, harmful gender norms and structural barriers continue to contribute to inequalities and violence. Women in peacekeeping operations have been found to increase the credibility of forces, gain access to communities and vital information, and lead to an increase in reporting of sexual and gender-based crimes.

In his opening address, Heiko Maas, German Foreign Minister, emphasized that “Women can and must play an active role in conflict prevention, peace talks, reconstruction, reconciliation in societies and particularly in post­conflict situations.” He noted that one objective of the meeting was to “highlight how alliances can promote this agenda – alliances with regional organizations or strong partners such as the G7, with other networks and initiatives, but also, and very importantly, with civil society.”

Organized by Germany as current Chair of the Network, in close collaboration with Spain, Namibia and UN Women, the meeting focused on “Building Alliances to Advance the Women, Peace and Security Agenda” deepening the discussion on accountability mechanisms for conflict-related sexual and gender-based violence. Resources, professionalization of data collection and evidence finding were highlighted as key to promoting accountability, while comprehensive gender-sensitive conflict analysis and budgeting processes were highlighted as mechanisms to help ensure the implementation of strategic priorities and appropriate financing for the women, peace and security agenda across sectors.

In her keynote address on the second day, Swedish Foreign Minister Margot Wallström underlined that “Gender equality is the issue of our time. It is not a women issue, it is a peace and security issue.”

UN Women Deputy Executive Director for Policy and Programme, Yannick Glemarec, urged participants to seize the opportunities offered by the Network to effect tangible changes in the way challenges of implementing the Women, Peace and Security agenda are addressed.

During the meeting, the Focal Points reflected on the critical need for streamlining the different reporting mechanisms and consultation processes on women, peace and security to foster an enabling environment for accountability by Member States and regional organizations. At the local level, they advise for specific timelines, aligned indicators, adequate budgets and the active involvement of civil society actors as key components for successful national action plans.

The Focal Points agreed on key actions for the Network from the meeting, which is reflected in a joint communiqué, which will be issued as an official document of the UN Security Council.

In closing remarks, Selma Ashipala-Musavyi, Permanent Secretary of the Ministry of International Relations and Cooperation of Namibia, who will Chair the Network in 2019, said of the Network, “We are there to show the way for women to never give up hope.” The Network is expected to host additional meetings in New York in the coming months and during the 73rd session of the United Nations General Assembly.

Related News
08/03/2022
Speech: We must give peace a chance
24/04/2018
Remarks by UN Women Deputy Executive Director Yannick Glemarec at side event during the second Syria conference in Brussels
20/09/2017
In the words of Magda Alberto: “The idea of a more just, democratic society…comes hand in hand with equality for women”
30/06/2022
One year from the Generation Equality Forum: where are we now?
30/06/2022
One year driving action for gender equality. One year of Generation Equality.
END_OF_DOCUMENT_TOKEN_TO_BE_REPLACED