Generations of progress for women and girls could be lost to COVID pandemic, UN chief warns

Highlighting the disproportionate and devastating socio-economic impact of COVID-19 on women and girls globally, The UN chief António Guterres called on Monday for a major push to prevent “years, even generations” worth of progress on women’s empowerment, from being lost to the pandemic. 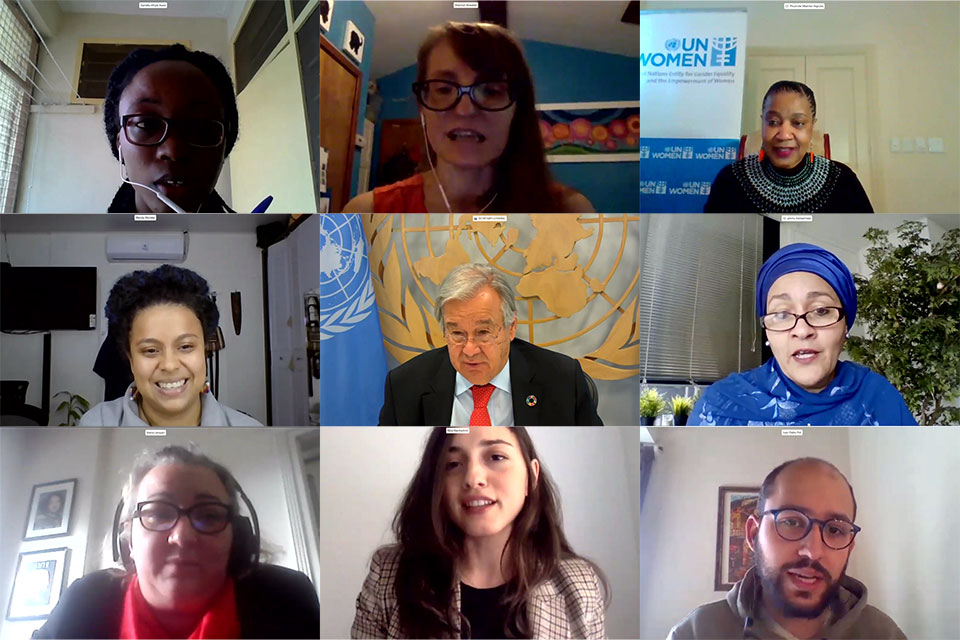 In an address to a virtual town hall with young women from civil society organizations, the Secretary-General said that the global pandemic has already reversed decades of limited and fragile progress on gender equality and women’s rights.

“Without a concerned response, we risk losing a generation or more of gains”, he cautioned.

Patriarchy is an obstacle to the development of society. - @UN Secretary-General @antonioguterres

Mr. Guterres underscored the vital role played by women, as healthcare workers, essential staff, teachers and carers, helping millions globally – both within and outside their homes.

However, few are recognized due to persisting inequalities and biases. At the same time, many women working in the informal sector have been thrown into financial insecurity, without regular income or effective social safety nets.

“The pandemic has exposed the extent of its impact on physical and mental health, education and labour force participation”, said Mr. Guterres, amid disturbing reports from around the world of skyrocketing gender-based violence, “as many women are effectively confined with their abusers, while resources and support services are redirected”.

“In short, the pandemic is exposing and exacerbating the considerable hurdles women face in achieving their rights and fulfilling their potential”, he said.

Monday’s town hall meeting is a regular fixture on the UN calendar, but generally organized on the side-lines of the annual session of the Commission on the Status of Women. This year, however, it was postponed due to the pandemic and held virtually, with thousands of women activists and defenders of women’s rights participating remotely.

The Secretary-General underlined that his main objective during the town hall was to listen, not talk, and he encouraged participants to ask questions and share their opinions.

Martha, an activist from Poland, spoke of the rise of populism and nationalism in Europe which is putting democracy and human rights at risk. She wondered how to address this challenge, especially amid a global crisis.

Like the UN chief, Nina from Georgia agreed that women’s work is undervalued, and that the pandemic has placed additional responsibilities on them.

“While we are trying to unpack what a pandemic has caused, I think it is important for us to once again understand the invisible barriers that women are facing for their economic empowerment,” she said.

Some participants submitted written questions which were read out by Phumzile Mlambo-Ngcuka, head of UN Women, the UN agency which promotes gender equality globally.

Issues raised covered the rise in teenage pregnancy during the pandemic, protection of human rights defenders, support for people with disabilities, and the need to fight racism.

&ldquoWe are delighted that women across the world have this opportunity to speak to the UN Secretary-General at this time about their issues and concerns, and to hear from him. While today’s Town Hall attempts to connect women, girls and non-binary people across the world with the UN Secretary-General, it is also a moment to recognize the voices of all those who are not in the ‘room’ and whose needs and concerns we all continue to fight for and champion, in every arena. Civil society and the women’s movements are unflinching partners in the drive to name and tackle the inequalities that have grown under COVID-19, and to put women at the centre of recovery.”, said Ms. Mlambo-Ngcuka, who served as the event’s moderator.

“Civil society and the women’s movements are unflinching partners in the drive to name and tackle the inequalities that have grown under  COVID-19, and to put women at the centre of recovery.”

Women and girls at the centre of rebuilding

In his remarks, the UN chief recalled the UN’s policy brief issued in April, which urged governments to put women and girls – their inclusion, representation, rights, and protection – at the centre of all efforts to tackle and recover from COVID-19.

The first phase, Mr. Guterres said, was for nations to take a “holistic view” of the pandemic’s health impact.

“All women have a right to quality, affordable sexual and reproductive health services. Governments have a responsibility to make sure women and girls can access these services, even during a crisis”, he said, calling for health systems that meet the needs and realities of all – including women and girls.

Equally important is putting money into the hands of women working in both formal and informal economies, the UN chief continued.

“Cash transfers, credits and loans should be targeted at women, to mitigate the immediate impact of job losses and increased caring responsibilities”, he said.

Governments should expand social safety nets and recognize the value of invisible and unpaid care work, as they inject stimulus funds to get their economies back to work.

He highlighted that the pandemic has demonstrated “what we all know”, that millennia of patriarchy have resulted in a male-dominated world with a male-dominated culture that damages everyone – women, men, girls and boys.

“It is clear that we cannot go back to the failed policies that have resulted in the fragility we see around us – in healthcare systems, in social protection, in access to justice. This is the time to rebuild more equal, inclusive, and resilient societies. Our roadmap is the 2030 Agenda for Sustainable Development”, the UN chief declared.

“We need to take the opportunity of an economic reset to ensure the rights to life, dignity, and security for everyone.”

Alongside governments, the private sector, academic institutions and civil society, should be fully engaged in recovering better, Mr. Guterres said.

He called for protecting and expanding the civic space so that civil society organizations can play their full part.

“We must also emerge from this crisis with women’s equal leadership and representation,” added the UN chief.

He went on to recognize women leaders, officials and health workers for their empathy, compassion, communication and evidence-based decision-making, fighting the ravages of the  coronavirus.

“Their actions are showing the value of inclusivity. It stands to reason: doubling the resources, capacity and expertise we put into decision-making benefits everyone”, the UN chief said, calling for gender parity and bringing more women into leadership positions.

The Secretary-General noted that 2020 marks several important landmarks. It is the twenty-fifth anniversary of the Beijing Declaration; the twentieth anniversary of Security Council Resolution 1325 on Women, Peace and Security; and the first year of the Decade of Action on the Sustainable Development Goals (SDGs) – key achievements in gender equality and women’s empowerment.

In that vein, he reinforced his determination to advance women’s priorities and to ensure their equal rights and participation in the peace and security agenda, on climate change, on building inclusive economies, and on reducing and eliminating the digital divide so that women have an equal role in designing technologies of the future.