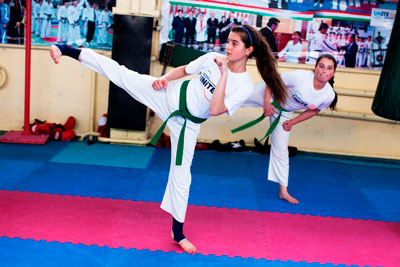 DUSHANBE, Tajikistan – “Strong men respect women.” These were the words of World Taekwondo Champion Daler Tyuryaev, who is helping to lead a movement of martial artists in the battle against gender-based violence and discrimination in Tajikistan.

Mr. Tyuryaev, 28, is a prominent member of the National Taekwondo and Kickboxing Federation of Tajikistan (NTKF), which has partnered with UNFPA and the UN Country Team to promote gender equality and prevent gender-based violence. ... The network, initiated by the NTKF, is supported by UNFPA, UN Women and other UN agencies.

“Summer camps,” for example, have been organized to train martial artists in gender equality, violence prevention, community organizing and public speaking. Equipped with these tools, the fighters – mostly men – speak out against gender inequality and violence at martial arts lessons, matches and public gatherings. They also appeal to the public in videos and major media campaigns.

To keep reading, visit the UNFPA website, where this story was originally posted.

Related News
15/11/2021
Empowering students in Albanian schools through self-defense training
26/10/2016
In Albania, football and a mobile app get men to commit to gender equality
17/06/2015
Biking to give youth a voice in the post-2015 roadmap
12/06/2015
UN Women stresses women’s role in water management at the Water for Life Conference
28/05/2015
Clad in new UN Women-branded jerseys, Valencia Football Club scores
END_OF_DOCUMENT_TOKEN_TO_BE_REPLACED