Biking to give youth a voice in the post-2015 roadmap 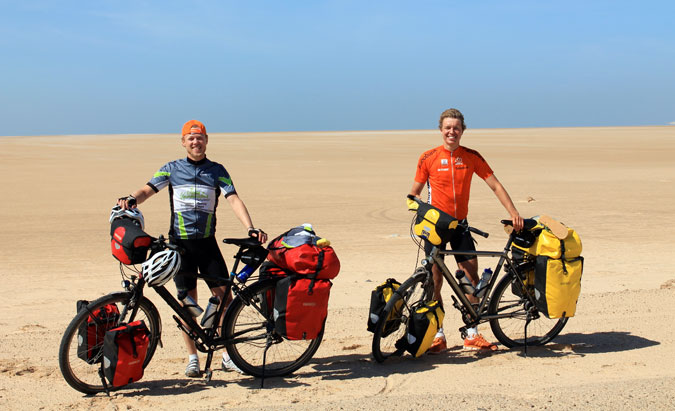 From snow-covered fields in Europe to desert landscapes in the Sahara, Jilt Schayik and Teun Meulepas are on a cycling mission from Europe to the southern tip of Africa to tap into what youth want for their future. Photo courtesy of Teun Meulepas.

From Amsterdam to Cape Town, across northern and western Europe, and along Africa’s western coast­, UN Youth Delegate Jilt Van Schayik and his friend Teun Meulepas are on a journey through 20 countries to hear what youth have and want to say about the post-2015 agenda.

“Far away from our realities, far away from New York, there is a world of young people whose voices have never been heard. As a youth delegate and a citizen of the world, I feel it is my duty to connect young people from all walks of life with the United Nations. My grandfather used to say to me: ‘actions, not words’. Therefore I do not only use nice words, but also decided to act,” says Jilt.

To that end, Jilt and his friend Teun founded Building Bridges, a cycling project focused on finding out what the priorities of young people are at the grass-roots level and how these can be broadcast to the world. Formally launched at UN headquarters in New York in February, during the ECOSOC Youth Forum, Building Bridges received logistical and networking support from UN Women, UN DESA, the Youth Focal Point's Office, the Dutch Embassies and UN Information Centres in the countries they will visit. 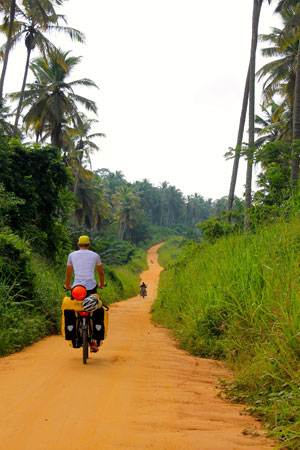 Cycling through Ghana in May, Jilt and Teun cycle along long scenic routes between stops where they engage with youth. Photo courtesy of Teun Meulepas.

Currently in Gabon, Jilt and Teun have been cycling since 23 February and are scheduled to reach Cape Town, South Africa by World Youth Day, 12 August. UN Women and UNiTE staff in Africa, the Building Bridges team, the Municipality of Cape Town and the Netherlands Embassy are jointly organizing an event to receive the cyclists at the end of their journey.

UN Women has been liaising with Jilt, providing advice and guidance on how to reflect on gender equality in his discussions with youth, as well as communications support through its social media networks. Jilt has also received advice from UN Women Director of Resource Mobilization, Antonie de Jong, who rode as part of a motorcycle caravan of 20 men across nine countries in southern Africa, covering 8,200 km from 25 November to 10 December 2012. In partnership with Harley Davidson Johannesburg, they set out to raise awareness during the 16 Days of Activism for the UN Secretary-General’s UNiTE to End Violence against Women campaign.

With support from the Dutch Government, funding from private sponsors, and guidance from civil society organizations, project coordinators identified proactive youth leaders to act as ambassadors on all 20 stops. They host and partake in two-day grass-roots consultations and events when the team of cyclists arrive. These youth ambassadors share the views of the youth in their community through social media. Ultimately, they take ownership of the project, championing their vision for a better world among peers and wider community long after the visit has concluded.

Through Twitter tweets, Building Bridges blog features, and Humans of MY World Facebook posts, young people are sharing their stories and their priorities, including gender, for the post-2015 roadmap. In September 2015, the team will present the outcomes during the UN General Assembly in New York and hope to inspire world leaders to include the voices of young women and men in the new post-2015 agenda. They also hope to create a sustainable youth network that connects young people across two continents, 20 countries and over 17,000 km. The network aims to foster youth participation and the position of women in society.

Related News
09/12/2015
Fathers in Turkey foster violence-free families and gender equality
15/06/2015
Civil society dialogue heeds strong commitment to ending child marriage in Africa
07/10/2021
From where I stand: “I want to leave a significant imprint in the society”
07/10/2021
Math olympic medalist Adelina Andrei: It is very important to contribute to the empowerment of women and girls by example
28/06/2021
Winners of the comic and cartoon competition, “Generation Equality: Picture It!”
END_OF_DOCUMENT_TOKEN_TO_BE_REPLACED