“Ride on! Speak Out!”: Nine countries, 15 bikers, one issue – ending violence against women

“We need millions of men as agents of change and we have many rivers and oceans to cross before we get there,” says Antonie de Jong, Director of Resource Mobilisation at UN Women and one of the 15 men who rode as part of a motorcycle caravan across nine countries in southern Africa. 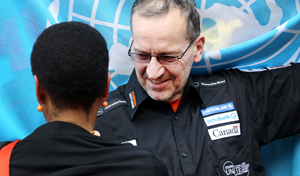 Their mission: to raise awareness about violence against women and girls. On average, seven in 10 women are beaten, coerced into sex or otherwise abused by an intimate partner over the course of her lifetime.[i]

Timed to coincide with the 16 Days of Activism to End Violence against Women, commemorated each year starting 25 November, the Ride On! Speak Out! UNiTE to End Violence against Women and Girls initiative was one of the first of its kind. Organized by Harley-Davidson Johannesburg and UN Women, the ride covered 8,200 km (over 5,000 miles) along their journey from 25 November to 10 December 2012.

With passion and purpose, the group rode across Botswana, Namibia, Zambia, Malawi, Mozambique, Zimbabwe, South Africa, Swaziland and Lesotho. Riders stopped along the way to visit shelters for abused women, take part in rallies and meet with men’s and women’s groups. Twenty sponsors provided essentials such as a van to carry belongings and spare tires as well as funding for food, lodging and petrol.

“The general consensus is that bikers are big and tough. The fact is that bikers can spread the message that it’s not cool to beat women,” said Peter Hood of UNFPA, who took part in the ride. “This is men reaching out to men.”

Hood described the experience of meeting survivors at women’s shelters as humbling. “We all have mothers, daughters and wives. No one wants violence to happen to them. And we want to spread the word that no one has to put up with violence,” he said.

He added that the band of bikers made jaws drop as they pulled into gas stations and eateries along their route because there are few Harleys in Africa and their engines are very loud. The bikers kept a blog and updated it when possible.

Bikers of the “Ride On! Speak Out” UNiTE event to End Violence against Women and Girls take part in a ‘flag off’ ceremony in South Africa on 23 December, 2012. Photo credit: Shipyard Productions

Frans Pieterse summarized their mission in three words when he spoke at a rally in Swaziland: “Educate, communicate and eradicate.” He said these are long and deep processes to which men must be as committed as women. “Hopefully, this trip will give rise to many men joining our cause. In any event, we are confident to connect the men groups and bikers’ associations we discovered in all nine countries we visited. They will reinforce each other and make sure the 16 days of activism will become 365 days of activism.”

De Jong and Redawaan Hendricks, with UN Women Johannesburg, came up with the idea for the bike trip when they took part in a Mount Kilimanjaro climb last March to raise awareness about gender-based violence. “I got the idea on my way down. I talked it over with my roommate on the trip [Hendricks] and he liked the concept. He invented the slogan and found Harley willing to sponsor.”

De Jong says that awareness-raising and fundraising go hand-in-hand. The group raised some funds for the UN Trust Fund to End Violence against Women. They also met with the Permanent Secretaries of Gender in both Lesotho and Mozambique – both men – who were very keen to make a difference for women. To reinforce the importance of men speaking up against violence, they also met with groups such as the Swazi Boys bikers’ association of Swaziland, which has adopted an orphanage and was also keen to support the caravan’s cause. 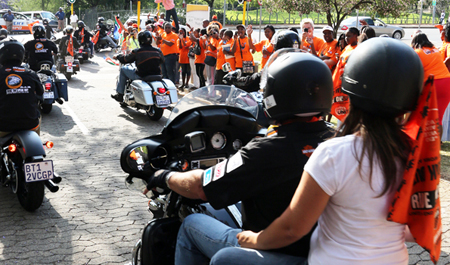 But for the bikers this ride was just the first. There is much more in the pipeline – with another ride planned for Valentine’s Day, to include female riders this time. Another initiative involves a trip from Harley Davidson’s headquarters in Milwaukee, Wisconsin, to Johannesburg, and possibly even a round-the-world trip, which could take more than 12 months.

“We will cherish the unspeakable beauty of the landscapes, the camaraderie and the strong belief in our cause forever. We will think of and pray for the women who suffer in silence and we never lose hope that something positive will be done soon to improve their situation,” said de Jong. “It might take another 10 years or maybe even a whole generation for huge change, but it’s a start.”

Related News
21/08/2017
From where I stand: “The violence that marked my childhood made me the activist I am today”
29/05/2015
UN Women Executive Director Phumzile Mlambo-Ngcuka to co-chair World Economic Forum during visit to South Africa
21/11/2013
In Rwanda, men work to change attitudes and confront gender-based violence
03/07/2013
Men in the kitchen: cooking up change in Mozambique
05/02/2013
In the words of Mwasapi Kihongosi: How ending violence against women and girls became my passion
END_OF_DOCUMENT_TOKEN_TO_BE_REPLACED