Nearly 3,000 local leaders have been educated and engaged to fight gender-based violence by promoting the concept of “positive masculinity”.

"I wished for death to take me away, because my husband oppressed me,” recalls Berancille Mukabandora, who today is the Vice-president of an association that fights gender-based violence in the Gakenke District, in northern Rwanda. She sits authoritatively at a table with several men from a cooperative. Berancille and her male colleagues received training from the Rwanda Men’s Resource Centre, RWAMREC, a key UN Women partner in the fight against gender-based violence.

The training taught Berancille and her husband about rights and how to share domestic work. “I started to feel confident after the RWAMREC trainings,” she says. “I can now decide to build a house and do it. … Even the children changed. I have five daughters and they all know that if the toilet falls down, we cannot wait for the families who have boys to come and fix it. They can help me make bricks and we can build a toilet.”

Despite progress in other areas of gender equality, gender-based violence in Rwanda remains high, with 48 per cent of women aged 15-49 having experienced physical or sexual violence in their lifetime, according to Rwanda’s 2010 Health and Demographic Survey. 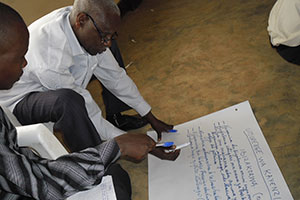 The Rwanda Men's Resource Centre trains men to change negative and violent behaviour. During the trainings, plans are formulated on how to address gender-based violence at the community level. Photo courtesy of Rwanda Men’s Resource Centre

RWAMREC is a local, grass-roots organization founded in 2006 by a group of Rwandan men who wanted to engage men in gender issues and promote ‘positive masculinity’, which encourages men to be loving, caring fathers and partners who are supportive of gender equality and women’s empowerment. RWAMREC educates and mobilizes entire communities to reject violence and redefine masculine identity.

Edouard Munyamaliza, the Executive Secretary of RWAMREC, says many men engage in negative masculinities, and violence, because they fear social punishment: “If I don’t behave like this, the community will disqualify me as a man.” He says a positive, non-violent understanding of masculinity is the starting point towards fighting gender-based violence. Then, men can be engaged to oppose harmful traditional norms or practices.

“Because of what we were taught, we thought that properties belonged to a man; the woman had no say,” explains one male cooperative worker trained by RWAMREC. “My family is peaceful now and we came to know that wives are our colleagues. We are one person with our wives and because they are one of us; we cannot harm them.”

With the assistance of UN Women, RWAMREC has trained 3,000 local leaders on gender-based violence. These men and women were elected to local government at all levels, and are highly influential in their communities.

Training sessions last between two to four days and are voluntary. At first, gender-separate trainings are conducted to give men and women an opportunity to express themselves in a comfortable setting. They are then brought together for a range of participatory activities and discussion of women’s rights, men’s role in promoting women’s rights, gender-based violence laws, and traditional norms and practices that give excess power to men.

Issues of masculinity are also tackled, as are “femininities”. RWAMREC staff note that many Rwandan women feel they need to accept violence to keep the household and the family together. At the beginning of the trainings, many women viewed their husbands not as partners, but as “chiefs”.

After the trainings, women report that gender-based violence has drastically reduced in their households. They also have newfound support from their husbands to make decisions and engage in economic and social activities.

RWAMREC trainings often incorporate role-play, such as men carrying a toy child on their back while having to cook, clean and farm. Shamsi Kazimbaya, a project coordinator and training facilitator, notes that role-play helps men to better understand how overwhelming multiple roles can be. At the end of the trainings, participants create and commit to an action plan to run gender-based violence education in local groups.

RWAMREC facilitators emphasize that they are not law enforcement officials and often share personal stories with training groups, which helps foster a sense of connection. They find that the best way to get men engaged is to have them realize that all men are affected by traditional norms, including the facilitator himself.

“At first, many men fall back on cultural justifications for spousal discipline to explain their abuse,” says Silas Ngayaboshya, a RWAMREC facilitator. In his trainings, he often asks men to show him where discrimination against women is written in their culture.

RWAMREC has been at the forefront of engaging men in gender issues in Rwanda, with the support of the Government of Rwanda and UN Women, among other partners. UN Women also provides financial and technical support to enhance the capacities of local community leaders.

For more information on UN Women's efforts to end violence against women, please visit our special In Focus compilation for 25 November, International Day for the Elimination of Violence against Women.