On the front lines of COVID-19, women’s organizations provide vital services as first responders as violence against women spikes 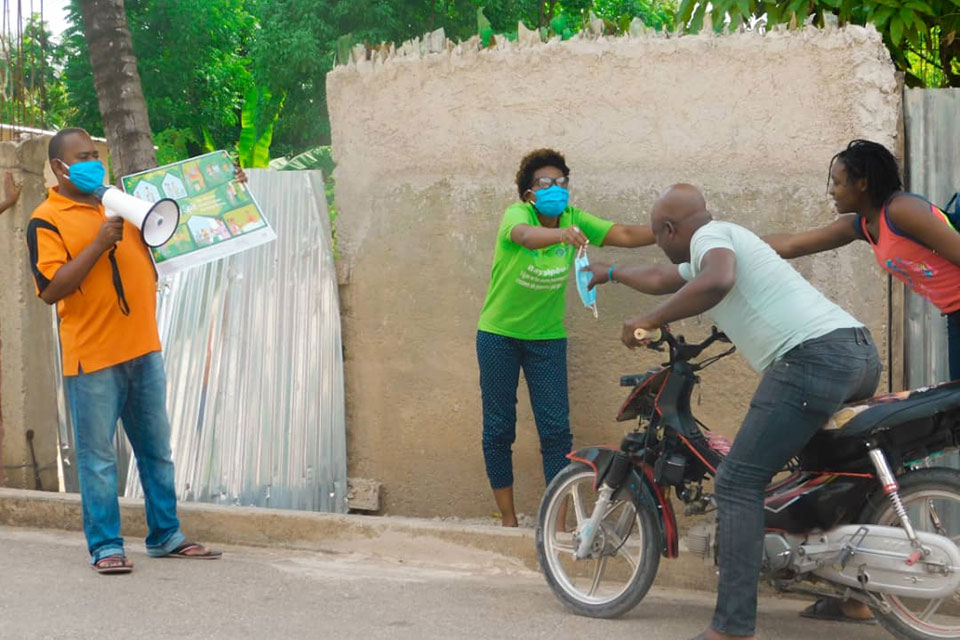 In Haiti, UN Trust Fund Grantee Beyond Borders has adapted their work to spread awareness on COVID-19 and distribute face masks to protect people in public spaces. Photo: Beyond Borders.

The call came in at 10 p.m.—two hours after the COVID-19 curfew in Bosnia and Herzegovina in March. The caller was noticeably shaken, after being thrown across the room and having her hair ripped out by her ex-husband—all in front of her children, aged 10 and 15. The  woman and her children fled and stood outside in T-shirts and slippers until a neighbour offered them shelter.

She called the police, but they told her that they wouldn’t bring her ex-husband in or issue a restraining order because they were no longer married.

Her next call was to the Centre of Women’s Rights, funded by the UN Trust Fund to End Violence against Women (UN Trust Fund), which immediately connected her with a lawyer and a therapist. 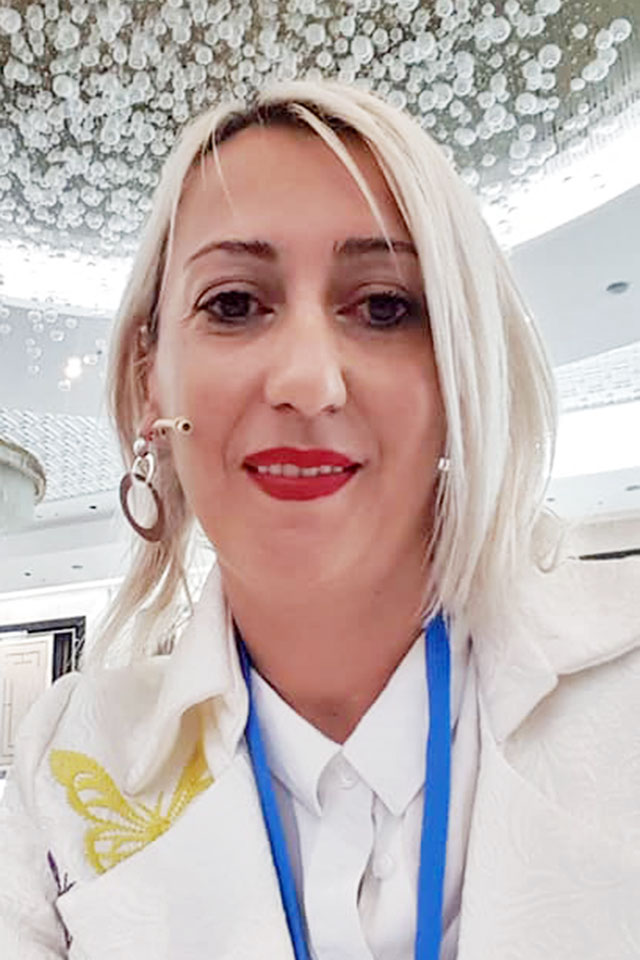 “If we didn’t intervene and provide the woman with guidance … this report of violence could have gone off the radar because of the insensitivity and ignorance of the police officer. It could have ended in a fatal outcome,” says Meliha Sendic, President of the Centre of Women’s Rights, adding that COVID-19 has exposed “long-standing institutional issues we have been pointing out for years.”

The Centre has responded by facilitating a free phone line for legal aid and psychological support for victims/survivors of violence, available daily from 8 a.m. until midnight, and its staff is also providing online legal support and immediate assistance  via Viber or Messenger (chat platforms). They have engaged volunteer therapists and continue educating police in Sarajevo through a distance-learning platform.

The Centre is among the 144 grantees of the UN Trust Fund, which is managed by UN Women on behalf of the UN system in 69 countries and territories, that have had to adapt their services to assist survivors of violence in the face of COVID-19 lockdowns. The stay-at-home orders have isolated survivors with their abusers and led to increased reports of domestic violence around the world.

With health and social systems overwhelmed and courts closed in many countries, women’s organizations have stepped in as first responders. They are also having to learn and adapt to new technology to support survivors.

In neighbouring Serbia, UN Trust Fund grantee Association Fenomena reached out to other women’s organizations providing specialized services, creating an emergency ad-hoc coalition. Programme Coordinator Marija Petronijević said, “In general, NGOs are facing a lack of capacity to adequately respond to emergency crises: lack of IT knowledge and equipment, emergency-related working protocols, as well as lack of staff and funding”.

She also noted that COVID-19 pandemic has exacerbated existing gaps and challenges in institutional services, and even as NGOs see spikes in reports of intimate partner violence, the issue is not as visible or widely discussed in the public domain.

Association Fenomena is running a 24/7 SOS hotline and awareness campaigns, including a new social media campaign on the need to report violence. They’ve been reaching out to women’s networks and the local media, while gathering data on public responses to violence.

They have also developed a partnership with pharmacies and pharmacists to inform and help women survivors access safety planning tools and support services. “We expect that this model will be useful during the health crisis, as well as post-crisis,” says Petronijević.

Adapting services to better serve survivors, even as women’s organizations struggle to survive

On 16 April, the UN Trust Fund held an online Stakeholder Community Exchange, during which several grantees shared how they’re adapting to COVID-19. Among them was Rashmi Singh, Programme Director of the International Foundation for Crime Prevention and Victim Care (PCVC), which provides holistic physical and psychosocial services to women burn survivors in Tamil Nadu, India.

She explained that many burn wards have been converted into COVID-19 wards and her organization has had to cut down hospital visits from three days to one day a week. They have also had to temporarily suspend home visits and wound care, to ensure the safety of staff and immuno-compromised survivors.

In addition, her organization has expanded their hotline hours and shifted to phone or video follow-ups with clients, where possible. Singh says there has been a three-fold increase in calls or online chats because it is more difficult than ever for survivors to leave their homes.

In a rapid assessment completed by grantees of the UN Trust Fund, organizations are reporting increased violence against women and girls, as well as rising hunger and poverty. For instance, in Malawi, school closures are making girls more vulnerable to sexual harassment, exploitation and child marriage. 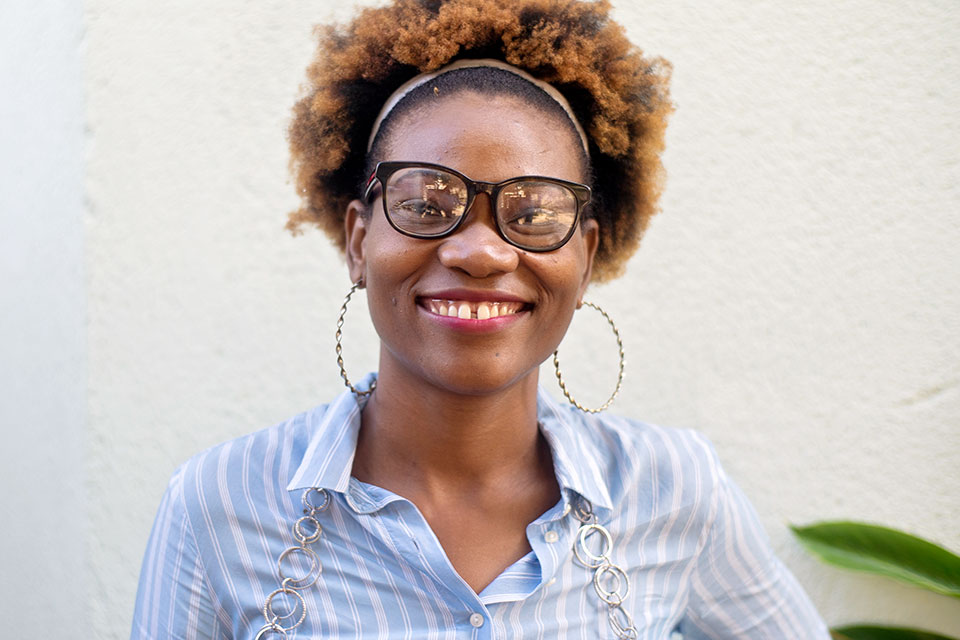 And women with disabilities are particularly at-risk. Emanuela Paul, Programme Coordinator with  Beyond Borders in Haiti, says her organization has had to adapt its methods in light of the pandemic, creating self-filmed videos, radio spots, social media memes, megaphone campaigns and quick chat conversation guides.

In Rwanda, Mushimiyimana Gaudence, co-founder and Executive Director of the Rwanda Organization of Women with disabilities (UNABU), says many women and girls with disabilities fear sexual violence and are going without food, but her organization has no budget for such support. She also worries about UNABU’s own survival.

“The competition in fundraising after COVID-19 will be very high, and it would be difficult for small organizations to compete with bigger organizations in terms of experience, networks, technical and institutional capacities,” she said.

“In order to provide immediate support, in partnership with the Spotlight Initiative and the European Union, the UN Trust Fund will allocate an additional USD 9 million to support all of its existing grantees in sub-Saharan Africa.”

Based on the responses from grass-roots women’s organizations around the world, the UN Trust Fund has just released an analysis and a  5-point action plan to immediately support grantees during the crisis.

Related News
24/03/2020
Ending violence against women in the context of COVID-19
11/12/2014
Around the world, women and men of all ages “orange their hoods” to end violence
08/08/2013
International Day of the World's Indigenous Peoples
15/02/2013
Burns Violence Survivors rebuild their lives in Nepal
24/12/2012
Confronting dowry-related violence in India: Women at the center of justice
END_OF_DOCUMENT_TOKEN_TO_BE_REPLACED