Around the world, women and men of all ages “orange their hoods” to end violence

From flash mobs to bicycle races, street marches to art exhibits, and even illuminating landmarks and buildings in orange light, people around the world banded together during the 16 Days of Activism against Gender Violence by “oranging their neighbourhoods.”

Orange made a splash this year to mark the 16 Days of Activism to end violence against women, from 25 November to 10 December. The colour of the Secretary-General’s UNiTE Campaign symbolizes a brighter future for all women and girls – one free of violence. Some snapshots from around the world… 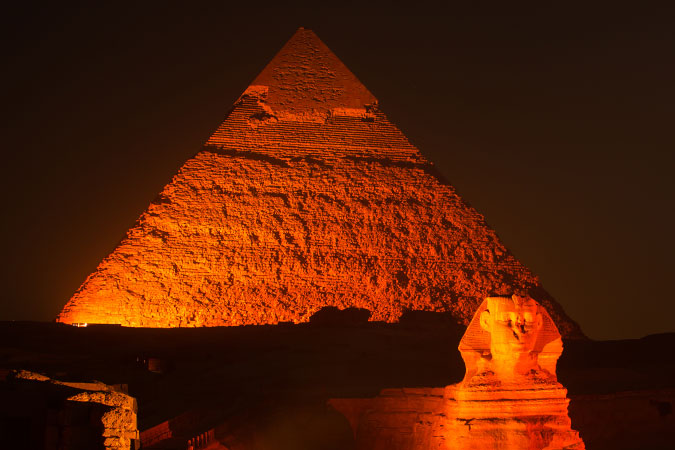 In Egypt, the Sphinx and Pyramids of Giza were lit in orange on 10 December. Photo: UN Women/Mohamed Ezz Aldin

In the Arab States region, activities were planned in eight countries. Among them, in Egypt, historic landmarks of the Sphinx and Pyramids of Giza — one of the Seven Wonders of the World — were set aglow in orange at the end of the 16 Days on 10 December in solidarity with the mobilization to end violence against women and girls.

The 16 days included an important moment for Iraq, where the Ministry of Interior, State Ministry of Women Affairs and UNDP launched the first national database for tracking cases of domestic and gender-based violence in the central and southern part of the country. At an event to mark the 16 Days Campaign, Kuwait held a walkathon, called “Begin by Breaking the Silence”, which was attended by Government officials from the Ministry of Health.

In Jordan, Her Royal Highness Princess Basma bint Talal called on media to better address Article 308 of the Jordanian Penal Code—a focal point of their 16 Days campaign—which currently allows rapists to avoid prosecution if they marry survivors. She also encouraged youth to extend awareness and action beyond the 16 days, at a closing ceremony. 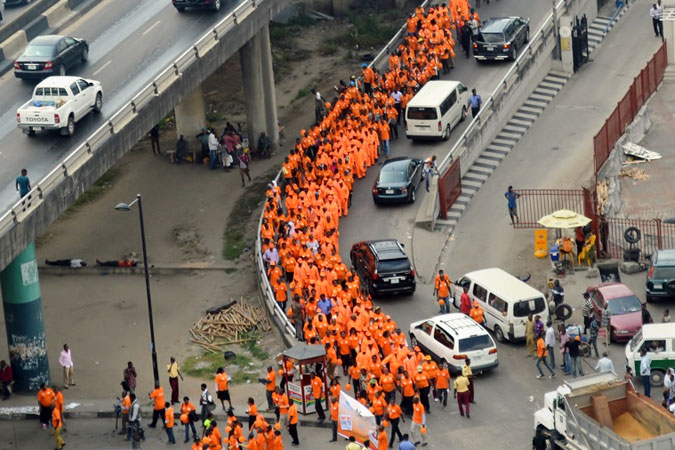 Amid the sound of more songs and drumming, this time in Nigeria, 350 people dressed in bright orange clothing rallied their way through the streets of Lagos, forming a sea of orange as they played instruments and waved banners with anti-violence messages. Meanwhile, orange shirts were scattered among members of the Kazanchise community in Ethiopia, distributed to shop owners, food vendors, shoe shiners and gas station operators as a way to highlight the issue.

Thinking outside the box to address violence, UN Women and the International Telecommunications Union in Cameroon launched the first toll-free calling centre for gender-based violence survivors in Douala during a special Gender Café. The 16 Days campaign event explored the use of Information and Communications Technology as a means of preventing violence against women.

In a more artistic form of awareness-raising, Rwandan musicians performed in a singing competition in Kigali as part of the Kigali Safe City Programme’s Community Mobilization and Public Awareness Strategy. Competitors wrote and performed original songs related to the issue of violence against women to a crowd of more than 3,000 people, including high-level representatives from the national and local government. 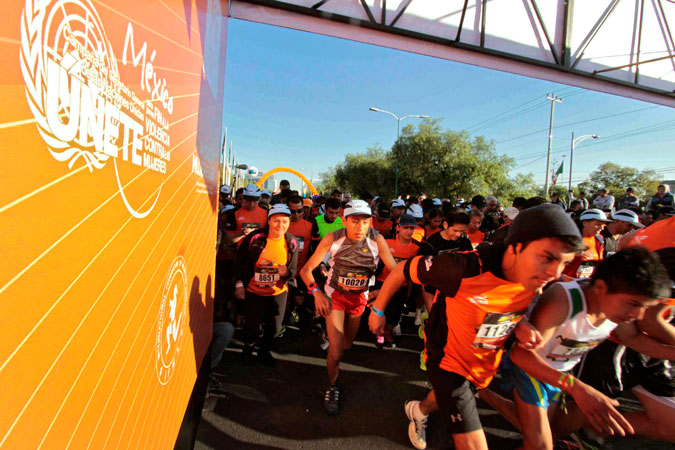 In Latin America and the Caribbean, men and women painted their world orange—in some cases, literally. Youth in Honduras, for example, painted graffiti murals throughout their communities, donning anti-violence messages.

Similar slogans were taken to the streets of Trinidad and Tobago, where men and women donning UNiTE campaign ribbons rallied through the streets, holding “NO” signs inscribed with messages like “No cyber bullying” and “No verbal or sexual abuse.” And more than 12,000 Mexican runners decked in orange picked up the pace at the 14th annual Azteca Race, which highlighted the issue of violence for the first time ever.

Where people weren’t marching or running in the streets, they were engaging in local and national discussions on violence prevention. Haiti hosted a national radio quiz about the 16 Days campaign, while members of Jamaica’s Government and private sector joined the UN Women country team to launch an advocacy campaign around ending sexual violence against girls.

The Administration Building of the Panama Canal, an architectural icon for the region, was lit in orange to commemorate the campaign, as were the Angel of Independence in Mexico City, the Parliament and Presidential Palace of Ecuador, Bolivia’s Parliament and Administration buildings, and the Torre Futura in El Salvador’s capital. 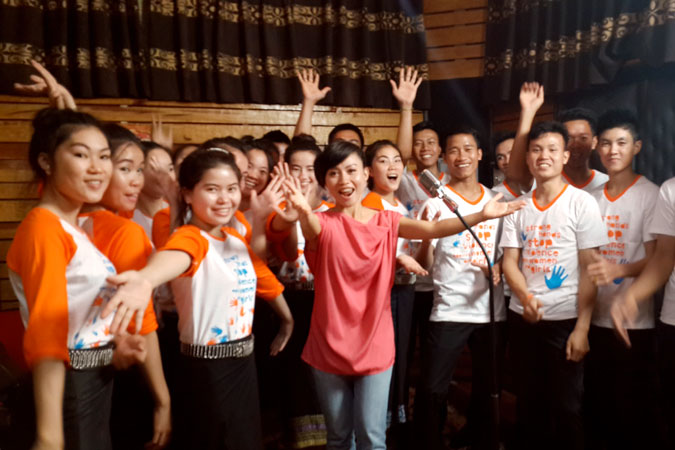 In Laos, musician Aluna and a group of youth from the Arts Education College produced a special song on ending violence against women. Photo: Nicole Hosein

In the Asia-Pacific region, youth emerged as strong supporters of the 16 Days campaign, raising awareness through interactive discussions and the arts. From Cambodia to Thailand, to Viet Nam and Laos, and the Island State of Timor-Leste, thousands of youth took part in dance routines, discussions with TV personalities, university workshops, flash mobs and dramatic performances to address violence. Together with Laotian musician Aluna, a group of youth from the Arts Education College also produced a special song related to ending violence against women.

In other acts of creativity, Chinese artists put their hands to work to produce a visual art exhibit on women’s rights for the Chinese Museum of Women and Children. Meanwhile, nearly 1,000 Thai youth in Bangkok put their feet in action in a mini-marathon to promote respectful relationships. Also in Thailand, 600 representatives from Asia-Pacific Member States, civil society, youth, media and UN agencies signed a pledge to accelerate prevention and response to violence against women and girls.

In order to raise awareness not only at the local level, but among decision-makers as well, Cambodian community leaders such as councillors, school principals and police held discussions about domestic violence awareness training. In Bangladesh, the UN Women Country Office took to social media to raise awareness among the general public, while in Pakistan, men and women signed commitments to stop violence against women. 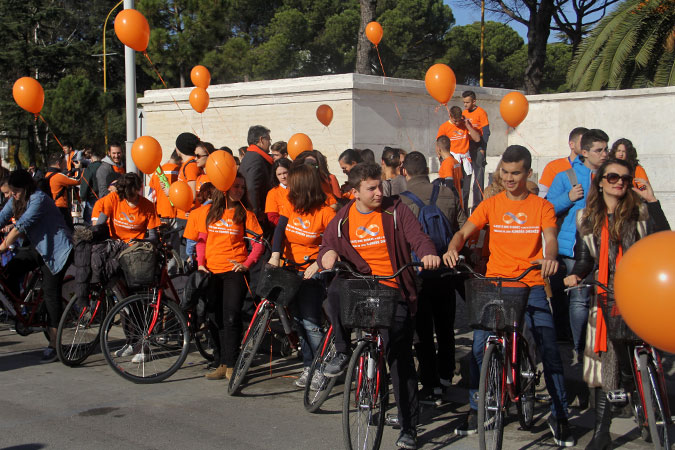 In Europe and Central Asia, children, youth and school communities engaged in both creative and educational activities throughout the 16 Days campaign. With bright orange balloons in hand and blowing in the wind, youth from Tirana, Albania cycled to reach the finish line for violence. Supporters came dressed in orange shirts, scarves, UNiTE campaign pins and waved orange posters denouncing violence.

In Kyrgyzstan, young men were invited to put their boxing gloves on to end violence against women by participating in a boxing tournament called “Strong Men are Against Violence”. A graffiti project was also created over the course of the 16 Days campaign to reflect artists’ positions on women’s rights.

In the Former Yugoslav Republic of Macedonia, where art was also a key means for awareness, theatrical plays, art installations, public debates and discussions with students were organized to address different forms of violence and the laws surrounding them. Meanwhile, school children in Spain took part in “orange” arts and crafts activities, where they cut out orange hands to hold up in the face of violence.

In Norway, the UN Women National Committee launched a challenge to sing against violence against women, creating a social media phenomenon with people from all walks of life, including ministers, CEOs and union leaders singing out against violence and challenging their peers to do the same.

The UN Secretariat building (left) and Empire State Building (right) in New York were lit orange on the evening of 24 November, ahead of the International Day to Eliminate Violence against Women, 25 November. Photos: UN Women/Ryan Brown

At United Nations Headquarters in New York, the iconic Empire State Building and UN Secretariat building were both illuminated in orange ahead of 25 November, the first time the buildings have been lit simultaneously for a cause. Anti-violence messages also flashed across orange screens of the Reuters and NASDAQ Towers in Times Square, where hundreds of thousands of tourists and residents pass each day. In support of orange days, United Colors of Benetton also produced a multimedia campaign that ran across the world through video, print and online advertisements, including in leading publications like the New York Times.

View our Storify on the #16days:

Related News
06/03/2013
Presentation by Michelle Bachelet and Julia Duncan Cassell at a side event on the COMMIT Initiative
06/06/2012
UN Women working towards a sustainable future
26/09/2013
Football unites President of Bolivia, diplomats and top officials to End Violence against Women
28/06/2021
Winners of the comic and cartoon competition, “Generation Equality: Picture It!”
27/05/2020
On the front lines of COVID-19, women’s organizations provide vital services as first responders as violence against women spikes
END_OF_DOCUMENT_TOKEN_TO_BE_REPLACED