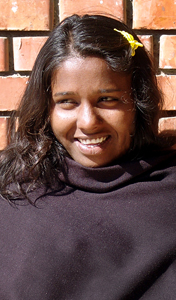 Gudiya was accused of being a witch and burned by her in-laws at the age of 16. Photo: Laetitia Vanderstichelen

With a spark of pride in her eyes, Gudiya speaks with the strength of a survivor who has turned over a new page in her life. “I used to feel that women are only born to serve men, but now I know that we don’t have to be servants. We have a choice.”

Now 19, she describes her past: forced to marry at the age of 14, her life was marked by the verbal and physical abuse of her husband’s family. Shortly after marrying, the family lost a buffalo and when Gudiya later could not conceive a child, her husband’s family started to believe that she was a bad omen.

Gudiya’s husband, who had also been forced into marriage, never cared for her. The abuse culminated one night when Gudiya’s sister-in-law accused her of being a witch and used a burning log to severely burn Gudiya’s body. Despite the indescribable pain that the burns caused and the immediate threat to her life, her husband’s family refused to take her to the hospital until neighbours intervened and threatened to take action.

With inadequate facilities to treat burns patients in the local hospital, Gudiya was referred to the Burns Violence Survivors Nepal (BVSN) organization, which is a partner of the umbrella organization Acid Survivors Trust International(ASTI).

Through a programme supported by Zonta International and the UN Trust Fund to End Violence against Women, ASTI and their partners in Nepal, Uganda and Cambodia are preventing and responding to this horrific form of violence and thus ensuring that victims have access to the integrated essential services they need.

ASTI and its partners like BVSN help provide quality medical and psychosocial care, with a specialized team consisting of counselors, a physiotherapist and nutritionist who provide medical, physiological and nutritional support to burns violence survivors. They also promote legal advocacy, vocational training and long-term prevention strategies. These aim to increase knowledge of acid attacks and burning as a form of violence against women through awareness initiatives, such as community theatre and ongoing research.

In Nepal, as in many other countries, there is a lack of nationwide statistics regarding the prevalence of violence against women, or systematic data on acid and burns violence. However, a recent study conducted by Nepal’s Department of Health Services showed that suicide is the leading cause of death among women aged 15-49 in the country, and that 50 per cent of the suicide cases follow burns violence.[1]

Acid and burns violence has a devastating effect on the human body. It causes severe physical, psychological and social scarring; victims are often left with no legal recourse, limited access to medical or psychological assistance, and condemned to social ostracism. Gudiya for instance did not have the means to pay for her treatment. Without the support of BVSN, she would not have been able to access the treatment, counseling and legal aid she needed.

After surviving the torture and pain, and encouraged by the support received from BVSN, Gudiya promised herself not to return to her husband’s family. With little education, no means of support and the need for protection, she stayed at a women’s shelter, named Saathi, one of the partner organisations working with BVSN. During her time at Saathi, Gudiya learned to read and write and enrolled in vocational training with a dream of building a new life.

While she is constantly reminded of the attack each time she looks at herself in the mirror, she describes how the care received from BVSN has made her heart stronger, ensuring that she moves on and builds a new life for herself in greater freedom.

“The support I received helped me to become the woman I am today and I am really proud of myself,” says Gudiya.

It has now been three years since the night of the attack and Gudiya has a clear plan for her future.

“After going back to my village, I really want to open a tailor shop, so I don’t have to depend on my father or family. At the same time, I will work to make people aware of burns violence and its consequences,” she says. “I feel that I am getting a new life which is totally different from my past.”

To learn more about how the UN Trust Fund and Zonta International are supporting women survivors of acid and burns violence, click here.

To watch a video on the work BVSN is doing in Nepal: https://www.youtube.com/watch?v=0pzcCOHkxDw&feature=plcp

Gudiya from #Nepal was accused of being a #witch & burned by her in-laws at the age of 16. Read her story!owl.li/hQTB4