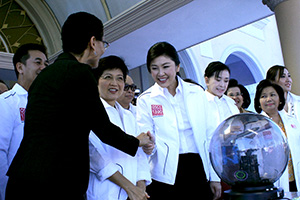 The One Stop Crisis Centre (OSCC) includes a hotline managed by trained staff, a network of 22,000 crisis centres around the country and 1,300 mobile units to access communities nationwide. The crisis centres will receive complaints, transfer cases and coordinate responses between Government agencies.

Despite existing response services, multi-sectoral coordination mechanisms remain a challenge. The mobile units will raise public awareness, and also proactively lead interventions in communities where complaints have been received.

Forty one per cent of ever-partnered women in Bangkok and 47 per cent in rural Nakhonsawan reported having experienced physical or sexual violence by an intimate partner.[i]

The OSCCs will be administered by the Ministry of Social Development and Human Security. They will be fully computerized and able to track specific cases or survivors’ rehabilitation programmes. They will also feature a database that will eventually provide a snapshot of the true extent of violence reporting and the demand for social assistance, while collecting information on the OSCC’s use, to ensure improvements in their responsiveness and effectiveness.

The national initiative will respond to violence by providing immediate social assistance to children, women, elderly and persons with disabilities who confront problems such as human trafficking, gender-based violence, child labour and teenage pregnancy. It will also play a preventive role by raising public awareness and focusing on rehabilitation. 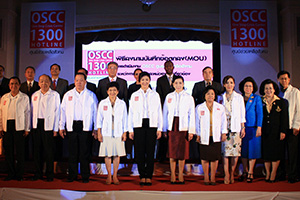 “The Government has put gender equality at the heart of policies and planning,” said Prime Minister Shinawatra, at the launch of the OSCC. “The OSCC is the symbol of our national commitment to make the social support system work for people of all sexes and ages,” she said.

On International Women’s Day this year, Thailand joined UN Women’s newest global initiative “COMMIT” to end violence against women and girls, becoming one of the first countries in Asia-Pacific to set out concrete steps to tackle this pandemic. Thailand committed to reinforce national efforts to protect women’s rights to live free of violence.