“If the dispute is not that serious, if it is just slapping and there is no blood, we just let the family work it out,” says an elderly customary leader, Norberto Tomas, addressing a group of 50 community members gathered for the inauguration of a community space in the village of Maudemo, in the southwestern District of Covalima in rural Timor-Leste. “Sometimes, they might need to talk to the village or hamlet leader to solve the problem.” 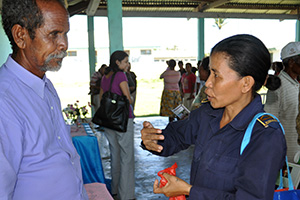 Hearing this, Sergeant Amelia de Jesus Amaral immediately jumps out of her chair holding a copy of the Law against Domestic Violence, and begins reading the clause that would apply to this situation. “Slapping is domestic violence! And domestic violence is not just physical. There is economic, sexual and emotional violence also, and these are public crimes,” she intervenes. “You always need to bring cases like this to the police,” she stresses.

Sergeant de Jesus Amaral is the Commander of the Vulnerable Person’s Unit (VPU) of the National Police of Timor-Leste (PNTL), stationed in Covalima, a seven-hour drive from the capital, Dili. The Unit is usually the first point of contact for survivors, depending on their needs at the time.

Sgt. de Jesus Amaral, 40, wanted to be a police officer since childhood. She worked as an activist in Covalima during the resistance movement throughout the Indonesian occupation (1975-1999). She recalls that women’s organizations active during that time, such as Fokupers, one of UN Women’s local NGO partners, gave her confidence to pursue her dream of being a police officer.

When survivors approach her for help, they don’t approach her because she is a woman, but because of her long-term commitment to supporting survivors as a member of the community referral network and as a police officer.

Maudemo’s proximity to the Indonesian border makes it prone to conflict, as well as human and drug trafficking. The area experienced heavy fighting and conflict during its occupation and struggle for liberation.[1] The region has a high rate of sexual and gender-based violence, which may be attributed in part to women’s geographic isolation.[2] The communities reached by UN Women and NGO partners are generally far away from the police stations, and road access to certain areas becomes impossible during the wet season, usually lasting about five months out of the year.

After documenting a violence report, Sgt. de Jesus Amaral then brings survivors to a referral network in Covalima that guides them through the steps of recovery, both physically and emotionally, as well as supporting them through legal proceedings, should they choose to pursue a case through the justice system.

The network is composed of 35 organizations that work at the community level to provide support to self-help groups, providing training sessions on agriculture and fishing, and opportunities to develop employment-related skills such as English, computer literacy, and continuing education for youth. Through the network, various community spaces in the villages have been established to create physical locations for women’s self-help groups to meet and increase their income-generating activities, and to mediate interpersonal conflicts before they escalate into violence. There are five such spaces in Covalima.

UN Women, together with its national NGO partner the Asia Pacific Support Collective in Timor-Leste (APSCTL), is supporting these women’s self-help groups and has mobilized a group of female and male peace agents, including Sgt. de Jesus Amaral in the two most-western districts in Timor-Leste, Covalima and Bobonaro.

“Before the self-help groups started, we were just staying at home and cooking for our husbands,” said one participant. “Now with the groups, we are working, earning money and know we can do other things.”

At the recent inauguration of one of these spaces in Maudemo, community members spoke about their participation in agricultural events and training on leadership, among other opportunities that resulted from their collaboration as a group. They also had a chance to talk with Sgt. de Jesus Amaral about their own encounters with violence and the law.

“I know of a case where a woman called the police, and they didn’t answer the phone,” remarked a participant. “She called them again and they said they would come and pick her up, but no one ever came.”

Sgt. de Jesus Amaral encouraged the entire community, to call her directly when something like this happens. She has a reputation in the community of being so committed to helping survivors that even though she does not drive a car or a motorbike, she will walk on foot to pick up a survivor if they call her for help.

“If you are being hurt, call me,” she said. “I will come and pick you up and take you to a safe place. I will help you report the police who don’t take your calls to a higher authority. It is our job to take your case seriously and to help you get to the Prosecutor’s Office.”

At the close of the community meeting, Sgt. de Jesus Amaral was surrounded by people asking for her phone number.

“We, as police, are paid by the State to perform these duties,” she said. “I am here to help survivors use the referral network, get medical treatment if they need it, and get counseling to be able to feel better after their trauma. I help them take their cases through the Prosecutor’s Office. This is why I became a police officer.”

To ensure that police officers are aware of their responsibilities and the reach of the 2010 Domestic Violence law, UN Women, along with UN, government and civil society partners have also been supporting awareness-raising of the legislation among the national police and other key actors.

Back in the district capital, Suai, the Coordinator of the Referral Network, Quintino da Costa remarked on the impact of the work of Sgt. de Jesus Amaral and the network since the 2010 passage of national Domestic Violence legislation, saying “everyone knows now that domestic violence is not good. It’s a crime. That’s common knowledge.”

Sgt. de Jesus Amaral added, “I have a list of the 38 perpetrators that have been sentenced and imprisoned. This tracking list is a sign of success for me, that the law is being implemented.”

[1]Secretary-General Report to the Security Council on the UN Integrated Mission in Timor-Leste (UNMIT), Office of the Police Commissioner, 2012.
[2]Quantitative data collected by the Timor-Leste Demographic Health Survey 2009-2010, revealed that 57.4 per cent of women in Covalima between 15 and 49 years of age report having experienced physical violence. See also APSCTL. 2009. Baseline Study on Sexual and Gender-Based Violence in Bobonaro and Covalima.
Related News
10/04/2013
Thailand launches One-Stop Crisis Centre to respond to violence against women
04/04/2013
Femicide in Latin America
27/02/2013
Better services for survivors of domestic violence in Kosovan municipalities
15/02/2013
Burns Violence Survivors rebuild their lives in Nepal
20/11/2014
In Palestine, specialized prosecutors ensure women survivors’ access to justice
END_OF_DOCUMENT_TOKEN_TO_BE_REPLACED