UN Women is working with the Attorney General’s Office in Palestine on a human-rights-based approach to handling cases of domestic and gender-based violence, by training public prosecutors in line with international standards and supporting the development of special operating procedures. 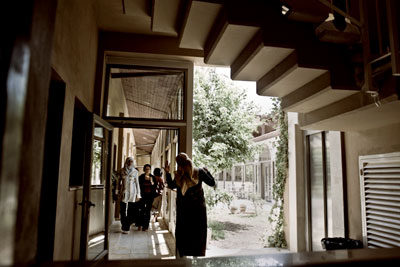 A scene from daily life at the Mehwar Centre for survivors of violence in Palestine. Photo: UN Women/Ventura Formicone

When Zahara* divorced her second husband her family locked her in an abandoned house for more than four years before police, acting on anonymous information, found and freed her.

“The [Palestinian Civil Police Family Protection Unit] advised me to press charges against my family, but I did not want to increase shame. My brother signed a pledge not to harm me. I trusted them and thought the situation would change. It did not.”

Zahara’s story is not unique. A 2011 survey of the Palestinian Central Bureau of Statistics revealed that one-third of women experiencing violence remain silent or seek help from family. Few turn to specialized institutions, and even less to security and justice services.

“All the people of the village blamed me for putting shame on my family after the police intervened. They never questioned my treatment by the family,” remembered Zahara.

A societal culture of shame, the patriarchal nature of Palestinian society, and pressure from family and the community in cases of gender-based violence, make it difficult for women to reveal their plight. Inadequate laws, lack of protection services, and low confidence in justice and security institutions further hamper opportunities for women to seek redress.1 As a result, most violence cases are not reported and never enter the justice system.

“Professional knowledge and expertise in dealing specifically with cases of women and girls victims of violence is needed,” says Dareen Salheyeh, Chief Prosecutor. “Dealing with these cases requires sensitivity to the issue, including awareness and willingness.”

From January to March 2014, Dareen was one of 20 prosecutors who attended UN Women workshops for public prosecutors on handling cases of gender-based violence. The workshops focused specifically on the use and application of laws, including international women’s rights conventions, for the benefit of women and girl survivors of violence. It is one of several activities targeted for justice and security professionals under a three-year UN Women-executed project funded by the UK Department for International Development. The project aims to train and establish specialized core groups of justice and security professionals for equitable access to justice for women survivors of violence.

Following a set of workshops and assessment roundtables, in April the Attorney General’s Office established the first-ever pool of 15 specialized prosecutors to handle cases of domestic violence across the West Bank. Participants in the training were nominated as specialized prosecutors and later on she was named gender focal point for the Attorney General’s Office.

“The specialized prosecutors are based in each district and are the only competent authority to deal with cases of violence against women and girls. The specialization guarantees speed in procedures, professionalism, and decision-making processes,” says Dareen, “which responds to a number of impediments to women’s access to justice and reinforces confidence.”

Prosecutors’ reports are considered the most important pieces of evidence by judges so the way prosecutors consider a case has an impact on the outcome of the judicial process for women survivors of violence.

In Palestine, many laws are outdated or do not address current issues around domestic violence, but the Palestinian Legislative Council has been paralyzed since 2007 following the general elections and the ensuing factional split between Fatah and Hamas, so changes haven’t been possible.

“If we apply the law literally and insert our own personal beliefs, society will not change,” says Dareen. “The workshops and various meetings we attended gave us the tools to apply the spirit of the law in treating these cases to protect the victim and hold perpetrators accountable.”

The nomination of specialized prosecutors opens concrete opportunities to fulfil the human right of access to justice for girls and women survivors of violence. For Dareen, the current development of Standard Operating Procedures, under the UN Women Access to Justice project, will enhance the ability of the public prosecutors to adequately address cases of violence against women and girls and enhance coordination with other institutions, sectors and service providers.

“Women withhold a lot of information by not understanding their rights and obligations and the procedures,” explains Dareen. “We’ve started mapping organizations providing psychosocial and legal support to women for referrals. These institutions can convince the woman to talk, support her through different procedures, such as forensic examination, and their reports can be used as evidence in courts.”

These institutions also provide crucial support after the investigation, to heal trauma and stigma and reintegrate survivors. For Zahara, the Mehwar Centre supported her to rebuild her life, notably through training, helping her find a job, and liaising with family and community to reintegrate her into society.

“Without being sheltered at Mehwar and the support of its staff, I would have never been able to go through the process of getting back on my feet to demand my rights,” says Zahara. “Having gender-sensitive justice, security and social services is crucial for women survivors to demand their rights.”

[1] UN Women research (of 2013 press coverage) on Palestinian women’s access to justice in the West Bank revealed that justice service providers lack professional knowledge and expertise in dealing with female survivors of violence.

For more information on UN Women's efforts to end violence against women, check out our In Focus package for 25 November, the International Day for the Elimination of Violence against Women.