In Palestine, a Centre offers shelter and changes lives for survivors of violence 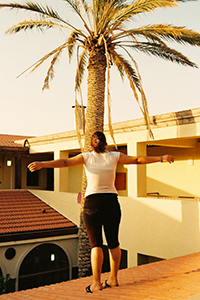 “Freedom when I can’t fly” by Rima Issa

Coming from a village close to Hebron, Mayy* was 19 years old when her family threatened to kill her. She needed protection and arrived at the Mehwar Centre for the Protection and Empowerment of Women and Families.

Mayy was one of the early arrivals. She was the second woman sheltered at the Mehwar Centre, which opened in Bethlehem in 2007. Her transformation from a survivor of violence to that of a self-confident, educated woman was shaped in many ways by her time at the Centre.

Established with the support of UN Women, with funding from the Government of Italy, it is the first national and multi-purpose centre in the Occupied Palestinian Territory, combining prevention, protection, empowerment, and community-awareness activities, while offering social, psychological, and legal counselling services, in addition to being a shelter for women and their children.

It took more than a year for Mayy to open up to the Mehwar team. Women subjected to sexual abuse within the family at a very young age suffer deep emotional and relational damage. One of the most difficult things for them is to rebuild a sense of self-worth. They put up protective borders in social and affective relationships, to prevent themselves from being re-victimized.

For Mayy, the staff’s persistent support finally helped her to open up and reveal her horrifying story of abuse and violence perpetrated first within her family, and then within the community.

The Mehwar Centre offers a space where women victims of violence can feel safe and access services needed to deal with their trauma.

“The centre offers activities that enhance the women’s awareness about their legal rights, and about social and health issues,” explains Maysoon Ramadan, director of the Mehwar Centre.

“It helps them increase their skills and knowledge about resources available, which is something they lack prior to entering. Rehabilitation and vocational courses are also implemented to assist the women in acquiring skills to be fit for new job opportunities after leaving the centre.”

The road to rehabilitation and empowerment is a long one, and for many like Mayy, studying was not an easy option. At first, Mayy did not want to study, lacking concentration and discipline. Her psychological and emotional balance was precarious.

But slowly she was persuaded to attend a one-year course for medical secretaries. But unsure whether she would be able to find a job with her current qualification and in need of financial security, she started working in a shop to earn some money.

Even when she left the shelter, the Mehwar team continued to work with her. Focusing on her protection and reintegration within her community and family, they began a long and hard negotiation and a careful rapprochement which finally convinced Mayy’s father that the best thing for his daughter and for the family’s credibility was to give Mayy a chance to get an education and a qualified job.

He agreed to let Mayy enroll in a nursing course in the Caritas Baby Hospital in Bethlehem while living at a students’ house under the supervision of the Mehwar team.

Throughout her two years of studies, the Mehwar team continued to offer Mayy not only psycho-social support and a safe place to go to any time she needed, but they also helped her financially by paying her tuition fees and supporting her boarding fees at the students’ house. Finally, Mayy graduated as a nurse.

On her graduation day, Mayy smiled with tears brimming in her eyes, as stated proudly, “Now it is time for me to go to University”. Her journey had just begun.

*The name of the woman mentioned in this story has been changed in order to protect her identity.

“I feel through my eyes”: Mehwar Centre in the Occupied Palestinian Territory

The photos in this video were taken by the women of Mehwar Centre (which opened in Bethlehem in 2007 with support from UN Women and funding from Italy’s Government) during a month-long photography workshop and were exhibited at an event on 24 July 2012.