The One Stop Centre that was recently set up in Ramallah as part of a joint UN Women, UNDP and UNICEF programme, is one of a kind. The 24-hour facility provides various services that survivors of violence need—medical, legal aid, temporary shelter and police protection—all under one roof. Since April 2017, it has already served more than 400 women and juvenile survivors.

“I was seven months pregnant when I ran away from my husband’s extreme violence and arrived at the Family Protection Unit in Ramallah,” said Sana Ali*, a 23-year-old woman who recently visited Palestine’s first One Stop Centre for survivors of violence, with her two-and-a-half-year-old son. Ali had given birth to her son at a women’s shelter in Bethlehem at the time, established with the support of UN Women (then UNIFEM). She had stayed at the shelter for a year before going to live with her family. 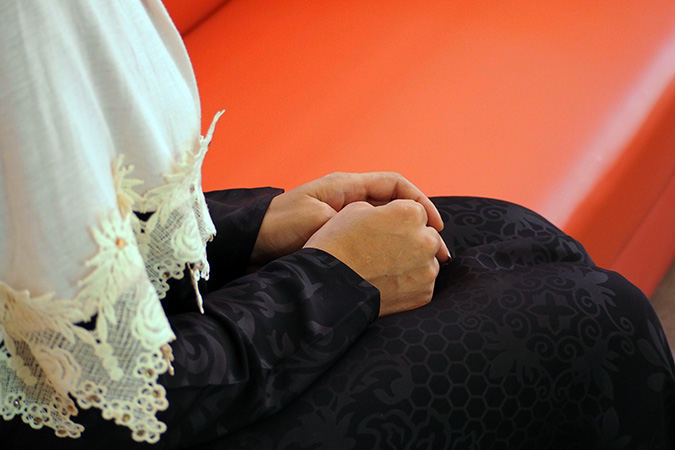 Sana Ali, a survivor of violence plans on receiving psychosocial support from the One Stop Centre. Photo: UN Women/Eunjin Jeong

The opening of the One Stop Centre in Ramallah in April 2017 was good news for Ali, who needed continuous psychosocial support to recover from the trauma of violence. “The One Stop Centre is different from other facilities,” Sana shared her first impression of the centre. “It has all the necessary services in one place, and you don’t have to worry about going to other places and risk your privacy. It even has a place for my son to play while waiting for me,” she said, smiling.

Located in Ramallah, the central town of West Bank, the One Stop Centre sits in the same building as the Family and Juvenile Protection Unit (FJPU) of the Palestinian Civil Police. Open to public 24 hours and all year round, it provides comprehensive in-house services to women and juvenile survivors of gender-based violence, such as medical examination, legal consultation, psychosocial support, referral service to long-term shelters, and police protection for at risk women. 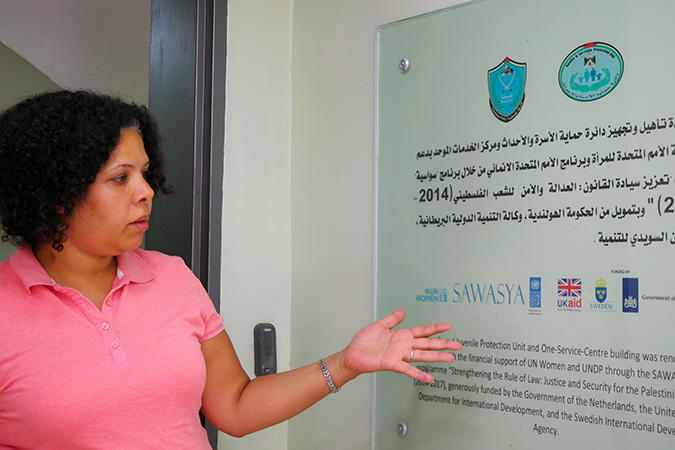 UN Women staff Bisan Mousa explains how Sawasya programme has been supporting the Government of Palestine to build its own capacity to support survivors of violence. Photo: UN Women/Eunjin Jeong

“Sana Ali’s case is a good example of how a survivor of violence can have a positive experience of external support and continued rehabilitation, and build trust over time,” said Bisan Mousa, Women’s Security Programme Analysist for the UN Women Office in Palestine. Building on its long-term partnership with the Government of Palestine in combating violence against women and girls, UN Women has provided a series of capacity building trainings to the staff of the Family and Juvenile Protection Unit to strengthen their understanding of the different needs that survivors of violence have, and how to best meet those needs. The One Stop Centre was founded following gender-sensitive guidelines and contains female receptionists, a second entrance away from main road to ensure privacy, a short-term shelter which can accommodate two women at once, and a children’s play room. UN Women led the designing of the centre from the initial planning period, in coordination with UNICEF.

“Many Palestinian women suffer from violence by their spouses and when they try to seek help from their family, the attempts are often rejected by the family due to traditional values. The One Stop Centre is open to all Palestinians, especially women and juveniles who suffer from any kind of violence,” said Major Abla Fazaa, the Head of the Family and Juvenile Protection Unit in Ramallah, who is also heading the One Stop Centre. “By placing all necessary services in one place, we guarantee that their privacy is protected, and that they are not being victimized again by retelling their stories over and over again,” she explained. 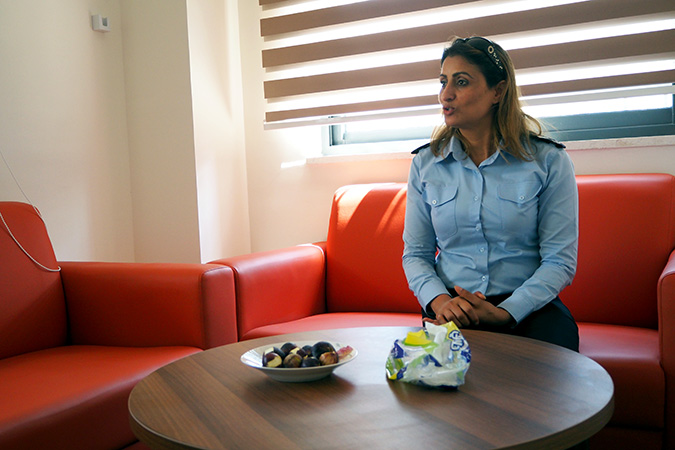 Major Abla Fazaa, the Head of the Family and Juvenile in Ramallah who is also heading the One Stop Centre, explains the challenges that Palestinian women survivors of violence experience and how the One Stop Centre is supporting them. Photo: UN Women/Eunjin Jeong

Within a few months since it opened, the One Stop Centre has served over 400 women and juvenile survivors of violence. Survivors who visited the centre unanimously responded that they felt safe, protected and empowered: “The moment I entered the centre, I knew I was safe,” said Maya Saeed*, a 25-year-old woman who frequently comes to the centre. With the legal support she received at the centre, she recently filed a complaint against her abusive husband. “I feel empowered as I can show him that I have police and lawyer backing me up, and also a place to stay,” she continued. “I have many friends who are in the same situation as me…now that I know there is a place you can trust, I will encourage my friends not to stay silent and come here and get help.”

The One Stop Centre is supported by a programme titled, “Promoting the rule of law in the occupied Palestine territory”—or Sawasya, as it’s locally called—implemented jointly by UN Women, UNDP and UNICEF, and generously funded by the Government of Netherlands, the Swedish International Development Agency (SIDA), the United Kingdom Department for International Development (DFID) and the European Union (EU).

*Note: Names have been changed to protect the privacy of the survivors.

Related News
15/11/2018
From where I stand: “I went back to university to pursue my degree in Gender Studies; I am the only male student in the class”
29/08/2017
Coverage: UN Secretary-General visits One Stop Centre in Palestine to meet survivors of violence
20/11/2014
In Palestine, specialized prosecutors ensure women survivors’ access to justice
13/11/2021
In the words of Mariam: “Once I had a lawyer with me, everything changed.”
16/11/2018
In Lebanon, healing the wounds of violence through theatre
END_OF_DOCUMENT_TOKEN_TO_BE_REPLACED