“I know my father is proud of me” says Devotha Christopher, smiling as she recalls her father at work in the courtroom. “He was not an educated man, but he taught me from a young age that justice will only prevail when the Court understands the barriers people face in their everyday pursuit of rights.” 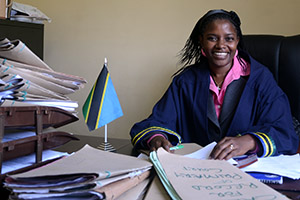 Devotha Christopher promotes gender-responsive court proceedings in her work as a magistrate at the District Court in Arusha. Photo credit: UN Women/Felix Eldridge

In Tanzania, where the formal justice system exists alongside customary and religious law, Devotha’s father was a “court assessor”, interpreting customary laws where they conflicted with the Constitution, the country’s guiding legal document. He died when Devotha was only 13 years old. Now 35, she is a Magistrate at the District Court in Arusha, a city in northern Tanzania. She is also a passionate activist, committed to expanding women’s access to justice through the Tanzania Women Judges Association (TAWJA).

Supported by UN Women, TAWJA provides training for the judiciary on women’s rights and works with female District and High Court judges to address women’s access to justice. Their Jurisprudence of Equality Programme trains judicial officers, policymakers and lawmakers on the application of international women’s rights instruments such as the Convention on the Elimination of All Forms of Discrimination against Women. Efforts include the documentation of court cases in Court Manuals and Law Journals which have supported judges in applying international women’s rights and human rights standards in their judgments.

“Before I attended the training, I did not understand why it was so difficult to find witnesses in cases relating to Violence against Women, for instance,” says Charles Magesa, one of the male magistrates in Arusha who participated in the training last year. “The training has taught me that survivors of violence and their witnesses were often afraid to come forward, because their names used to be publicly announced before the case appeared in Court and they would often be pressured or even threatened into dropping the case. Now I tell the Prosecutor to keep the witnesses’ names hidden from the outside world, including from the accused.”

To promote women’s access to justice, TAWJA’s High Court judges have also been training their peers to address violence against women and combat sexual coercion or “sextortion” cases, with UN Women’s support. 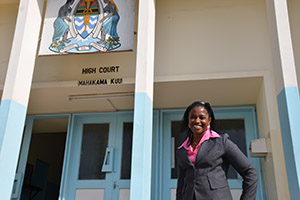 Devotha Christopher is a District Court Magistrate who was trained at a TAWJA workshop at the country’s High Court. Photo credit: UN Women/Laura Beke

Devotha was trained by TAWJA and is now a trainer herself. She says that knowledge has influenced how she handles cases where women’s social or economic rights have been violated. “I am very proud of one judgment in particular — the case of Maria Vanda,” she recalls. In 1970, at the age of just 15, Maria married her husband Peter in a local church, not knowing that their marriage certificate, and thus their wedding, was never legalized. The newlyweds began running a successful business, had two children, and saved enough money to build two houses. One day, Peter moved Maria and the children into a new house he said he had built for the family in a rural village near their home in Arusha.

Three months later, events took a devastating turn when, in Peter’s absence, the true owner of the house knocked on the door and promptly evicted the mother and her children. When they returned to Arusha, Maria found herself locked out of the family home. Not only had Peter deceived her, he now denied ever being married, and refused permission to Maria and her children to the house they had built together.

Destitute and homeless, Maria turned to the court system to seek justice. However, without a legally validated marriage certificate, the Court sided with Peter, ruling that Maria had never been his lawful wife and thus had no claim to her home. Undeterred, she appealed, at which point the case was brought before Devotha.

Trained by TAWJA to identify the barriers that prevent women from accessing justice, the young magistrate sought out the priest who originally married the couple, who confirmed for the court that the marriage had taken place. Despite years of delaying tactics from Peter and his lawyers, including an extraordinary attempt to claim that Peter was in fact someone else, Devotha finally established the truth. The two had been married under religious law; the defective certificate could not invalidate their union; and Maria was entitled to a share of their matrimonial property.

After a legal fight lasting over a decade, however, victory was bittersweet. During the District Court hearing, Maria’s own son had turned against her, denouncing publicly the woman who raised him single-handedly. Two months after being granted what had been lawfully hers all along, Maria fell ill and subsequently passed away. 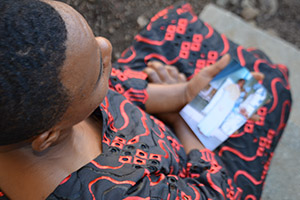 Pasqualina looks at a photo of her deceased sister, Maria Vanda, who died after a prolonged legal battle. Photo credit: UN Women/Laura Beke

As her younger sister Pasqualina recounts, the years of injustice, cultural pressures and emotional strain had taken their toll. “She felt abandoned by her loved ones and winning the case could not mend that loss. My sister died of a broken heart.”

While sad that Maria did not live long enough to benefit from the hard-fought justice, Devotha says “I’m proud that after so many years, this woman finally did see justice done. Against all odds, she stood up for herself. Maria’s case has become an inspiration for women throughout the country who struggle for their rights under the law.”

UN Women also supports TAWJA in awareness-raising efforts with a view to demystifying the court process and facilitating access. This includes disseminating information targeted at Tanzanian women, providing key details on the Law of Marriage, domestic violence, inheritance, creating a will, litigation matters and also how to file complaints against Judges and Magistrates, when needed. Information brochures assist widows, widowers, orphans and other marginalized groups to know, how, when and where to file their cases and how the law protects them.

Anna Collins-Falk, UN Women’s Tanzania Country Representative, says “we are proud to partner with TAWJA in this innovative and important work. From within the judiciary itself, we are able to address some of the most fundamental barriers that women, especially poor and marginalized women face in negotiating the justice system and accessing their rights. Great progress has already been made in addressing discrimination and bias within the justice system and improving access to information for the public.”

Inspired by her father’s work in helping ordinary people access justice, Devotha continues to promote gender-sensitive court proceedings and is grateful for the skills she has gained.

“TAWJA’s work, with UN Women’s support, changes the way we think. To ensure the law is fair and just, we find precedents. And sometimes, we make them.”

Opening Remarks by John Hendra at the Side Event: “Ending Abuse of Authority for Purposes of Sexual Exploitation (Sextortion): The Experience of the Judiciary in Tanzania” (12 March 2013)