Over 900 government representatives of UN Member States, experts, academics, and members of international, civil society and private sector organizations from more than 100 countries gathered in Dushanbe, Tajikistan, from 9-10 June to review the Implementation of the International Decade for Action “Water For Life” (2005-2015), a global initiative for international cooperation in water management launched by the Government of Tajikistan 10 years ago.

In opening remarks to the High-Level Conference, the President of the Republic of Tajikistan Emomali Rahmon said future water scarcity requires more consolidated efforts and both urgent and long-term measures.

UN Secretary-General Ban Ki-moon stressed that safe drinking water and sanitation is a human right and to which all people must have equal access. In his opening remarks, he said “the burden of gathering drinking water falls largely on women and girls ... [and] inadequate sanitation facilities also affect the education and economic productivity of women and girls, not to mention their dignity and personal safety.”

“One vital connection is women’s empowerment,” he continued. “Inadequate water supply and sanitation cost economies USD 260 billion worldwide every year. And just 10 years from now, 1.8 billion people will live in areas with absolute water scarcity. … It is little wonder that many global experts have called the ‘water crisis’ one of the greatest global risks that we face.” 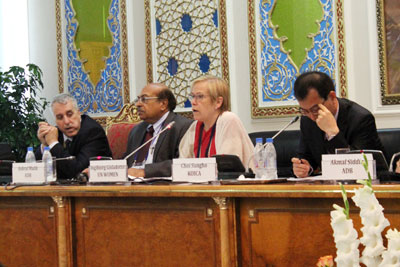 Ingibjorg Gisladottir, UN Women Regional Director for Europe and Central Asia, called on delegates at the conference to take practical action to involve women and men equally in the management of water and sanitation and access-related questions. With regard to financing for development in the water sector, she urged “decisions on public spending and priority-setting to be participatory and inclusive with adequate space and resources for women’s organizations to participate and influence outcomes.”

Ms. Gisladottir also referred to the recently concluded Beijing+20 global review and the UN Women World Survey on the Role of Women in Development in her speech to address the key role of women in framing a sustainable agenda for water and sanitation issues.

A Women Water Forum, organized by UN Women with partners and held as a pre-conference event on 8 June, gave civil society organizations and key stakeholders an opportunity to discuss and highlight women’s specific and key role in water management.

“Access to and use of water is a key issue which we address when supporting rural women to realize joint economic initiatives to improve the livelihoods of their families,” said forum participant Muyasara Bobokhanova, Head of the Association Women and Society, a UN Women partner in Tajikistan. 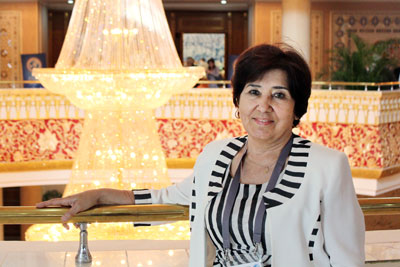 Conference participant Muyasara Bobokhanova, Head of the local NGO Association Women and Society (Tajikistan), will report back to the many women she works with at a grass-roots level. Photo: UN Women.

The outcome document adopted at the Women Water Forum preceding the international conference proposes the establishment of a Women for Water Fund as a flexible co-financing mechanism, an International Women for Water Year (2017) and a UN Women for Water Day (2017) as concrete measures to express political commitment. The year 2017 coincides with the 25th anniversary of the Dublin Statement on Water and Sustainable Development whose third principle (out of four) acknowledges the central part that women play in the provision, management and safeguarding of water.

The conclusions of the conference will directly feed into the post-2015 agenda to be cemented at an upcoming High-Level United Nations Summit in September.

Stay tuned for the outcome document on the official website of the High-Level International Conference “Water for Life” or check out UN Women’s regional Facebook page.

Related News
02/01/2018
In the words of Marai Larasi: “If we are to end violence against women and girls, we need to create seismic shifts across our social norms.”
14/11/2017
Standing up for survivors in the Shari’a court every day: Ayah al-Wakil is determined to leave no woman behind
26/10/2016
In Albania, football and a mobile app get men to commit to gender equality
30/06/2016
“Gender mainstreaming is no longer an option, it is an imperative” — Lakshmi Puri
31/05/2016
Photo contest in Moldova explores perceptions of gender equality
END_OF_DOCUMENT_TOKEN_TO_BE_REPLACED