Towards a global compact on migration that works for migrant women 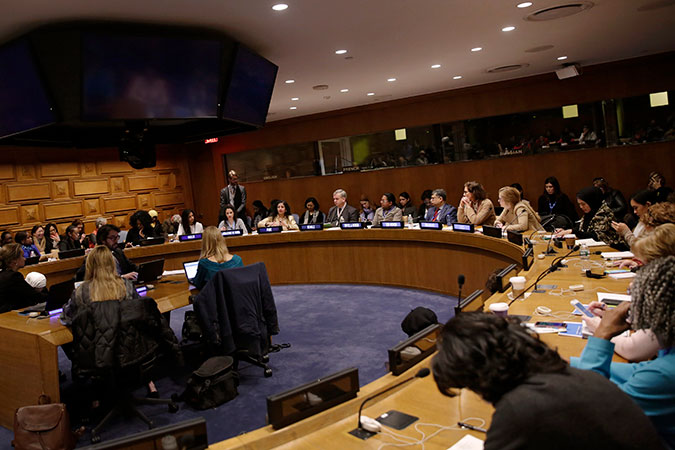 ‘Integrating a gender perspective in the global compact for safe, orderly and regular migration’ event at the 61st session of the Commission on the Status of Women (CSW61). Photo: UN Women/Ryan Brown

At the event, ‘Integrating a gender perspective in the global compact for safe, orderly and regular migration’ at the 61st session of the Commission on the Status of Women (CSW61), UN Women, in partnership with the governments of Bangladesh and Germany, presented a set of expert recommendations that specifically address women’s human rights in the forthcoming global compact for migration. The recommendations are drawn from a joint programme by the European Union (EU) and UN Women, ‘Promoting and Protecting Women Migrant Women Migrant Workers’ Labour and Human Rights’, and incorporates the experiences and voices of a full range of stakeholders involved in migration and its governance, including migrant women.

“These recommendations cover all aspects and all stages of migration, not only in origin and destination countries, but also during transit—a stage during which women are often highly vulnerable to exploitation and gender-based violence, often in the hands of traffickers,” said Lakshmi Puri, UN Assistant Secretary-General and Deputy Executive Director, UN Women speaking during a side event during CSW 61. “This comprehensive list of recommendations serves as a “one-stop shop” for gender-specific considerations in the formulation of human rights-based migration governance, highlighting specific areas that need to be strengthened in order to protect women migrants and recognize their agency throughout the migration journey and process,” she added. 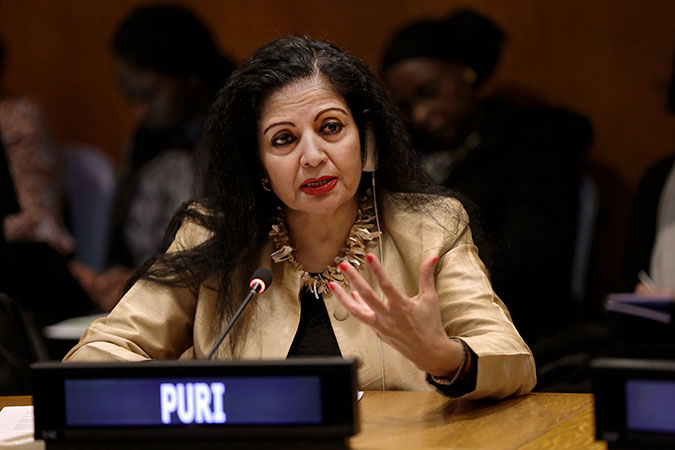 Today 3.3 per cent of the world’s population is living outside their country of birth [1]. People are migrating to escape poverty, improve their livelihood and opportunities, or to escape conflict and devastation in their own countries. Women represent almost half of the 244 million migrants worldwide [2]. Yet, until recently, migrants have been viewed as a homogenous group, without considering their diverse experience and needs, based on their gender, sexual identity, disability and race. When policies are blind to gender, they make the experience of migration less empowering, or place women and girls at a heightened risk of labour and human rights violations.

For example, women from Asia have often shared experiences of being prevented from participating in government-managed migration programmes because they were pregnant or nursing. These restrictions, although implemented by governments with the aim to protect women and their families, has led to women migrating irregularly–often with the use of smugglers— putting them at a much greater risk of exploitation and gender-based violence. In 2014, approximately half of all victims of trafficking assisted by the International Organization for Migrants (IOM) were women and the majority of these had been trafficked for the purpose of forced labour, including domestic servitude and sexual exploitation. 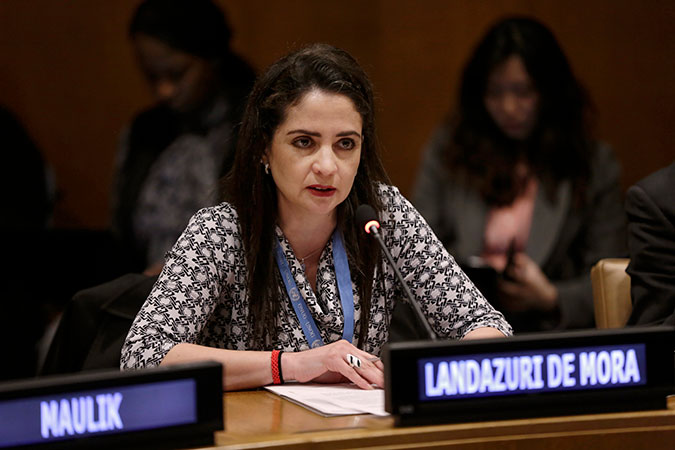 María Landázuri De Mora, of the Committee on the Protection of the Rights of All Migrant Workers and Members of their Families speaks at the event ‘Integrating a gender perspective in the global compact for safe, orderly and regular migration’. Photo: UN Women/Ryan Brown

“The lack of reasonable mechanisms for regular migration leads people to sacrifice their dignity, safety and even their lives to get to their destination,” said María Landázuri de Mora, Member of the Committee for Migrant Workers, speaking at the event. “The global compact should therefore take appropriate measures to address the extreme vulnerability of undocumented migrant workers, especially women and children,” she added.

The global compact referred by de Mora is set to be the first blueprint for international migration governance. On 19 September 2016, 193 governments from around the world unanimously adopted the New York Declaration for Refugees and Migrants and agreed to develop a global compact for safe, orderly and regular migration. It will be developed through intergovernmental negotiations over the course of next year, and adopted at a conference in 2018. The global compact will set out a range of agreed commitments and understandings to enhance coordination between countries in managing large numbers of migrants.

The UN Women – EU programme, piloted in Mexico, Moldova and the Philippines, not only empowered migrant women’s organizations to effectively advocate for their rights, but also supported the formal organizing of migrant women. In Moldova, the first women migrant workers’ organization was created, Mișcarea Femeilor Migrante din Moldovaan, which already supports around 60 women migrant workers. It has also boosted engagement with key international treaty bodies (including the Committee on the Elimination of all Discrimination against Women and the Committee on Migrant Workers) and national governments to strengthen their capacity and increase their accountability to the rights of women migrant workers.

Also speaking at the CSW event, Carolina Gottardo from the Women in Migration Network (WIMN) stated: “The experiences of women in migration (in countries of origin, transit and destination) have informed the development of these recommendations, and have helped to ensure they are a useful tool for promoting their rights and a platform for advocacy. The rights, needs and most importantly, voices of women in migration must be at the centre of the global compact, and these recommendations offer an important platform for making that happen.”

As the intergovernmental negotiations towards the global compact for migration gathers momentum, UN Women and partners will continue to advocate for an agreement that is not only gender-responsive—which means considering the specific needs and vulnerabilities of both women and men—but also human rights-based.

[2] UN General Assembly (2016). In safety and dignity: addressing large movements of refugees and migrants, Report of the Secretary-General.

Related News
24/03/2016
“2030 Agenda will be crucial for the economic empowerment of all migrants” — Lakshmi Puri
15/12/2021
UN Women statement for International Migrants Day, 18 December 2021
15/11/2021
How women migrants in Thailand are stopping trafficking and gender-based violence in their communities
07/10/2021
From where I stand: Learning sessions gave me the courage to aim for a career as a police officer and end illegal behaviour against women
17/12/2020
UN Women statement, International Migrants Day 2020
END_OF_DOCUMENT_TOKEN_TO_BE_REPLACED