From where I stand: Edna Valdez 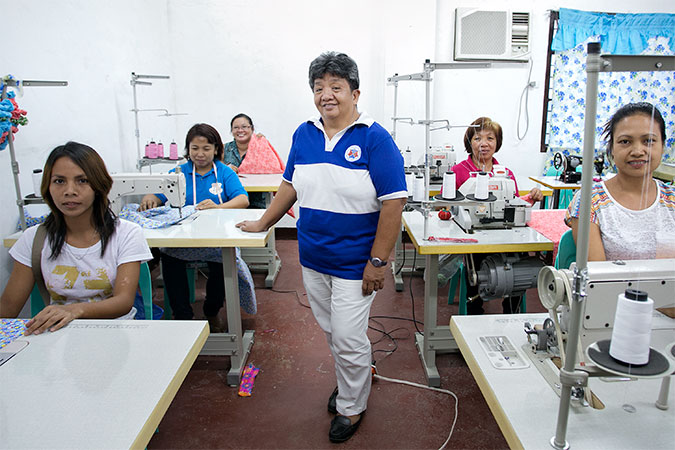 I went to Hong Kong as a domestic worker in 1996. I worked longer hours than my contract stipulated, I couldn’t take time off. When I complained, my employer said I could only get those benefits after two years. Into my third year of contract, when I could finally get benefits, they fired me because, they said, their child was becoming too close to me.

The main challenge for women migrant workers is that they don’t know what rights they have. Even when there are laws and services in place, they don’t know how to claim their rights or access support. That’s why we continuously lobby the local government to set up Migrant Desks at each municipal office, in compliance with the national law, where migrants and their families can access information and support.

As part of Bannuar, I helped a woman who was promised a job as a domestic worker in Hong Kong. When she reached Hong Kong, she was stripped off her clothes and put inside a cargo box—like a chicken in a box with air holes—and trafficked to Lebanon for sex. Somehow, she managed to escape and the Embassy facilitated her return. She received counseling and livelihood trainings from Bannuar and was able to rebuild her life.

Women need correct information about their rights and the risks, before they migrate. The returnees, especially those who have been abused, need re-integration support to pick up the pieces, not only economic opportunities.”

Edna Valdez, 58, was elected as the President of Bannuar Ti La Union, an organization that works for migrant women’s rights in the La Union province of Philippines, shortly after she joined as a member in 2000. Bannuar works closely with UN Women’s partner, Center for Migrant Advocacy (CMA), as part of a European Union-funded migration project, active in Philippines, Mexico and Moldova. Ms. Valdez works at the Bannuar office at San Fernando City La Union, answering walk-in queries from migrant women and their families and referring them to relevant government agencies for support and services. She also conducts trainings about migrant workers’ rights, risks of illegal recruitment and trafficking, and access to services. Her work contributes towards Sustainable Development Goal 8, which promotes productive employment and decent work for all, and its target on protecting labour rights and promoting safe and secure working environments for all workers, in particular, women migrant workers.

Related News
06/03/2019
Migrant workers lacking work benefits learn how to save in the Philippines
19/04/2022
Interview: Taking a survivor-centred approach to protecting women migrant workers in South East Asia
15/11/2021
How women migrants in Thailand are stopping trafficking and gender-based violence in their communities
01/07/2019
Empowering South Asian women migrant workers through improved contracts
26/02/2018
From where I stand: “I kept the courage and managed to escape”
END_OF_DOCUMENT_TOKEN_TO_BE_REPLACED