From where I stand: “I kept the courage and managed to escape”

Saleema Rahman is an advocate for the rights and safe migration of women domestic workers from India. Her journey as a women’s rights advocate began after she came back from Saudi Arabia, having overcome many hardships as a domestic worker herself. 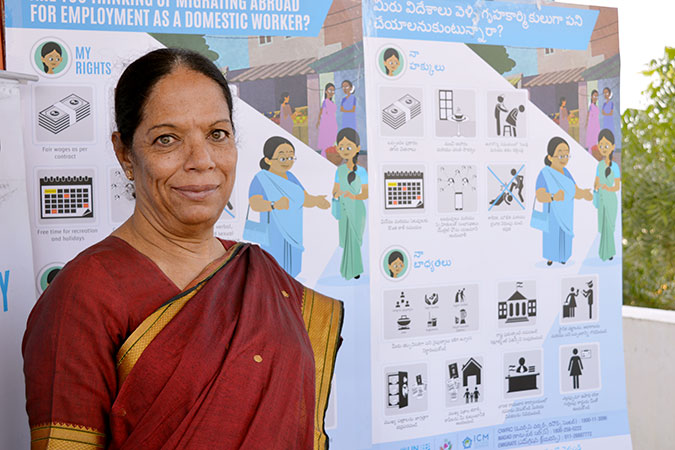 After the death of my husband, I went to Saudi Arabia to work as a tailor. But once I completed that job, my employer sold me to another person. They wanted me to do housework, which I refused. So, they punished me, took away my passport and my phone.

I continued to fight. I told my employer that I was a teacher and a tailor, and that was the work I was there to do, otherwise I would return to India. He replied that he would kill me, cut me into pieces and throw me into the sea if I continued to complain. I was terrified, but when he left the house, I spoke to his wife. I told her that it would be her loss if her husband killed me, because he would get jailed and her children would grow up fatherless. She said that I was a dangerous woman, and they sent me to a centre where people who refuse to work are sent.

There, I met many women from different countries. It felt like a market—potential employers would come and choose the workers they wanted. [Some of us] used to put coconut oil in our hair because they didn’t like the smell, hoping they wouldn’t choose us.

I finally managed to escape after a long time. All this happened because I couldn’t read the agreement properly and hadn’t taken the necessary precautions. To start with, the contract must be in a language that the women can read comfortably.

Today, I work with the National Domestic Workers' Movement in Hyderabad, which empowers women migrants. I have been with them now for 15 years. I survey areas [where women migrants work], talk to them about the problems they face and gather their stories.

I am doing this work because I think that the lessons I learnt from my difficult experiences can inform the decisions of young women aspiring to work overseas.”

Saleema Rahman, 50, advocates for women migrant and domestic workers’ rights to mobility and safe migration through the National Domestic Workers' Movement, a UN Women partner. She recently completed a UN Women Training of Trainers programme on safe migration and conducts Pre-Departure Orientation Trainings for aspiring women domestic workers in and around the southern state of Hyderabad, India. Her work contributes to Sustainable Development Goal 5 on gender equality and Goal 8 on decent work for all, including migrant workers.