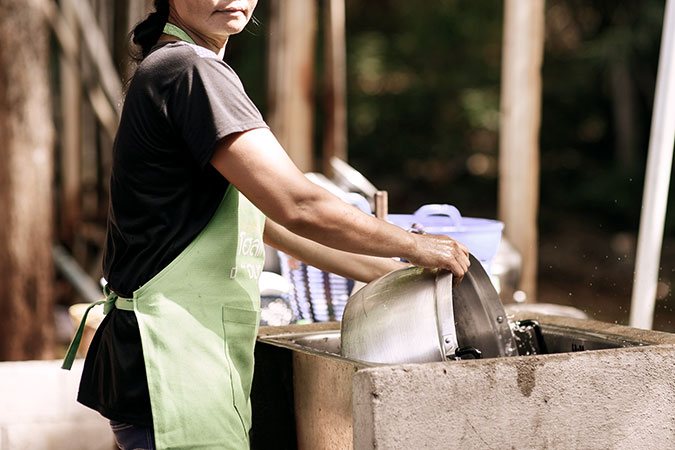 With a demanding employer who expects her to work round-the-clock, it has not been a happy home for Veena* in the past four years.

Veena is a 35-year-old live-in domestic worker in a wealthy home in central Bangkok. “I have not seen my family for some months now,” she says. “I get no break, no time off, no weekends...But I hope that the money I send every month helps to settle our debts soon.”

Veena, who traveled from her native northeastern province of Yasothon to work in the Thai capital, is among an estimated 21 million domestic workers from the Asia-Pacific region, out of which an estimated1.9 million are in exploitative, forced labour [1]. She is paid 11,000 baht (USD320) per month. Her job entails running the entire household; and additionally caring for her employer’s maternal home. Veena is entitled to 14 days of paid annual leave but no weekends or public holidays. When she goes over the 14-day leave entitlement, her pay is cut.

“Even though migration provides economic opportunities for some women and a financial safety net for their families, many women are highly vulnerable to unfair treatment, exploitation, abuse and different forms of violence,” said Roberta Clarke, Regional Director of UN Women Asia and the Pacific.

Live-in domestic workers in the region often experience multiple abuses, including low pay or no pay, debt bondage, no time off, inflated agency fees, and in some cases, sexual abuse, denial of health care services as well as physical and psychological abuse.

“Employers are the change-makers when it comes to stopping the exploitation of domestic workers. Making sure that their domestic workers have a weekly day off to spend where and how they please, as well as a way to communicate regularly with family and friends, are steps in the right direction,” said Tara Dermott, Programme Leader of IOM X.

With the support of UN Women and the Government of Australia, IOM X (an innovative safe migration and anti-trafficking campaign by the International Organization for Migration), in partnership with the U.S. Agency for International Development (USAID), have undertaken advocacy efforts to address the situation of domestic workers. They produced and launched Open Doors video series as part of the IOM X Happy Home Campaign in May 2016. The videos use dramatized stories based on the challenges faced by domestic workers and appeal to employers to form positive and respectful relationships with their domestic workers.

The three-part drama series follow the challenges of three families based in Singapore, Malaysia and Thailand, as they balance work, household duties and raising children with the help of their domestic workers. In each story, the family goes through a moment of reflection, where they recognize that everyone has rights, and that not meeting their domestic worker’s needs has a negative impact on both the family and their employee.

The Open Doors drama series have been aired online and on national television, and the Happy Home campaign videos have over 1.5 million views. By raising awareness of the rights and obligations of domestic workers and their employers, the campaign encourages employers to take the lead in creating happy home environments.

Related News
27/12/2017
A UN Women booklet helps smooth the journey for Lao migrant workers in Thailand
15/11/2021
How women migrants in Thailand are stopping trafficking and gender-based violence in their communities
12/07/2019
Gaining protection for Indonesia’s migrant workers and their families
01/07/2019
Empowering South Asian women migrant workers through improved contracts
26/02/2018
From where I stand: “I kept the courage and managed to escape”
END_OF_DOCUMENT_TOKEN_TO_BE_REPLACED