Towards safe migration and decent work for women in Nepal

Dawa Dolma Tamang migrated from rural Nepal to Abu Dhabi because she wanted to improve her livelihood and support her family. She ended up paying seven times more than what was required to the recruiting agency and was wrongfully denied work on medical grounds. With the help of Pourakhi, an organization working to protect migrant women’s rights, she was able to seek legal assistance and recover some of her money. Today, Tamang is working as a mason and will soon start taking the vocational and entrepreneurship skills training provided by a UN Women programme that’s advancing women’s economic empowerment in Nepal. 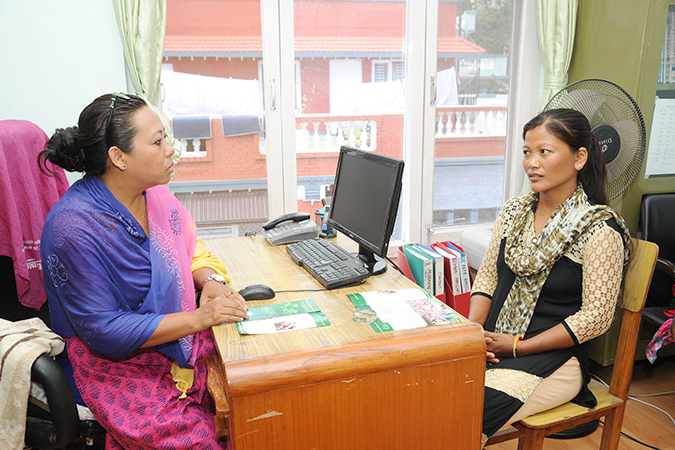 In August it’s blazing hot in Kathmandu. Dawa Dolma Tamang, 32, sits on a chair at Pourakhi’s office—an organization that works with migrant women workers—staring out of the window. “I want to send my children to a better school and support my husband to make a decent living. I want to make my family whole again," she says.

Tamang’s story started in April 2016 when she left her remote Maheshwari village in Eastern Nepal to work in Abu Dhabi, only to find herself declared medically unfit for work upon arrival and returned to Nepal, penniless.

“I migrated because I wanted to earn an income and change my life,” she shares. Tamang’s husband was alcoholic, she had two children to support, and she saw migration as the only way out of the clutches of poverty. According to the latest report [1] on foreign migration launched by the Department of Foreign Employment in Nepal, an estimated 21,421 Nepali women are legally working overseas as of 2014-2015, mostly in the United Arab Emirates, Saudi Arabia and Kuwait.

A recruiting agent offered Tamang a job as a cleaner in Abu Dhabi and promised her a salary that she couldn’t imagine earning in Nepal. She left her children in the care of her sister-in-law and went to Kathmandu to get her visa. “I was completely unaware that the recruiting company in Abu Dhabi was paying for my visa and tickets…the agent in Nepal charged me seven times more than what was required. I had to give him NRS 70,000 ($700)!”

Soon after arriving in Abu Dhabi, Tamang was taken to a one-room apartment shared by eight other women. As part of the recruitment process, a doctor visited her on the third day for a medical examination, which included a tuberculosis test. Although she tested positive for latent tuberculosis (TB), she was not given any information about her medical condition. After 45 days, she was taken to a hospital, where she tested positive again. The doctors at the hospital finally told Tamang that she was suffering from latent TB and treated her. When Tamang was discharged from the hospital after 25 days and declared medically fit to work, the recruitment company refused to employ her. She was given a ticket and forced to leave Abu Dhabi the next day.

“I came home with no money and a strange illness for which I had to still take medicines,” she recalls. For the next one month, Tamang stayed at her sister’s house in Kathmandu trying to claim compensation from the recruiting agency, to no avail, as she didn’t have all the receipts and couldn’t prove that the agency had over-charged her.

Tamang’s story is dismally common among Nepali women migrants, explains Manju Gurung of Pourakhi (which means self-reliant in Nepali language), a non-governmental organization which is supported by UN Women and works to protect the rights of female migrant workers. “Nepali migrant workers lack protection, are victims of non-payment of wages, retrenchment without notice or compensation, as well as unsatisfactory occupational health and safety conditions,” says Gurung. The problem has been exacerbated by recruiters, who do not share the risks involved and by employers who take advantage of the women's vulnerability as they cannot access the legal system in the host country. 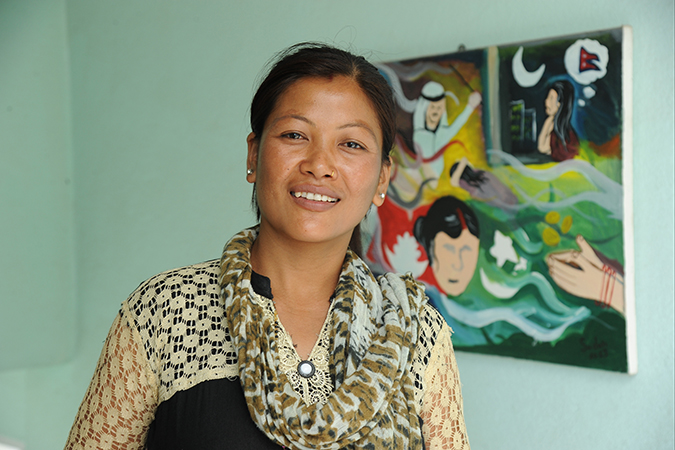 “What we urgently need, is to effectively implement the Foreign Employment Act and its regulations, as this would not only end discrimination based on gender, but also adopt special measures to guarantee women's security and rights when seeking jobs overseas, by holding employers and recruiters accountable,” says Mio Yokota, UN Women Programme Specialist in Nepal.

According to the law, a returnee migrant is eligible to claim full compensation for the money she paid to the recruiting agency if she was declared medically fit to work and still returned on medical grounds by the recruiter. With legal assistance with Pourakhi, Tamang was able to recover 60 per cent of the money that she had paid to the agency. “If I had all the receipts for the amount I paid, I would have been compensated 100 per cent. This has been a hard lesson for me.”

Today, as she gets her strength back, Dolma Tamang is planning for a better future. She is working as a mason and saving to pay back the loans she took to migrate. She will be enrolling in the upcoming vocational and entrepreneurship skills training as part of UN Women’s Advancing Women’s Economic Empowerment programme in Nepal, funded by the Government of Finland. The programme aims to support 2,000 women, including returnee migrant workers, provide business start-up and employment placement assistance and linkages to financial and private sector institutions.

Related News
10/05/2016
Getting back on her feet again in Nepal
12/12/2019
Rickshaw drivers break stereotypes in Nepal
01/07/2019
Empowering South Asian women migrant workers through improved contracts
27/02/2019
Grooming her business in Nepal: Beautician-turned entrepreneur
26/02/2018
From where I stand: “I kept the courage and managed to escape”
END_OF_DOCUMENT_TOKEN_TO_BE_REPLACED