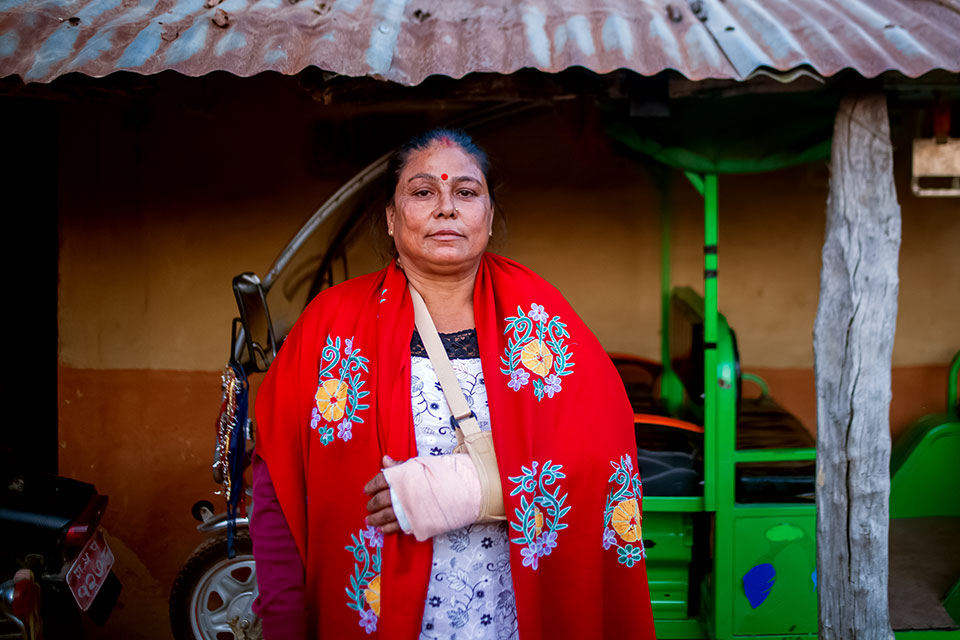 Hira Kumari Sewa, 47, is one of the eldest participants of the e- rickshaw driving training for returnee migrant workers in Nawalparasi. Photo: UN Women/Merit Maharjan

Hira Kumari Sewa is among the few female rickshaw drivers in Nepal. Service is literally in her name.

“I am Hira Kumari Sewa and I provide rickshaw ‘sewa’ (‘service’ in Nepali),” jokes the 47-year-old from the Nawalparasi district, south-central Nepal, as she introduces herself. But her jovial nature masks a lifetime of challenges that have shaped her into the independent woman she is today. 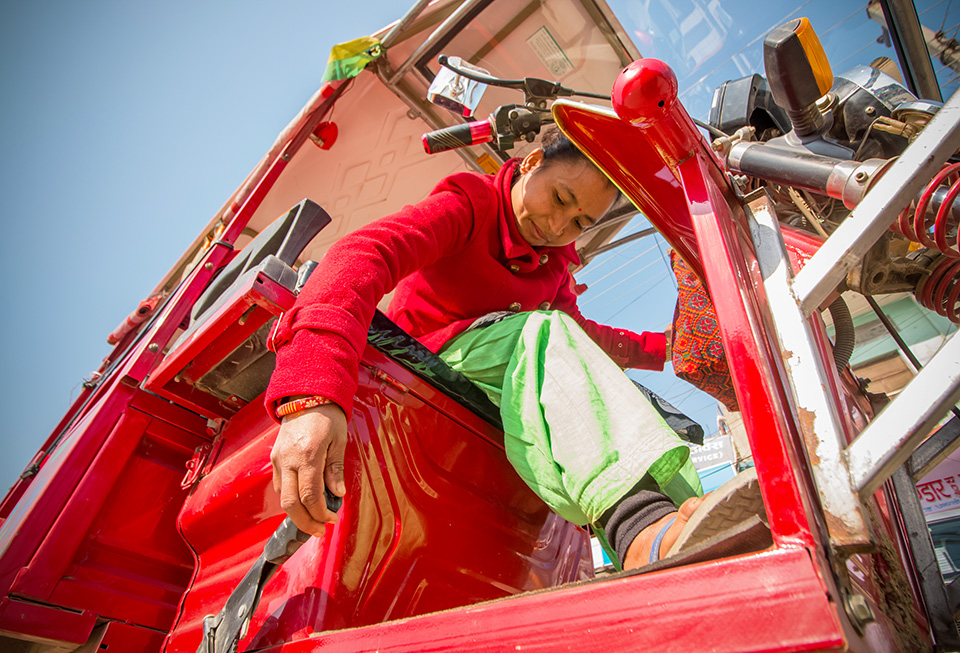 “I was married to a military recruit at 13,” says Sewa. Her husband later married two other women, leading to marital strife. After over a decade, she finally left him because of his mounting alcohol addiction and focused on raising her two sons.

She relied on domestic work to keep her family afloat. She went house-to-house cleaning, dishwashing and doing laundry. Even though the income was low and irregular, for a Nepali woman with no educational qualifications or vocational skills, there were few other alternatives.

Eventually, she went to Dubai in search of better opportunities, assisted by her brother-in-law, who also worked there. In 2017, 69.4 per cent of Nepalese international migrant were women, much like Sewa[1]. With help from the agency that arranged his employment, Sewa began as a cook and housekeeper. The family was kind, but the work was demanding, and she barely had any free time. The pay was better than in Nepal – 800 dirham a month (approximately USD 220)—although mostly irregular. She was rarely allowed to leave the house and she felt isolated.

On the bright side, she saved most of what she earned, and the money helped her repay her loans and provide a better education for her children. As UN Women’s recent Progress of the World’s Women Report shows, migration is a major force affecting family life and how women live in families.

After working the same job for four years, Sewa returned home at the insistence of her sons. Shortly thereafter, she learned about the e-rickshaw (battery-operated three-wheelers) training being offered to returnee women migrant workers under UN Women’s Advancing Women’s Economic Empowerment Programme, funded by the Government of Finland. She immediately signed up.

“Due to my low social and financial status, I had always only faced humiliation and dissent,” she says. “But here was an opportunity knocking right on my door.”

Along with driving skills training, the programme has provided participants with information on gender equality and social inclusion. In August 2018, she completed her training and obtained her rickshaw license.

“In the beginning, people would often comment that I was too old for the job,” she says. “Even younger women e-rickshaw drivers weren’t safe from snide remarks. Some locals wondered why women had to work so hard when they would eventually have to get married.”

“But I didn’t let that get to me,” says Sewa, and neither did the other women drivers. “The training gave us enough confidence to tackle such situations and persevere.”

Now, although change is still needed, she says the locals have become more accepting of women drivers, some even encouraging.

“The e-rickshaw project is innovative, as it has helped returnee women migrant workers reintegrate in society by providing them with employment and income opportunities in a non-stereotypical, non-traditional occupation,” explains Mio Yokota, Head of the Women’s Economic Empowerment Unit in UN Women Nepal. “Women e-rickshaw drivers also become agents of change in their communities, demonstrating themselves as role models. This will pave a path for more women to defy societal stereotypes.”

Today, Sewa heads a large family, comprised of her mother, two sons, two stepdaughters and her five grandchildren, who look to her as a role model.

“Today, I feel proud as a mother when people come and share good things about Hira and what she has been doing,” says Sewa’s mother, who raised her daughter’s children while she was away forging her path to independence, and now raises her grandchildren.

Sewa says driving an e-rickshaw has opened doors to many opportunities for her and her family. “Even though I did not receive an education myself, I am at least able to send my stepdaughters to good schools with my income, which will help them build a successful career. I am also saving to finance a vehicle for my sons, so that they can also set up their own small business,” she says.