Towards safer work and migration for women

Safe migration enables equitable, inclusive growth and human development for countries of origin and destination. It brings enormous benefits to economies and migrants and their families. Remittances to developing countries, which reached an estimated USD 406 billion in 2012, are three times the size of official development assistance and are expected to continue growing[1]. Around the world, a record number of women migrate to seek work and better lives. 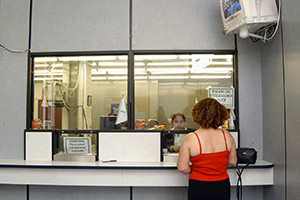 Woman getting her remittance: Many women left behind rely on remittances for their survival. © IOM 2012

But all too often, migration can carry dangerous risks, such as exploitation in domestic jobs, and vulnerability to violence. According to the new Secretary-General’s Report on Violence against women migrant workers, submitted to the 68th General Assembly, many women migrant workers face discrimination, violence and exploitation at all stages of migration. For example, Almaz*.

Like tens of thousands of young Ethiopian women who leave the rural countryside to work in homes across the Arab States and North Africa, Almaz saw migration as an escape from poverty.

“I went because I wanted to get an income and change my life,” says Almaz, a 30-year-old woman from Ethiopia’s northern Amhara region, recalling how she travelled to Saudi Arabia in 2012 as a domestic worker. Soon after arriving, she was forced to do work she was uncomfortable with, including caring for a sick and elderly relative of her employer. “I told them that I didn’t want to do it. When I refused, they didn’t give me food.”

She subsequently fell ill and had to be hospitalized. She was further tortured and subjected to an acid-attack by her employers.

Abusive working conditions, such as the forced labour experienced by Almaz, are not uncommon. Women migrant workers’ lack of access to information on legal channels of migration and terms of work makes them vulnerable to unscrupulous recruiting agents and traffickers. This puts them at risk of abuse, in addition to hampering access to justice for survivors of violence.

Eni Lestari Andayani Adi, from Indonesia tells a similar story. “The recruitment agency forced me into confinement in a training camp for five months. I was… verbally abused and even witnessed torture and rape of my friends,” recalls Adi, who later managed to escape the abuse and went on to start the Association for Indonesian Migrant Workers in Hong Kong. 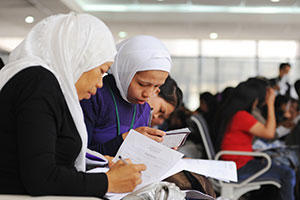 The IOM arranges and facilitates the repatriation of a first group of 261 Filipinos from Syria via Jordanian Aviation flight 4371 from Damascus. © IOM 2012 (Photo: Ray Leyesa)

The Secretary-General’s report highlights the efforts of various UN entities, including UN Women’s advocacy and awareness-raising around the use of legal migration channels and human and labour rights protection for women migrant workers. It highlights a range of efforts in various parts of the world, which are working to empower women migrant workers, such as: foreign employment policy that recognizes and protects the rights of women migrant workers in Nepal; efforts that facilitated women migrant workers’ participation in consultations on the national action plan on violence against women in Cambodia, particularly survivors of violence; and  analysis of policy and legislation on labour migration in Kazakhstan, Kyrgyzstan, the Russian Federation and Tajikistan.

Employment and migration is a key pillar of UN Women’s work on economic empowerment, whereby the organization supports advocacy for national economic and social policies and legislation, as well as frontline services, information and capacity-building. As a member of the Global Migration Group, and in close collaboration with Member States who form part of the Global Forum on Migration and Development, UN Women also supports the UN System to include gender in global policy discussions, such as the High-Level Dialogue on Migration taking place in New York from 3-4 October.

The report reiterates that key gaps persist in implementing global agreements and stresses the need for targeted measures to specifically tackle discrimination and violence against women migrant workers.

In Ethiopia, for instance, UN Women, the International Labour Organization (ILO)and International Organizaton for Migration (IOM) initiated a programme in September 2013 to support and protect Ethiopian women domestic workers migrating to Gulf Cooperation Council countries (Saudi Arabia, Qatar, UAE, Oman, Bahrain and Kuwait) as well as to Lebanon, Sudan and South Sudan. The programme will support the Government of Ethiopia to ensure the rights of low-skilled rural women domestic workers, inform them prior to migration and establish safe havens for returnees like Almaz. She managed to escape Saudi Arabia and received sewing training through a programme of the Ethiopian Orthodox Church, supported by UN Women.

“When I came back I was in a bad situation and this training has been important to me... I want to use my skills to earn an income to support my two children,” says Almaz.

Domestic workers rap at a regional preparatory meeting for the High-level Dialogue on Migration 2013:

[1] According to the World Bank, global remittance flows, including those to high-income countries, stood at an estimated USD 513 billion in 2011. They are forecast to reach USD 623 billion by 2014, of which USD 467 billion will flow to developing countries.