“Come on women, it’s time for us to stand up and fight! That’s how I felt,” recalls Graciela Espinosa, a Uruguayan domestic worker. In June 2011, together with a colleague, she represented the Single Union of Domestic Workers (SUTD) at the 100th Conference of the International Labour Organization (ILO) in Geneva, where the historic Convention 189 was adopted. 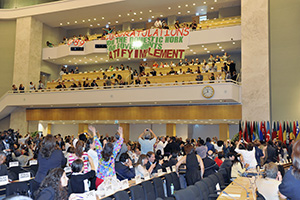 “It was really gratifying to know that so many colleagues, who don’t have any laws or safeguards in their countries, now have Convention 189 as a tool to start fighting for their rights,” says Graciela.

This legal instrument represents a watershed for the rights of the estimated 53-million domestic workers worldwide, 83 per cent of whom are women.

It puts the labour rights of this traditionally unregulated sector, where the majority work as domestic help in private households, on par with other sectors of workers. Among other things, it includes fixed hours of rest, the right to a minimum wage, social security, protection for migrant workers and the right to live outside of the house in which one works.

In Latin American, over 14 million women are employed as domestic help for families, making it the largest occupation for women in the region; it is also the most lacking in decent work standards.[1]

Uruguay was one of the leading promoters of the Convention, and the first country to ratify it as part of its national legislation. The Philippines was the second country to do so, enabling the Convention to enter into force on 5 September 2013.

With support from UN Women and the Uruguayan Ministry for Work and Social Security, Graciela and a colleague travelled to Geneva to take part in the ILO conference, where Convention 189 and Recommendation 201 were discussed and adopted.[2]

“In every paragraph of the Convention, I see my life,” says Graciela. Now aged 47, she has spent 33 years as a domestic worker in Uruguay. She started working at age 14, as a live-in servant in a working-class area of the capital, Montevideo and suffered, like so many others. “You realize that we all went through the same things: the injustice, the abuse, the mistreatment, the harassment – things that you don’t want happening to anyone else.”

In the run-up to the Geneva Conference, the Uruguayan women and their colleagues from Brazil, Chile and Paraguay worked together. They met a month beforehand in Asuncion, Paraguay, supported by the UN Women project “Domestic work in Mercosur: knowing rights in order to defend them.” The women issued a position paper and maintained a united front to increase their weight in discussions, and their chances of success.

Once in Geneva, they united with women workers from other parts of the world, and despite language barriers, they managed to understand each other and combine strategies.

“We realized that we had all suffered, some because of racism, others because of migration or poverty. But we felt we were among equals,” she recalls.

But there are positive signs— Latin America and the Caribbean also tops the list of regions with the highest number of ratifications of Convention 189.[3] Uruguay in particular has been recognized by the ILO, along with France and Morocco, for having the best legislation in the world regarding domestic work.[4] It grants domestic workers rights equal to other occupations and guarantees their right to participate in collective bargaining.

“In Geneva, we spoke out on behalf of our colleagues, from the trade union confederation and from Uruguay,” explains Graciela. “At that point, our country had already achieved all the provisions of the Convention at national level. We were hugely proud of having contributed to other women workers of the world gaining the rights that we Uruguayan women already had. The feeling is so powerful that it seems it was only yesterday, even though it was two years ago now.”

Yet, much remains to be done. In Uruguay, 120,000 people are employed in domestic work, but according to official figures, half of them are working informally, as in without contracts or job security. But Graciela continues to work so that workers can understand and use the laws created to demand their rights when necessary.

UN Women continues to support domestic workers from the Southern Cone of South America through the project “Regional strategy for the ratification of Convention 189 and Recommendation 201.” In October 2012, UN Women and the Trade Union Confederation of the Southern Cone brought together representatives working on women’s rights all the national federations and unions in those countries.

“Today, the domestic workers’ unions of Argentina, Brazil, Chile, Uruguay and Paraguay have a shared action plan, a tool that will support them when they speak out with proposals and achieve ratification of the Convention and its Recommendation in all the countries of the Southern Cone, as has happened in Uruguay and Paraguay,” says Alejandra Iervolino, UN Women Uruguay. “In this way, we have contributed to domestic work being present on the agenda of the trade union movement in the region.”

For Graciela, having a shared regional platform strengthens everyone: “If we all go forward together, no one will have any doubt that we are not servants, or maids, or slaves; nor are we ‘one of the family’. We are workers and that means that we have rights.”

[2] Recommendation 201 provides practical guidance on possible legal measures enabling the rights and principles established in the Convention to become a reality.