Police and Judges against Gender Violence in the Southern Cone 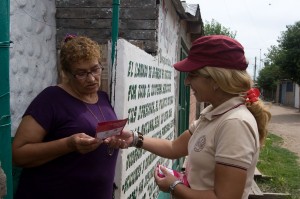 UN Women and the United Nations Office on Drugs and Crime (UNODC) released a study in July 2011 that assessed the mechanisms currently in place to respond to gender-based violence in the Southern Cone. The study stresses that violence against women, especially within families and between partners, continues to persist. It also looks at the steps taken by governments to combat the issue through legal and judicial measures, as well as through the work of security forces.

Specialized police units in Brazil, Uruguay and Argentina are often deployed by governments as their first response to the problem of domestic violence. In Rosario, Argentina, the Municipal Urban Guard (GUM) is coordinated by Mariano Savia. UN Women has worked closely with GUM, training its agents as part of the ‘Cities without Violence against Women, Safe Cities for All' programme, which is financed by the Spanish government.

Thanks to the work of GUM, Rosario is leading the way in Latin America in terms of improved safety for women. Savia states that GUM's work has helped create a protocol for the intervention of domestic violence, and that it is currently yielding positive results. Savia also notes that domestic violence complaints in Rosario have risen, a sign that women have increased confidence that their grievances will be taken seriously.

Where domestic violence legislation exists, it tends to lack a gender focus. In Paraguay, the Gender Secretariat of the Judiciary, which is the first of its kind in the Southern Cone, works to enforce women's legal rights. Judge María Mercedes Buongermini, who leads the Secretariat, says that progress has to be made in educating the mindsets of judiciary officers as well as individuals who have recourse to the justice system. She adds that UN Women has supported the Secretariat since its creation a year ago, as well as helping other projects, such as one by the non-governmental organization Comité de América Latina y El Caribe para la Defensa de los Derechos Humanos de la Mujer (CLADEM) that provides monitoring and training to improve access to justice for women survivors of violence.

Maria Graciela Mendoza, the coordinator of this programme and Carmen Echauri, the director of UN Women in Paraguay, have both praised the work of the Gender Secretariat and CLADEM, saying that the work of these organizations has helped lead to the condemnation of violence against women in the Paraguayan institutional agenda. Evidence of this exists in the preliminary draft bill for a Comprehensive Law for Combating Violence against Women that is currently being prepared by the executive, legislative and judicial branches of the Paraguayan government. This is a law that Buongermini considers groundbreaking and that is poised to bring hope to many women.

Violence against Women in the Southern Cone

Giving Voice to Women: Violence against Women in the Southern Cone (Part 2)