Violence against women and girls is a pervasive human rights violation that persists in every country in the world and cuts across all socioeconomic groups and cultures. Nevertheless, a UN study launched today highlights that indigenous girls are at heightened risk due to the multiple and intersecting forms of discrimination they face. 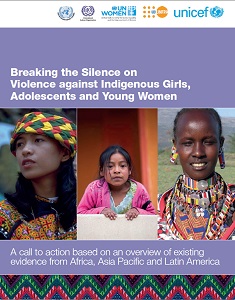 Such discrimination has been caused or amplified by colonial domination, limited access to social services, militarization and dispossession from ancestral lands – all of which increase the vulnerability of indigenous girls to violence and limit their ability to seek protection and recourse.

The study, entitled “Breaking the Silence on Violence against Indigenous Girls, Adolescents and Young Women: A call to action based an overview of existing evidence from Africa, Asia Pacific and Latin America,” was presented today alongside the XII Session of the UN Permanent Forum on Indigenous Issues taking place at UN Headquarters in New York.

“This study is more than research to shed light on a serious yet neglected social issue. It is a call to action for Governments, UN agencies, communities and civil society organizations to take urgent action to address these human rights violations,” said John Hendra, UN Women Deputy Executive Director for Policy and Programme, in his speech at the launch event, organized by all collaborating UN bodies.

The report is the result of collaboration among UN Women, the United Nations Population Fund (UNFPA), the International Labour Organization (ILO) and the Office of the Special Representative of the Secretary-General on Violence against Children, under the overall lead coordination of UNICEF.

The first of its kind, the study reviews existing quantitative and qualitative data on the prevalence and incidence of the types of violence which have already been documented against indigenous peoples in Africa, Asia and Latin America. Three countries were selected, one per region, to illustrate the findings: Guatemala, Kenya and the Philippines.

“Most worrying is what has emerged as a persistent denial of State protection as manifested in the lack of response, follow-up and prosecution from the police, the compromised situation of the judiciary, and the unavailability of culturally appropriate prevention and response services,” said Victoria Tauli-Corpuz, lead consultant of the study and former Chair of the Permanent Forum, during her presentation of an overview of the findings.

“These are exacerbated by language barriers, geographical remoteness of indigenous territories and by patriarchal and discriminatory attitudes of personnel in these institutions, resulting in serious gaps in response and corrective measures,” she said.

He mentioned several ongoing initiatives that have had significant impacts on indigenous communities in a number of areas such as legal reform, protection, prevention, and response services to effectively address violence against women and girls, including the establishment of specialized centres and mobile units for indigenous women and girls who have been affected by violence in Guatemala, Mexico, Argentina, and Paraguay. 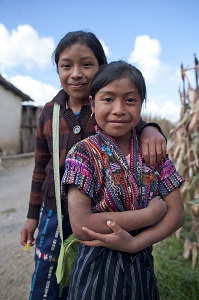 Indigenous girls in Guatemala. Photo credit: United Nations Trust Fund to End Violence against Women/Kara Marnell
The study concludes with a series of recommendations, including the need to enhance data collection and analysis, reporting and monitoring of violence by sex, age and ethnicity; to address the existing gaps in knowledge; and to integrate issues affecting indigenous girls and young women into the procedures of national, regional and global human rights monitoring and reporting systems.

It recommends tackling discrimination and gender inequality, as root causes, while stressing the need for conflict prevention and participatory development as critical to prevention. The study also calls on Governments to promote access to justice and end the culture of impunity, as well as provide age, gender and culturally appropriate comprehensive services.

Finally, it recommends more partnerships with indigenous communities and calls on Governments to allocate adequate human and financial resources for legal and policy reforms, action plans and strategies to ensure that all relevant institutions can implement reforms in a coordinated manner.