Joint UN statement read by John Hendra, Assistant Secretary-General and Deputy Executive Director Policy and Programme, UN Women at the launch of the inter-agency study: “Breaking the Silence on Violence against Indigenous Girls, Adolescents and Young Women: A call to action based an overview of existing evidence from Africa, Asia Pacific and Latin America” on 28 May 2013 in New York. 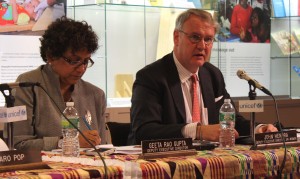 It gives me great pleasure to make this brief joint statement on behalf of all the UN agencies and bodies that sponsored this important study on violence against indigenous girls, adolescents and young women.

As discussed, we are here to shed light on a matter that has remained hidden and which has brought significant pain and suffering to both individuals and families. It deserves our full attention, and our concerted action. This is why the UN agencies involved have joined forces “as one” to prepare and launch this study to bring to light the unacceptable violence faced by indigenous girls, adolescents and young women.

As we all know, the journey towards ending violence for all women and girls has not been easy. From the 1985 Nairobi Forward-Looking Strategies to the most recent landmark 57th session of the Commission on the Status of Women in March, the world has made major commitments and taken significant steps towards ending violence against women and girls. Yet despite the progress made, violence against women and girls continues unabated, is one of the most widespread human rights violations in the world, whose perpetrators all too often enjoy impunity while the victims are denied justice.

As we also all know, violence against women and girls is deeply rooted in gender inequality and structural discrimination. It is compounded by factors such as global insecurity, lack of access to basic social services, low rates of birth registration of girls, and by laws and policies that, while very well-intentioned, often have little impact in practice because they remain unenforced, and are not properly supported programmes and budgets to ensure that much needed services, and real justice, are available to survivors.

The research being launched today the presents for the first-time evidence regarding the unique characteristics and the many forms of violence experienced by indigenous girls, adolescents and young women. Violence linked to their multiple identities including sex, age, race, ethnicity, location, economic circumstances and, in some cases, disability.

The multiple forms of discrimination that they experience place these women and girls in a particularly severely disadvantaged position. This increases their vulnerability to violence and limits their ability to seek protection and recourse.

In that context, this study represents more than just new evidence on a serious but largely neglected problem, important though this is. It also offers a call to action to Governments, UN agencies, communities and Civil Society Organizations to take urgent action to address the human rights violations these girls and young women experience. To this end, it proposes a number of recommendations to guide future action to end violence against indigenous girls and young women:

First, it recommends better sharing of innovative practices from ongoing initiatives that have made a real difference in indigenous communities in areas such as legal reform, protection, prevention, and responsive services that effectively address violence against women and girls. Successful efforts to improve birth registration among indigenous communities such as the Mizoram in the North Eastern part of India, where the population of Scheduled Tribes exceeds 90 per cent, and the establishment of specialized centres and mobile units for indigenous women and girls who have been affected by violence in counties such as Guatemala, Mexico, Argentina, and Paraguay, provide examples of promising practices from which lessons can be learnt.

Secondly, although the study notes a severe shortfall in the availability of data, the report also highlights that existing data collection exercises can be better used to gather information and make a solid case for an effective response. Opportunities include using existing surveys such as Demographic and Health Surveys (DHS), the Multiple Indicator Cluster Surveys (MICS) developed by UNICEF, the Child Labour Surveys of the ILO, and other national household surveys, to disaggregate and analyse data collected by sex, age, ethnicity and location in order to better understand and present the full extent to which indigenous girls, adolescents and young women are affected by violence.

Thirdly, the report recommends that critical gaps in existing evidence identified by this study now be used to help shape the future research agenda, highlighting the need for a more in-depth understanding of the extent to which indigenous women and girls are affected by violence. Any future research agenda must also take into account significant gaps in data by region and in particular the extremely thin information available in the Africa region where greater data collection on these issues needs to be prioritized.

Fourthly, and critically, the study recommends that policies and programmes developed must address the root and structural causes of violence. This would include taking steps to eliminate both de jure and de facto discrimination against indigenous peoples in general, and girls, adolescents and young women in particular, as well as addressing gender inequality and discrimination at the root of harmful norms and practices, while at the same time revitalizing positive cultural values that can help to protect against violence.

Last but not least, the study points to the urgent need to focus on prevention. Initiatives to keep girls in school, and to provide appropriate responses and services to girls who have experienced or are at risk of violence, and ensuring these take into account all aspects of their culture and identity are critical priorities.

Together we need to maximize opportunities like these to disseminate and implement the findings of this research. Going forward, it is critical that the findings and recommendations of this study inform and are fully integrated into ongoing discussions and outcomes of various global agenda-setting processes, including the 2014 World Conference on Indigenous Peoples, the beyond 20 Review of the International Conference on Population and Development (ICPD), and the development of the post-2015 development framework, among others.

As all UN agencies present today, we also undertake to strengthen our efforts to protect the rights of indigenous girls and women, in line with our specific mandates. We pledge to use the findings of the study to better inform and improve the reach and quality of our work. And today we also commit to doing our part to ensure that the study has a substantive impact on the work of the UN system as a whole.

As this launch demonstrates, UN agencies are committed to “delivering as one”, in particular on important human rights issues such as this: preventing and ending violence against indigenous girls and women. Let me conclude by offering our joint appreciation for the strong collaboration and support from the UN Permanent Forum on Indigenous Issues and the International Indigenous Women’s Forum throughout this process, which has been critical to the success of this study. We are deeply appreciative of your support, and look forward to continued collaboration as we work together to turn the recommendations of this important study into concrete actions that will make a real difference in the lives of indigenous girls, adolescents, and women everywhere.

Inter-agency study: “Breaking the Silence on Violence against Indigenous Girls, Adolescents and Young Women: A call to action based an overview of existing evidence from Africa, Asia Pacific and Latin America”