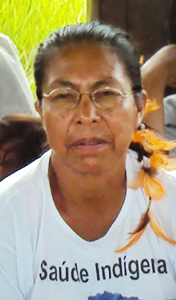 There's a lot of violence here and, before, we weren’t empowered to defend ourselves,” explains Priscila Maciel Duarte Lopes, a 51-year-old indigenous Brazilian Guarani-Kaiowa community leader. “Now we know that the most important thing is to help each other, because we don't get help from outside. [But] if we are united, we can ask the Government to come and do something for the tribes," she says.

Brazil has a population of around 896,000 indigenous persons, from 238 ethnic groups, who speak over 180 languages. In Paraguay, the figure is 108,000, in 20 populations with five different languages. On the border between the two countries, indigenous persons are an estimated 15,000. They belong predominantly to two ethnic groups, the Guarani-Kaiowa and Ayoreo. Three years ago, Project Cuña, which means “woman” in the Guarani language, was set up by UN Women, along with the Paraguayan NGOs BASE-IS and Sobrevivencia (“Survival”), and the Brazilian IBISS-CO.

The project began with a programme for young indigenous women, which encouraged them to take an active role in tackling rights violations in their communities. Special attention was given to the trafficking of women, which has been exacerbated by migration flows and by large-scale developments, especially in agri-business.

The women received training in human rights, gender issues and local culture, as well as in preventing human trafficking and in standing up to the expansion of agri-business into indigenous lands. The workshops also trained women themselves to collect data on rights violations in their communities, thereby strengthening the education of women community leaders. The whole process was translated into the two main mother tongues of Guarani and Ayoreo, to ensure that information was spread among the communities.

What impressed me most about the project was the reaction of these women. A lot of the abuses that they suffered were considered normal in the communities. When they realised this, they were quite shocked,” says Nilda Pereira, coordinator of Project Cuña.

Gradually, the women started to understand and identify rights violations. Before the training sessions, they didn’t recognize the cases of human and organ trafficking that were happening in their communities. But, by the end of the trainings, they felt empowered to take action to stop these cases from happening. Not only did they learn to recognize and identify violations, but also to report them and to intervene in local disputes.

Subsequently, the investigation carried out by indigenous women found a total of 140 cases of rights violations in the communities over a two-year period. These included: 50 cases of domestic violence against women; 39 of violence against children and youth; 14 of sexual abuse of children and adolescents; 8 of human trafficking, and many more in several areas.

The indigenous people in this region traditionally hold regular Aty Guasu, meaning “great assembly” in Guarani. The Aty Guasu are meetings where indigenous leaders, traditionally dominated by men, discuss the problems that the tribes share. They look for solutions to conflicts and exchange experiences.

The first-ever Aty Guasu Cuña, or “great assembly of indigenous women,” in the region was held from 25- 29 April, in the village of Bororo, in Dourados, Brazil – with over 500 participants. The aim, as Juliana Borges of IBISS-CO explains, was to create an alternative body for women, who have traditionally been in the minority in the Aty Guasu.

It was raining heavily but still lots of women came together, although some tribes didn’t want to be involved. The indigenous women talked a lot about women’s empowerment in the villages, as well as about sexism. Many of them had problems because their husbands, or villages, didn’t want them to take part in the Aty Guasu Cuña. It was a very productive meeting because there was a passionate exchange of ideas. The satisfaction of those women at having taken part in the assembly was remarkable,” says Marilza Drum, former IBISS representative who took part in the first Aty Guasu Cuña.

At the meeting, the indigenous women expressed themselves as a political force and made a series of demands from the public authorities. These included security for women in the villages, the demarcation of lands, guarantees that women of the Aty Guasu Cuña council would be involved in creating and implementing Government programmes and actions for indigenous peoples, recognition and strengthening of their traditions and cultures, health programmes for indigenous women, and food security.

Since then, smaller assemblies of indigenous women have been held.

The indigenous communities don’t have the means for travel, accommodation and transport. Support from UN Women was vital in helping to make it possible to organize a second, consolidated, assembly. It allowed for a meeting of indigenous women who shared their knowledge and skills. As a result, they developed new ways of tackling violence with a gender perspective,” says Rebecca Tavares, UN Women representative in Brazil. 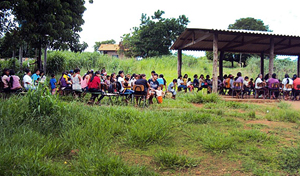 The second Aty Guasu Cuña was held in January 2013, also in Dourados, Brazil, where women were able to share their experiences of looking for strategies to deal with the situations of violence going on in their communities.

Both the workshops and the two Aty Guasu Cuña have enabled women to recognize and prevent rights violations in their communities. Both assemblies also produced information leaflets on preventing human trafficking, in Spanish and Guarani.

A third great assembly has already been planned for 6 March in the region of Sombrerito, Paraguay.

Before the project, I accepted the problems that we were having,” says Priscila. “Then I met other indigenous women, I learned things, I was in the big city and having discussions with many people. I understood more and more. Now I am a community leader and I can help my people. We want to hold more Aty Cuña. Together, indigenous women are strong,” she says.

Related News
29/05/2013
Breaking the silence on violence against indigenous girls: UN report calls for urgent action
23/05/2019
From where I stand: “We are the solution in Brazil, not the problem”
03/03/2014
In the words of Tsitina Xavante: My father told me ‘I want you to be able to help your people one day’
08/08/2013
International Day of the World's Indigenous Peoples
13/06/2013
Domestic workers in the Southern Cone push for rights with ILO Convention on their side
END_OF_DOCUMENT_TOKEN_TO_BE_REPLACED