In the words of Tsitina Xavante: My father told me ‘I want you to be able to help your people one day’

In the words of Samantha Ro’otsitsina de C. Juruna (Tsitsina Xavante), a 28-year-old indigenous woman of Xavante heritage from Namunkurá community in the indigenous territory of San Marcos, Mato Grosso state, in the Amazonian region of Brazil. Trained in social services, she has a Masters in Sustainability for Indigenous Peoples and Territories. She is a member of the Comisión Nacional de la Juventud Indígena (CNJI – National Committee for Indigenous Youth) and the Red de Juventud Indígena (REJUIND – Indigenous Youth Network).

The actions and initiatives of women, especially young women, are important in influencing public policies and advancing the rights of indigenous people. Within the indigenous movement in Brazil, more indigenous men are represented, but at the same time all young people and indigenous women are trying to overcome the challenges of the world of politics, including participation in decision-making. 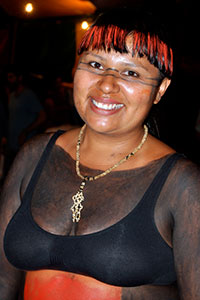 I believe that one of the actions that can be taken to support indigenous women in contemporary processes of participation in decision-making and consolidation of the legal framework is to strengthen and recognize indigenous women for who they are – with their knowledge and sensitivity to see beyond the present moment with a view to improving future generations. The critical thinking that leads us to this belief does not mean that we want to impose cultural questions; on the contrary, we mean that culture is dynamic. In this sense, we as women can also be active and effective in political decision-making.  We do not want to offend men, but be united. We also promote sustainability in health, education, culture, and territorial matters, with an intergenerational view.

These obstacles are being surmounted. I am a young Xavante woman. I work mostly in the field of political rights for indigenous people, on a national rather than a local scale, on cultural problems that play a role in political discussions. My contributions have gained national recognition, which makes my work easier and helps me to achieve better results in political training processes among my own people.

But there are even strong cultural aspects. I am not married and have no children. Some men in my tribe do not understand these factors that affect contemporary women. It is not their fault. After 75 years of contact with non-indigenous societies, we have no record of a Xavante woman capable of political debate and support for the rights of indigenous populations. This is a recent political and cultural story for my people.

I am currently undergoing a phase of collective learning as a young Xavante woman with experience in local politics, which had previously only been the domain of Xavante men. Some of these men are taking advantage of the opportunity to learn about the experiences I have had in the national indigenous movement. In other indigenous groups in Brazil women are already participating, and many of them are contributing to debate within the indigenous movement. But for the Xavante people, cultural resistance to having a woman involved in decision-making is still a challenge that has to be overcome, by both women and men.

But what encourages me most is knowing older people who support my contribution to helping uphold our rights. A Xavante elder called João Marinho Tsi’rowe told me recently: "It doesn’t matter what they say about you because the essence of life is the wisdom of women.

In addition to these words, I had a father who spent his life fighting for the rights of indigenous people, and who never discriminated between men and women. Mario Juruna was the first indigenous federal representative in Brazil. Before his death, he said to me: “I want you to be able to help your people one day."

Based on my participation in the Commission on the Status of Women (CSW58), I hope to broaden my vision with regard to the rights of indigenous people and the rights of women, as well as to know and be able to exchange experiences with other indigenous women who also seek better collective wellbeing. In learning to fight for our rights, we, as indigenous women in Brazil, must also have international reference points.

Tsitsina Xavante is attending CSW58 on an Yvonne Hebert scholarship. The views expressed by CSW participants in these blogs are their own and may not necessarily reflect those of UN Women.

Related News
03/03/2014
Mayan women build integrated pathway for violence survivors in Mexico
24/02/2015
UN Women Executive Director to co-host Beijing+20 “Women in Power and Decision-Making” high-level event in Chile
04/03/2014
How I firmly said NO to an early and forced marriage
27/02/2013
Aty Cuña: Indigenous women’s assemblies tackling cases of violence and rights violations
04/08/2017
From where I stand: “It is time that the world hears our voice”
END_OF_DOCUMENT_TOKEN_TO_BE_REPLACED