From where I stand: “It is time that the world hears our voice”

Rayanne Cristine Maximo Franca is an indigenous youth activist from Brazil. Since leaving her home at 17, she has embarked on a relentless pursuit of rights and recognition for young indigenous women. 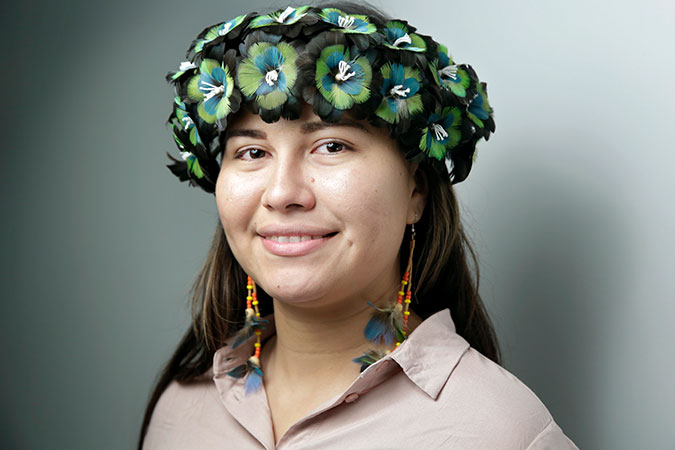 I left my home and community at 17. My family was receiving frequent death threats because my father had spoken out against corruption. When the opportunity to take the entrance examination for the university came, my family wanted me to go. For them, it was one less person in harm’s way. For me, it was a journey towards independence and empowerment.

I was among 35 indigenous students out of some 22,000 students in the University of Brasília. Even the teachers mocked us. One teacher said, why were we taking classes? We should walk naked and live in the forest.

I joined the Indigenous Youth Network in Brazil and started to organize indigenous youth to fight the discrimination that we faced every day. We formed the first organization of indigenous students at the University of Brasilia and negotiated specific policies for indigenous students.

About two years ago, I joined UN Women’s project, Voice of Indigenous Women. We talked to women from 105 indigenous communities and gathered their perspectives to be included in the national agenda. This is a new concept in Brazil—an agenda for indigenous women—and within that, giving a voice to young indigenous women is breaking new ground. I am a nursing student, and the first time I heard about women’s sexual and reproductive rights was in 2014, when I attended a regional meeting of indigenous women in Nicaragua.

For young indigenous women, access to information and participation in public policy remain a challenge. Take the case of participation—international organizations set up spaces and programmes for children, adolescents and adults. In an indigenous community, if you get your first period at 10, you would be considered a woman. You are “young” as long as your community considers you to be young. But that may not fit the definition of international organizations.

It is time that the world hears our voice and the country recognizes indigenous women as equal rights holders.”

Rayanne Cristine Maximo Franca, 25 years old, is part of the Indigenous Youth Network from Brazil. She recently participated, as part of Brazil’s official delegation, in the 61st session of the CSW that discussed “The empowerment of indigenous women” as an emerging issue. She also participated and the 16th session of the UN Permanent Forum on Indigenous Issues and talked to UN Women about the pressing issues that concern indigenous young women in Brazil. As part of a UN Women project, Voice of Indigenous women, generously funded by the Indigenous Peoples Programme of the Embassy of Norway, Ms. Franca has organized and gathered the perspectives of young indigenous women in Brazil to be included in the first national agenda for indigenous women. Her story is related to Sustainable Development Goal 5, that aims for the empowerment of all women and girls, their equal rights, leadership and participation; as well as SDG 3, which aims to ensure health and wellbeing, including universal access to sexual and reproductive health.

Related News
13/06/2016
From where I stand: Maria Judite da Silva Ballerio
06/04/2020
She persists: Sport is a tool for empowering girls in Brazil
08/10/2018
Sport paves the way for skills and jobs for young mothers in Brazil
09/11/2017
From where I stand: “It is important to show women athletes can be anywhere and can do anything”
23/08/2016
“People are beginning to see our potential…the potential of all the girls who play sport”
END_OF_DOCUMENT_TOKEN_TO_BE_REPLACED