Marcelly Vitória de Mendonça, participant of ‘One Win Leads to Another’ programme by UN Women and the International Olympic Committee, received the Olympic Cup on behalf of the people of Rio de Janeiro in the Closing Ceremony of the 2016 Olympic Games. 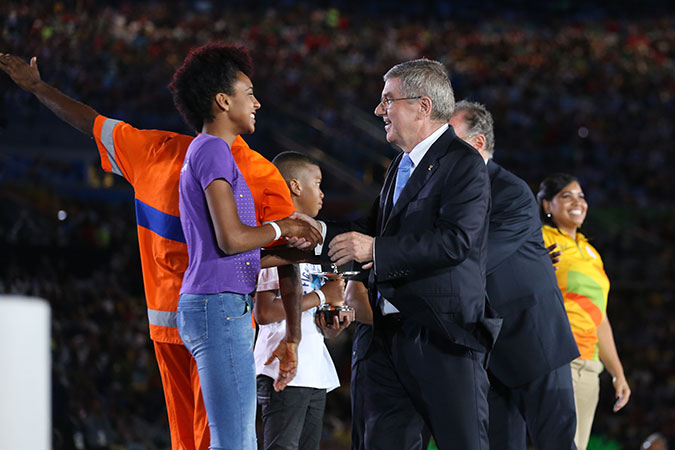 Fifteen-year-old Marcelly Vitória de Mendonça, a participant of “One Win Leads to Another”, joint programme by UN Women and the International Olympic Committee (IOC) in Rio de Janeiro, was selected to participate in the Closing Ceremony of the 2016 Rio Olympic Games on Sunday, 21 August.

Chosen for the positive impact the programme has had on her life, Marcelly was one of six young women and men to receive the Olympic Cup on behalf of the people of Rio de Janeiro from the International Olympic Committee on the main stage during the ceremony.

“People did not believe in me, no one gave me anything and no one expected all this from me. Now people are recognizing me, talking to me, congratulating me on the street,” Marcelly said. “People in my community used to see me going to my handball training in the morning and thought I was not doing anything important. Now they realize that what we do in sport is valuable and real. People are beginning to see our potential, mine, my team’s, the potential of all the girls who play sport. I’m truly happy and I'll give everything to seek more opportunities like this,” she added.

“I was so excited and happy to see my daughter on the stage of Maracanã,” said Daniele Cedri, mother of Marcelly. “I hope in the years to come she can accomplish her dream, which is to be a great champion. I am here to support her. And I thank the programme to make us smile in the midst of so many daily challenges in our lives.”.

Since participating in the programme, Marcelly and the handball team have matured and grown more committed to their sport, according to their coach, Felipe Veríssimo. “They have learned to listen to each other and to play as a real team. I was so proud to see Marcelly representing all of them. I know this is going to change her life for the better,” he said.

Friends cheering for Marcelly, who is representing girls from our programme at #Olympics #ClosingCeremony! #Rio2016 pic.twitter.com/mvgQA1ev38

Marcelly’s Facebook page has become a place for people to cheer her on. Many have referred in one sentence to her and Rafaela Silva, who won the first gold medal for Brazil at the Rio Games in judo, as reasons to be proud of Cidade de Deus, the favela they both come from. Marcelly was previously chosen by her peers to be the spokesperson at a joint event by UN Women, the IOC and Always LikeAGirl. She was also featured in a recent New York Times column.

Related News
06/04/2020
She persists: Sport is a tool for empowering girls in Brazil
08/10/2018
Sport paves the way for skills and jobs for young mothers in Brazil
06/08/2016
“We are carrying the torch for women and girls all over the world” – Executive Director
04/04/2019
Ask an athlete: How can we empower women and girls in sport?
09/11/2017
From where I stand: “It is important to show women athletes can be anywhere and can do anything”
END_OF_DOCUMENT_TOKEN_TO_BE_REPLACED