“We are strong women but many of us are afraid to stand up,” recounted Joycelyn Gill-Campbell, a former migrant domestic worker and the current outreach coordinator for Domestic Workers United, a New York-based organization for Caribbean, Latina and African nannies, housekeepers and elderly caregivers, which lobbied for the domestic workers’ bill of rights passed by the United States Congress in 2010. “The rights we’ve achieved cannot be obtained without organizing, mobilizing…”

Ms. Gill Campbell spoke as a panelist during the side event “Domestic Workers Count Too: Ensuring Protection, Upholding Rights” on 11 March at the 57th Commission on the Status of Women. It was co-sponsored by UN Women, the International Trade Union Confederation (ITUC) and the Government of the Philippines. 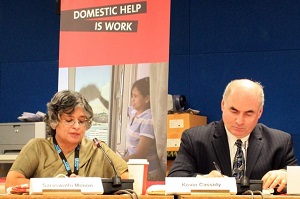 “Domestic workers contribute to social and economic development, sustain and revitalize employer households…” said Saraswathi Menon, Director of UN Women’s Policy Division. “They also allow Governments to benefit from hidden savings … and contribute by way of social and economic remittances to sites of origin, families and communities back home.”

She highlighted the need for more coherent, gender-sensitive and rights-based migration and labour policies, laws and services for domestic workers, as well as effective compliance and accountability mechanisms.

Citing estimates based on official national statistics, the ILO’s external relations officer, Kevin Cassidy, said domestic workers number somewhere between 52.6- and 100-million worldwide, and 83 per cent are women. During his presentation, he highlighted the key features and challenges of implementing ILO Convention 189, the first global standard for domestic workers, adopted in June 2011. He said it has since been ratified by eight countries and will come into force later this year.

Speaking on behalf of the second country to ratify the Convention in August 2012 (which allows it to come into force in August 2013) was Luzviminda Padilla, Labour Attache for the Government of the Philippines. Speaking about her nation’s experience, she said multi-sectoral engagement was successful in mobilizing public support for the Convention and has already resulted in the passing of a new national law to protect domestic workers. Hailing the law as “a breakthrough after decades of invisibility,” Ms. Padilla said the challenge will now be with its enforcement. 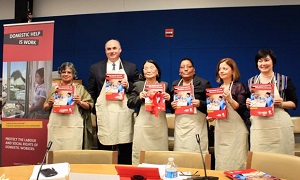 Supporting women workers towards a safer migration journey in Nepal

#AskUNWomen Twitter chat on the protection of domestic workers

Exploited domestic workers in Cameroon organize themselves to defend their rights