Hanoi — On 29 March, UN Women Executive Director Phumzile Mlambo-Ngcuka joined a large crowd of migrant workers at the Long Bien Night Market in Hanoi, the biggest in Viet Nam, for a lively conversation and informational roadshow on social protection and rights. 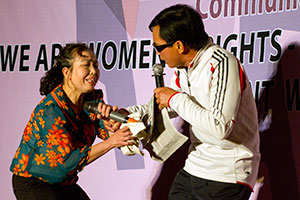 Against the backdrop of a Saturday night’s entertainment event to help migrants better understand their rights through games and role-play, Ms. Mlambo-Ngcuka threw away her prepared speech and invited children in the audience up on-stage to join her in song and dance.

The event was  one of a series of activities undertaken by “We are Women – A Rights-based Approach to Empowering Migrant Women in Viet Nam”, a three-year project that provides both male and female migrant workers access to essential social, legal protection and health services, and advice to maximize their livelihood opportunities. Implemented by the Institute of Community Health and Development (LIGHT) with support from UN Women’s Fund for Gender Equality, the project will directly benefit an estimated 1,140 women and 1,090 men in urban and rural areas. 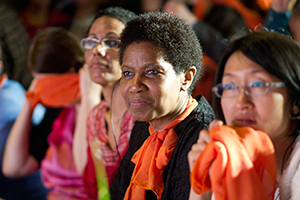 Earlier in the evening, Ms. Mlambo-Ngcuka met with a smaller group of 20 men and women to learn more about the daily challenges they face as migrant workers.

“If I didn’t find work here, we wouldn’t have enough money for school, food or electricity,” says Duyen, one of the 1,000 women who work at Hanoi’s largest wholesale market, which operates daily from 9 p.m. to 6 a.m. in the morning. She had little choice but to leave her husband and two children behind, a reality faced by many women migrant workers, and travel alone from Hai Duong province to find work in Hanoi.

“I work from 2 to 8 a.m. pulling a cart, carrying vegetables and loading them onto a truck. The bags are heavy, weighing around 70 kilos, sometimes as much as 100 kilos. There is little time for sleep,” said Duyen. “On a good day I earn around 200,000 VND (roughly USD10). However after food and lodging there is not much left over. I only have temporary residence so I don’t qualify for free medical check-ups. So healthcare for me is not affordable.

Women migrant workers like Duyen face many difficulties, from lack of access to basic social services and decent living conditions, to prejudice and discrimination and vulnerability to sexual harassment.

Evidence shows that the majority of Viet Nam’s migrants are young and increasingly female (increasing from 42 per cent in 1989 to nearly 55 per cent in 2010). Many work in the informal sector and are not covered by social protection.

During her three-day visit to Viet Nam, Ms. Mlambo-Ngcuka also visited a school and took part in a national policy dialogue on ‘Increasing Inclusion of Women and Girls in the Social Protection System: A Development Priority

In her keynote address at the dialogue, she said: “Effective social protection has the power to change the game, to build better, stronger and healthier nations not only for women and girls, but for all of us. 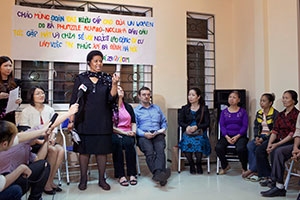 Jointly organized by the Government of Viet Nam and UN Women, the policy dialogue focused on increasing women’s minimum income and standard of living, social insurance, and access to services. The half-day meeting in Hanoi attracted more than 200 participants, including government ministries, representatives of international organizations and civil society, and gender experts.

In her opening remarks, Pham Thi Hai Chuyen, Minister of Labour, Invalids and Social Affairs emphasized the urgent need to promote gender equality and reiterated that improving the social protection system “is among the first priorities in the socio-economic development strategy of Viet Nam.

Ms. Mlambo-Ngcuka also shared highlights of the first-ever study in Viet Nam to examine the impact of existing social protection on women and girls, designed to identify gaps that must be addressed in strengthening the future provision of social security. With research conducted by Viet Nam’s Institute of Labour Science and Social Affairs (ILSSA) with technical and financial support from UN Women, the final version of the report will be published in mid-2014.