International Migrants Day is 18 December. We hear from Vietnamese women migrant workers as they discuss their challenges and efforts by a Fund for Gender Equality grantee to support them.

“I live with my children in a boathouse at the edge of the Red River. We hardly get permanent residence permits and have little access to basic services. My children do not have identification cards nor can they attend public schools,” said Linh, a woman migrant worker who recently took part in a public discussion held in Ha Noi in November with UN Women Asia-Pacific Regional Director Roberta Clarke. 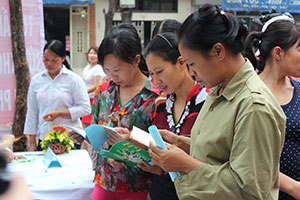 “In Viet Nam, women’s labour force participation is 72 per cent, which actually is quite high in the region. But most often they are in the informal economy where wages are lower than men, and legal and social protection are also not available,” said Clarke.

The event focused on the rights and social protection of rural women migrant workers, showcasing the initial results of the project “We are Women – A Rights-based Approach to Empowering Migrant Women in Viet Nam”, which began in April 2013 and is implemented by the Institute of Community Health and Development (LIGHT) in Ha Noi with support from UN Women’s Fund for Gender Equality.

Linh is one of the 1,000 women who work at the Long Bien market, the biggest wholesale night market in Ha Noi. The commercial transactions at the market run from 9 p.m. to 6 a.m. in the morning.

“Each night, I can earn nearly seven US dollars by transporting about one tonne of goods,” said Huong, another woman migrant worker at the  meeting. “Like most migrant workers, I do not have a written contract with any employer.” 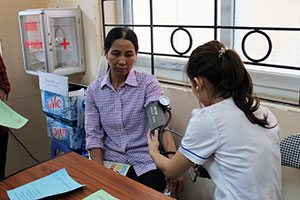 Rapid industrialization and urbanization in Viet Nam over the past two decades have resulted in increasing flows of migrants from rural to urban areas for work purposes. In the past, labour migration from Viet Nam was dominated by men. However, the number of migrant women has increased steadily over the last decade. According to a 2010 population study by the General Statistics Office of Viet Nam, the percentage of migrant women increased from 42 per cent in 1989 to 50 per cent in 1999, and reached nearly 55 per cent in 2010.

The same study, which analysed documented migration, showed that 40 to 50 per cent of migrants in Ha Noi and Ho Chi Minh City are women. Fifty eight per cent of them work in the formal sector, in places such as garment and textile factories, and 42 per cent of them are informal workers such as domestic workers and street vendors.

Migrant workers also face discrimination in the labour market and suffer from social stigma. Evidence suggests that some migrant women in Viet Nam are particularly vulnerable to gender-based violence as they are engaged in domestic work which is hidden and difficult to regulate. As a result, they are often excluded from basic social protection, have low and unstable income and no access to unions which can help protect their rights.

Supported by UN Women’s Fund for Gender Equality – a global fund exclusively dedicated to gender equality and women’s economic and political empowerment – and led by  LIGHT, the project aims to strengthen access to socioeconomic rights for rural migrant women workers in Viet Nam.

An estimated 1,140 women and 1,090 men from five neighbourhoods in Ha Noi and six rural communes will directly benefit from interventions during the project’s three years of implementation (2013-2015), through activities such as employment training, advocacy, awareness-raising and access to healthcare.

Rural Women in Viet Nam Train for a Rainy Day