Rural Women in Viet Nam Train for a Rainy Day

The Women's Union building in Viet Nam's Binh Dinh Province is afloat with music, as traditional songs about the province, the seasons, fishing and farming drift through its rooms. Yet those singing know that the life they celebrate is under threat. Each has gathered here to discuss plans and actions for tackling natural disasters.

Viet Nam has been badly affected by climate change, with floods and other natural disasters becoming more common each year. They prove particularly devastating in rural parts of its central-south provinces, such as Binh Dinh and Phu Yen; and since these are also among the poorest provinces, villagers here are particularly vulnerable. 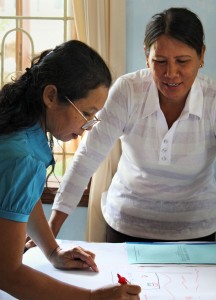 The training projects in Binh Dinh have been operated by the Viet Nam Women's Union since 2010 with the support of UN Women, and today, fifty participants — female and male — are planning how best to prepare their villages and hamlets for floods. As they break into teams for discussion, the trainer asks each to consider how groups may be differently affected, such as men and women; the young and the elderly; or those who are less mobile because they are ill, or heavily pregnant.

This is the country's first programme to address and encourage female participation in disaster risk reduction. As the participants acknowledge, women have long been excluded from decision-making in this area of community life, even though they may be worse affected by extreme environmental conditions, compared to men. For example, although women usually manage the small plots of agricultural land in each family for income or sustenance, land titles are usually given to the men. This means that following a disaster, many women cannot independently claim state-offered reconstruction funds. They are also more at risk of harm during flooding because, while boys are taught to swim at an early age, girls rarely are.

Tanh, 48, is the head of the Women's Union group in her village and a farmer; she is a mother of four, and weaves for additional income. Coming from a village with a population of 2,000, she says that natural disasters kill between one and three people there each year. “The training is very useful for me, she says. “I have some knowledge of disaster preparedness, but it is not systematic.

This training has largely taken place through day-long community-level workshops — 40 of which took place last year — with a focus on flood and typhoon preparation. Some longer sessions have also been held at district and provincial levels. The project also introduced disaster management themes before the workshops began, using other creative outreach techniques. By adapting a successful model in Latin America, developed by the International Strategy for Disaster Reduction, the project introduced many of the villagers to disaster reduction issues in specially commissioned radio soap stories. Approximately 80 percent of households own radios in Viet Nam, and they are popular with women listeners.

Tanh says that by amplifying the voices of local women, the training has already changed her community for the better. Because of this project, for example, the People's Committee of Tuy Hoa City in Phu Yen has appointed the Women's Union as a regular member of the Central Committee for Flood and Storm Control, which is the main body for decision-making about natural disasters. The pilot project will be scaled up over the next four years, in Binh Dinh, Quang Binh, and Quang Tri, and other parts of the central-south region.

With time and training, women like Tanh are becoming more confident about the knowledge and the insight that they can bring, at local and policy levels. And this can only work to keep their communities safer when the rainy season arrives.

Related News
11/05/2017
In Viet Nam, women are leading disaster prevention and response
08/04/2022
Women spearhead climate change response in the South Pacific
14/08/2019
Take five: “Addressing gender and protection issues in humanitarian action is lifesaving and planning and budgeting needs to reflect that”
23/08/2018
Women at the helm of cyclone recovery efforts in Tonga
13/03/2018
After the landslides
END_OF_DOCUMENT_TOKEN_TO_BE_REPLACED