Photo essay: A house of art and memories seeks to bring closure in Guatemala 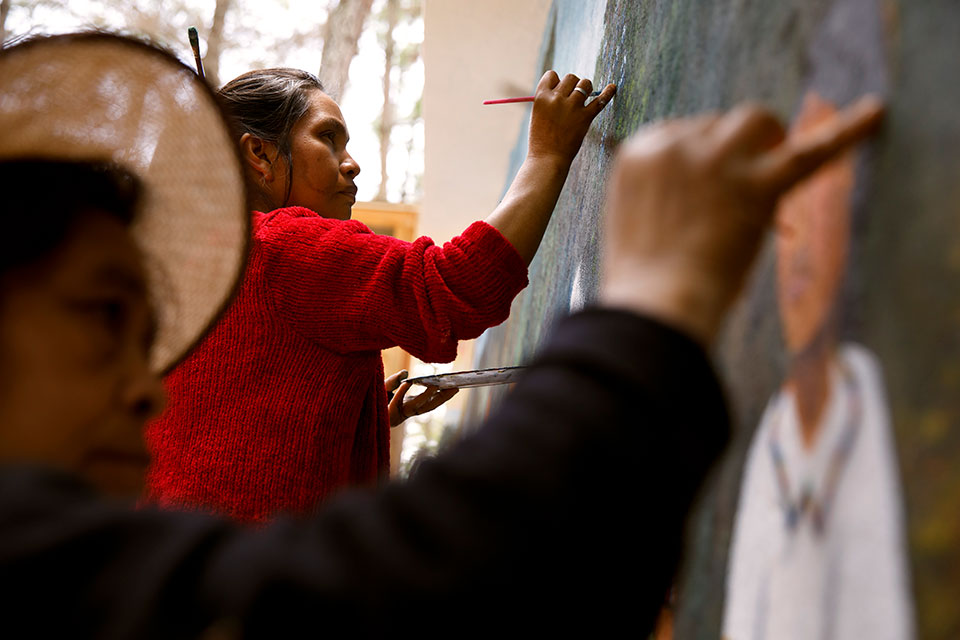 Artists María Nicolasa Chex and Paula Nicho Cumez paint scenes of indigenous cultural life on one of the murals adorning the “Center for the Historical Memory of Women” outside of Comapala. Photo: UN Women/Ryan Brown

San Juan Comalapa, a municipality located some 80 Kilometers away from the capital, Guatemala City, has been called the “Florence of America” because of its rich history of art, dating back to the 1930s. Home to Kaqchikel painters, including world-renowned artist Andrés Curruchich, the streets of Comalapa are flanked by colourful murals even today. However, this beautiful haven for art didn’t escape the horrors of the Guatemalan civil war. The 36-year-long armed conflict between the military and guerilla groups killed at least 200,000 people, mostly indigenous. Many of the dead have not been identified yet, and the majority of the disappeared have not been found. Thousands of families in Guatemala have not found closure. 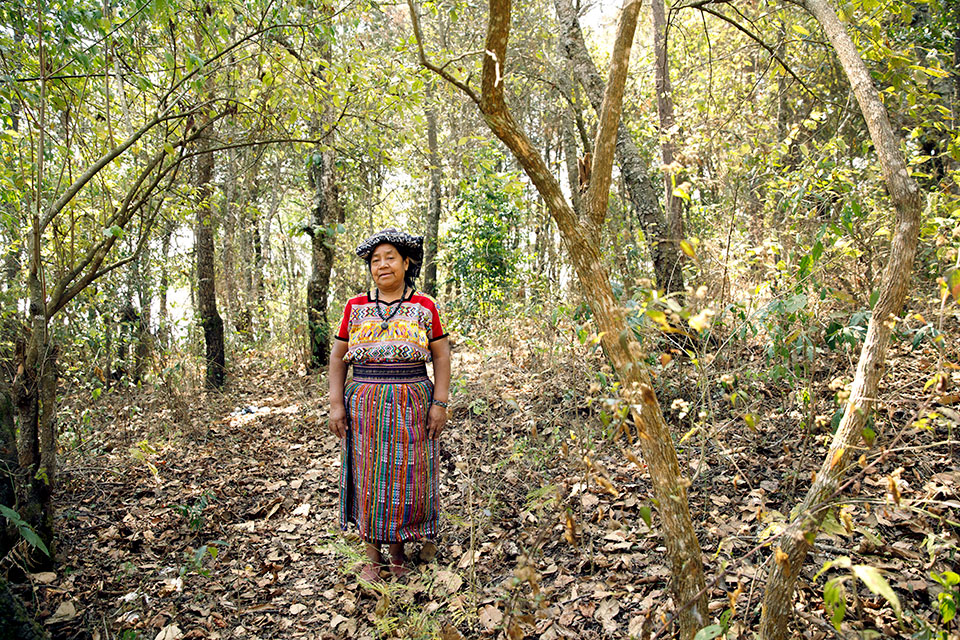 Rosalina Tuyuc Velásquez, now 63, is one of those families. She is also a human rights activist, has served as an elected Congressional deputy, and co-founded CONAVIGUA—a widow’s association composed of women whose husbands, sons and daughters had been either killed or disappeared during the conflict. The organization also supports women survivors of conflict-related sexual violence and facilitated testimonies from women in support of the national reparation programme that was adopted in 2003. UN Women, along with local and international partners and with funding from the UN Peace Building Fund, supports CONAVIGUA (National Widows Coordinator of Guatemala) to advance women’s, and indigenous women’s rights to truth, justice, and reparation to break the cycle of violence against women.

This is the story of Rosalina Tuyuc Velásquez, in her own words, and thousands of women like her, who are still looking for their loved ones and fighting for justice.

“Comalapa was one of the municipalities affected by the conflict. An estimated 4,000 – 5,000 people [from this area] were forcibly disappeared—that included men, women and children. The villagers knew that the military kidnapped [indigenous] people and brought them here and tortured them. While alive, they were forced to dig their own graves. Some would be buried in the ground, here, still half alive,” narrates Rosalina Tuyuc Velásquez, who was instrumental behind setting up a memorial for victims of the conflict in Comalapa. It’s called the “Center for the Historical Memory of Women”. 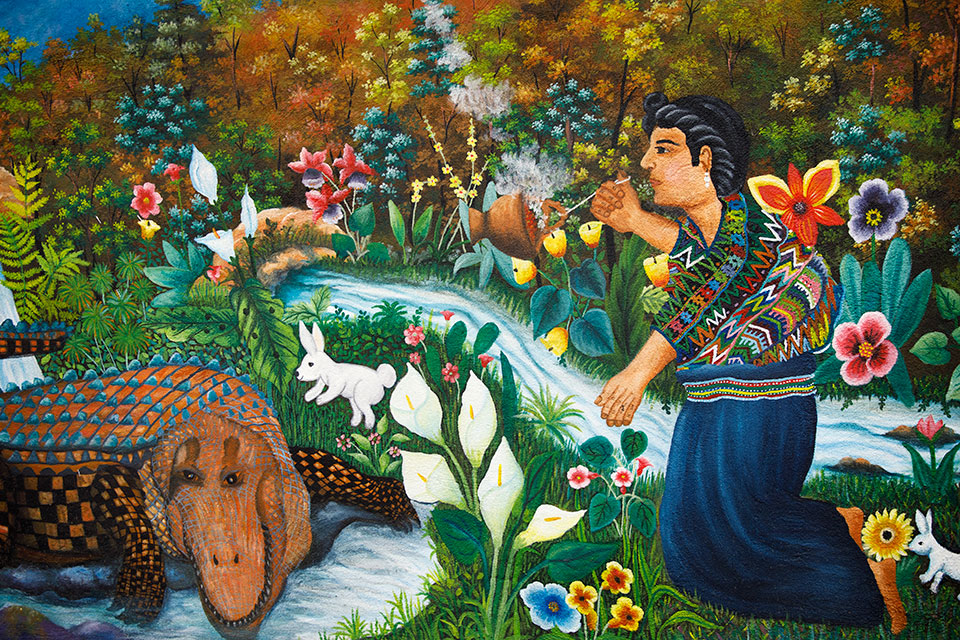 A scene from the mural on the memorial. “Sometimes, women dream of these creatures and they come and paint them. In their dreams, they heard the [spirits] say that they were guarding this place and we should not be afraid,” says María Elena Curruchiche. Photo: UN Women/Ryan Brown

The memorial, first of its kind in the country, sits on a 80-square-vara [roughly 56 square metres] land surrounded by woods. In the middle of the clearing stands a one-room house. Its external walls are being painted in traditional murals by women painters from the region. 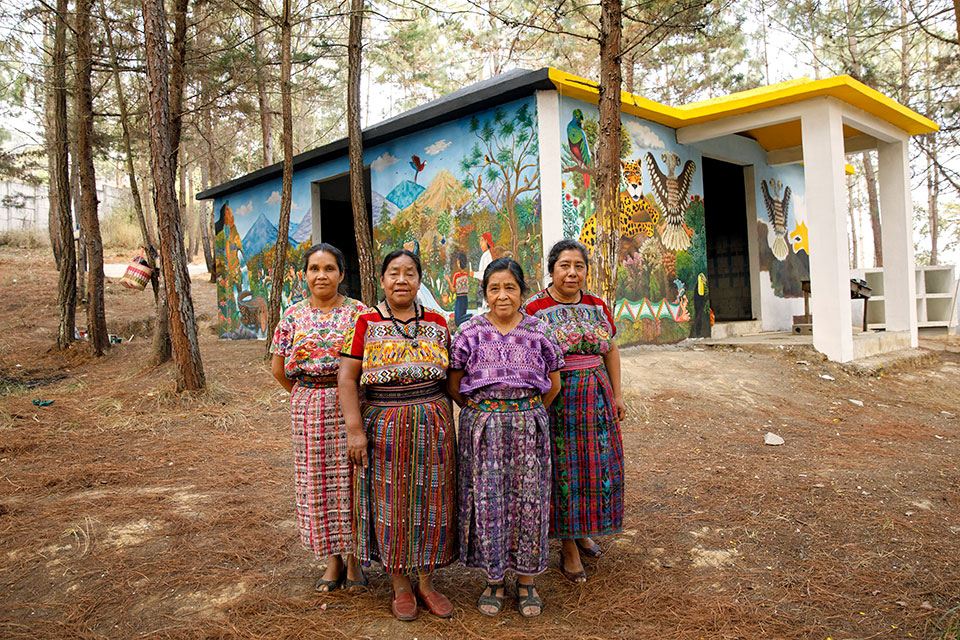 The walls inside the house of memories are adorned by crosses bearing the names of victims who had been killed or disappeared during the conflict. 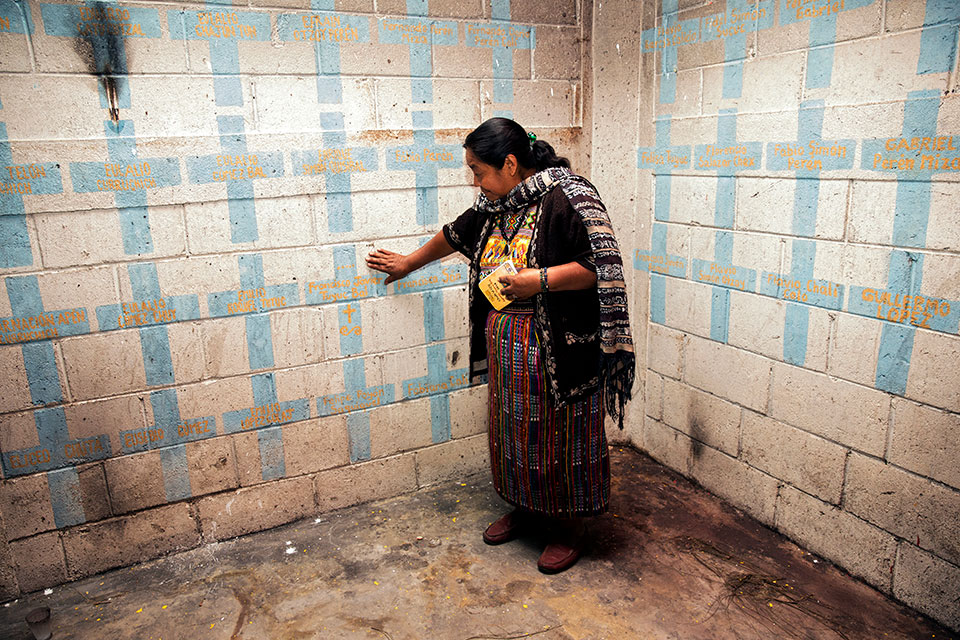 “When there was no more room to bury the bodies, the military started digging mass graves. They threw people in these graves, threw gasoline over them and burnt the bodies. People in the area said they could hear the screams from far away; they could smell people burning.”

For a long time, the Guatemalan military claimed that only guerrilla fighters were killed in this area, but the mass graves also contained the bodies of decapitated and mutilated women and children.

Tuyuc points to a deep hole in the ground—one of the three mass graves that have been left uncovered—"In this site, we found many graves, we left three of the mass graves open. When we exhumed this grave, we found 14 bodies in it, 13 were men, stacked on top of a woman. In another grave, we found a family buried together—the mother, father and three daughters. One of the girls was missing a foot.” 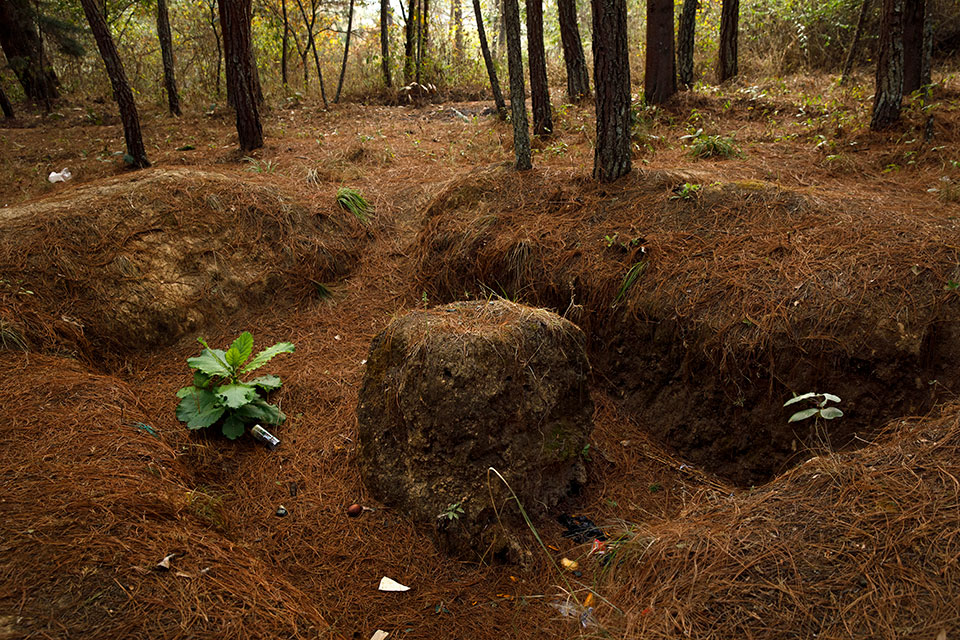 “We exhumed 226 bodies from this site. 173 have not been identified,” says Rosalina. Above: an uncovered exhumation site next to the memorial building, near the murals. Photo: UN Women/Ryan Brown

Since 2003, CONAVIGUA has tried to locate the families of the dead, using DNA evidence, working with the Guatemalan Forensic Anthropology Foundation (Fundación de Antropología Forense de Guatemala, FAFG). But many of the bodies exhumed from the site in Comalapa are yet to be positively identified.

“We exhumed 226 bodies from this site…173 have not been identified,” says Tuyuc.

“We feel the need to give them a proper burial that they deserve. Those who have not found their families can now come here and honour their families’ memories here. We should promote this kind of initiative throughout the country,” she adds. 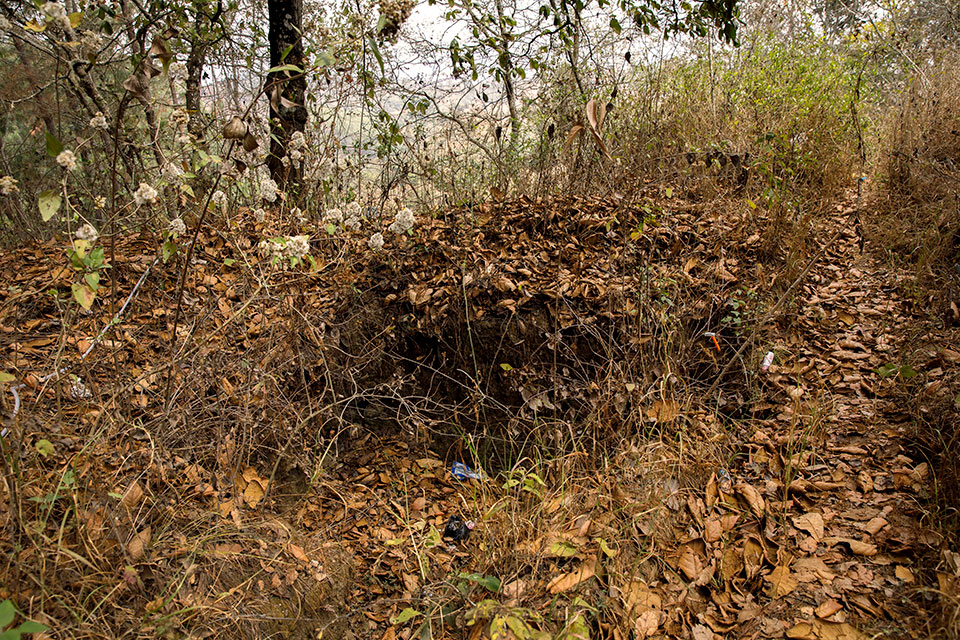 Leaves and debris surround one of the three open pits on the memorial grounds. Three sites were left uncovered after exhumations took place and are intended to grow over naturally in order to be seen and remembered. Photo: UN Women/Ryan Brown

“Last time I saw my husband was 23 May 1984,” remembers Tyuc. Just two years before that, her father had also disappeared.

Tuyuc’s husband was a farmer and an indigenous leader who advocated for land rights and promoted farmers’ cooperatives, which made him a target of persecution by the military. At the heart of Guatemala’s bloody conflict were struggle for land and racism against indigenous populations.

“He was captured by the army and never came back. I looked for him in hospitals, on the streets and in prisons. I never found him.”

Tuyuc was 28 years old at the time. At 63, she is still looking for the remains of her father and her husband.

“I still keep hoping to find their bodies. Every time we have a new exhumation, the hope rises. When the exhumation finishes, the hope falls.” 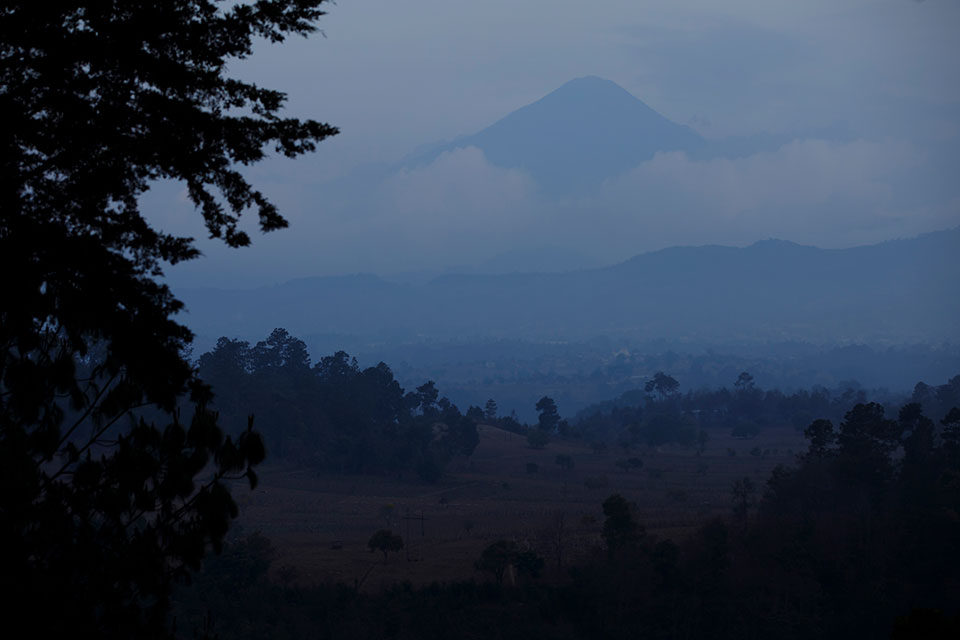 A view of the mountains from nearby the memorial site. Photo: UN Women/Ryan Brown

But her search is not only for her family, she says. It’s also a search for peace and dignity for thousands of indigenous women who were raped, and who lost their fathers, husbands, sons and brothers: “Perhaps we didn’t know what human rights were, but we knew what it meant to live free. When the conflict came, all that freedom, peace, security went away. Not only for my family, but thousands of families.” 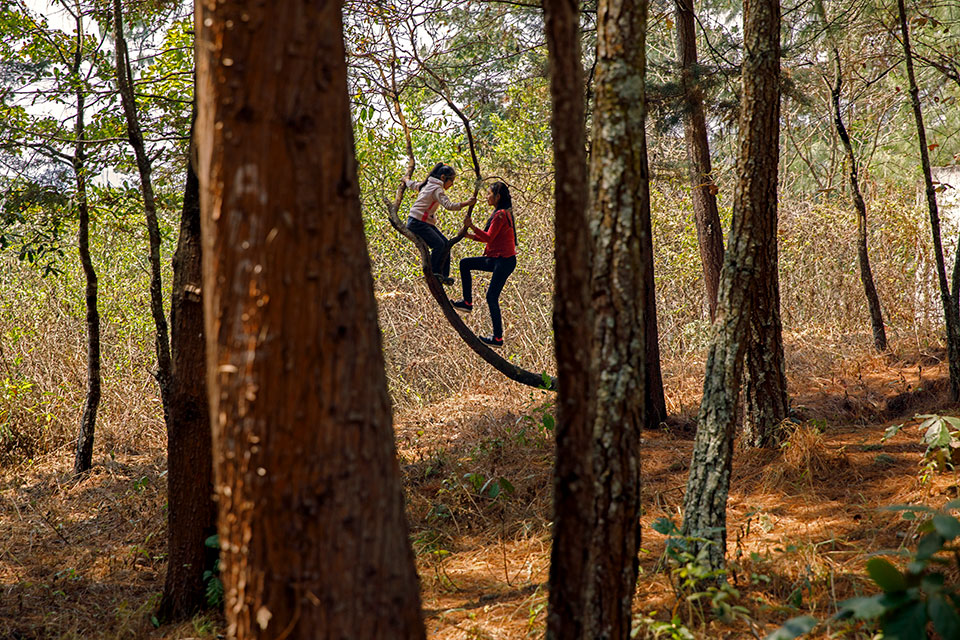 “Thousands of women are psychologically impacted, because they feel that they are to blame, they feel dirty [because of the sexual violence they suffered]. When they realize that the guilt shouldn’t be theirs, it’s the perpetrators that are to blame… they recover their dignity, they feel liberated. But this is not an easy process.”

As violence against women, a legacy of the conflict, continues to rise in Guatemala, UN Women is empowering indigenous women, including the widows and survivors of the conflict, who are among the most affected and marginalized. 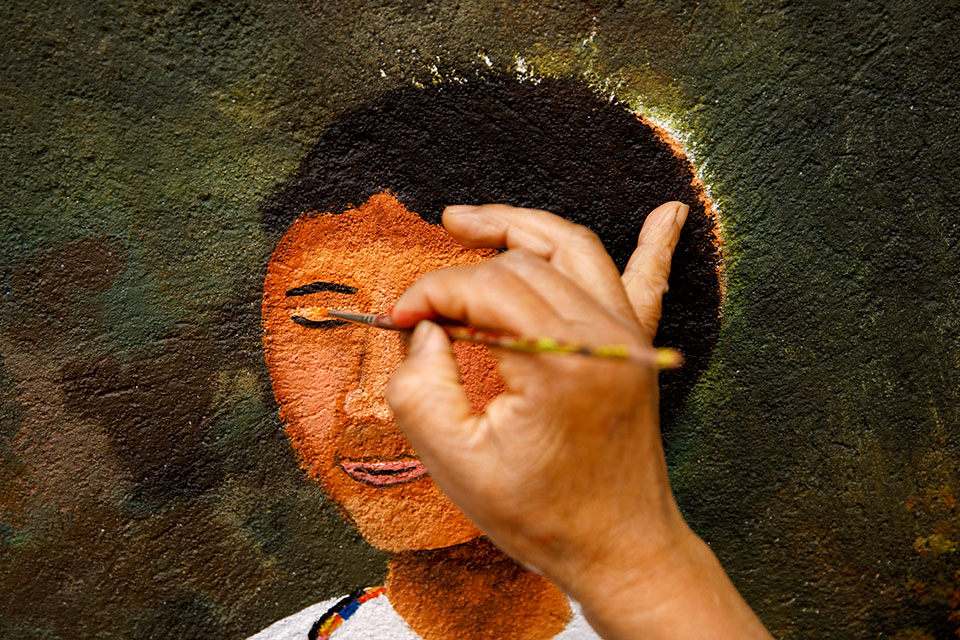 “These murals represent and record the art made by indigenous women. The paintings show the natural lives of indigenous peoples in connection with nature,” says Rosalina. “They are also there to give our dead some happiness. All of the designs and the construction of this site has inputs and knowledge of women". Photo: UN Women/Ryan Brown

When asked what her greatest wish is, Rosalina Tuyuc Velásquez doesn’t hesitate: “To know where my husband and my father are buried, and to say to my children that I have accomplished my mission.”

She doesn’t know if that will happen in her lifetime, but every day, Tuyuc and other women leaders of Guatemala wake up and get to work, to find the truth, to demand justice, and to uplift other women.