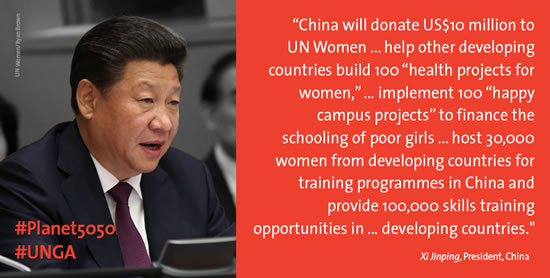 Every Chinese woman has the opportunities to excel in life and make her dream come true. Through their own development, Chinese women will also play a greater part in the global women’s movement and make a greater contribution to gender equality in the world.

To support women’s development worldwide and the work of UN Women, China will donate USD 10 million to UN Women for the implementation of the Beijing Declaration and Platform for Action and the realization of the related goals in the 2030 Agenda for Sustainable Development.

Speaking at the Global Leaders' Meeting on 27 September 2015, President Xi Jinping said: “China will do more to enhance gender equality as its basic State policy, give play to women's important role as ‘half of the sky’ and support them in realizing their own dreams and aspirations in both career and life.” [ Speech ]

Following President Xi Jinping’s commitments to advance gender equality in China and worldwide, at the Global Leaders’ Meeting last year, China is implementing its commitments on foreign aid, including carrying out the 100 “Health Projects for Women and Children” and the 100 “Happy Campus Projects”, hosting 30,000 women from developing countries for training programmes in China and providing 100,000 skills training opportunities in local communities in developing countries.

Legislation on women’s rights continues to be improved. The Anti-Domestic Violence Law of the People's Republic of China took effect on 1 March 2016. Review mechanisms on gender equality in regulations and policies have been established in 24 provinces, regions and municipalities.

The Women Entrepreneurship and Innovation Action has been launched to help women start businesses in development of the digital economy. For example, as of June 2016, a total of 279.453 billion Chinese yuan (USD 41.87 billion) has been dedicated to provide small-sum loans to women.

A conference to commemorate the 20th anniversary of the Fourth World Conference on Women and to accelerate the implementation of China’s basic State policy on equality between women and men was co-organized by the National Working Committee on Children and Women under the State Council (NWCCW) and the All-China Women’s Federation (ACWF) in Beijing on 13 October 2015.