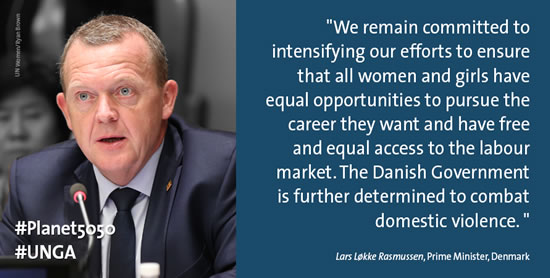 The 2030 Agenda for Sustainable Development sets out new and ambitious goals that Denmark welcomes. It will continue its long-standing acts of support for gender equality. It remains committed to intensifying efforts to ensure that all women and girls have equal opportunities to pursue the education and career they want, and have free and equal access to the labour market. Further, it is determined to combat domestic violence and proud to organize the next Women Deliver conference in 2016 in Copenhagen.

Speaking at the Global Leaders' Meeting on 27 September 2015, Prime Minister Lars Løkke Rasmussen said: “We remain committed to intensifying our efforts to ensure that all women and girls have equal opportunities to pursue the education and career they want and have free and equal access to the labour market.”

One year following Denmark’s commitments at the Global Leaders’ Meeting on education, work and combatting domestic violence, the country is reporting considerable progress: women in Denmark have one of the world’s highest participation rates in the labour market. Strong antidiscrimination laws that prohibit differential treatment on the basis of gender, and the provision of child-care for children from the age of 6 months by all municipalities, have contributed to this positive result.

In 2016 several initiatives against stalking were launched, and efforts to combat rape were strengthened, including through tougher prison sentences for perpetrators and better support and protection for victims. Furthermore, a course of coping strategies for girl- and boy-victims of dating violence was established. New methods to combat everyday sexism have been developed. A nationwide campaign aimed at raising awareness and breaking the still-existing taboo of partner violence will be launched early 2017.

To address remaining challenges in education, the Minister of Children, Education and Gender Equality has formed a committee tasked to propose how to ensure that both girls and boys are able to develop their abilities on equal terms and participate in Danish society. The committee is expected to deliver its report in November 2016.

In May 2016, Denmark successfully hosted the fourth international Women Deliver Conference to discuss how to implement the SDGs in a way that they matter most for girls and women. [ Full update ]