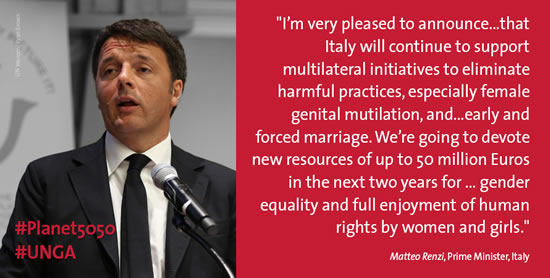 Italy considers the Beijing Platform for Action the blueprint for advancing women’s rights and a more sustainable future for everyone, and remains fully committed to the Platform’s implementation. It will continue to back multilateral initiatives to eliminate harmful practices, especially female genital mutilation, and child, early and forced marriage.

New resources of up to 50 million Euros in the next two years will be dedicated to advancing gender equality, and ensuring the full enjoyment of human rights by women and girls. Italy commits to continued strong support to UN Women and the UN Population Fund by maintaining high levels of national contributions to resources and programmes.

Speaking at the Global Leaders’ Meeting on 27 September 2015, Prime Minister Matteo Renzi: “When we adopt the 2030 Agenda for Sustainable Development, we pledge to leave no one behind. Despite progress, much remains to be done.” [ Speech ]

The Government of Italy has adopted a number of measures toward fulfilling the commitments announced at the Global Leaders’ Meeting in September 2015. A strong emphasis has been put on sustaining efforts to eradicate traditional harmful practices, such as female genital mutilation and child, early and forced marriages, both at the national and international levels.

Financial resources allocated to Italian development cooperation initiatives for gender equality and women’s empowerment amounted to 22.88 million Euros, representing 45.76 per cent of the total amount of funds over a two-year period pledged at the Global Leader’s Meeting.

The country has allocated funds and taken steps towards the implementation of the Extraordinary Action Plan against Sexual and Gender-Based Violence adopted in July 2015. A 12-million-Euro public Call for Proposals was launched in March 2016 to finance projects to improve shelter and assistance services to women survivors of violence and their children, as well as to enhance the local service network. A special paid leave has been introduced for working women survivors of violence who attend certified protection programmes. The first National Action Plan against the trafficking and exploitation of human beings was finalized in December 2015 and adopted in February 2016.

The Italian Parliament adopted further legislation on gender quotas within state-owned companies and on compulsory paternity leave. A new bill on flexible working arrangements for public and private sector employees has been tabled in Parliament. Additional financial resources to facilitate access of women-owned businesses to the banking system have been earmarked and will be rolled out in the coming months. [ Full update ]