Sweden vows that all national policies, budgets and international aid will contribute to gender equality (updated) 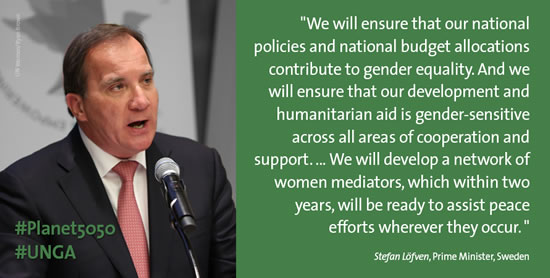 Sweden pledges to ensure that national policies and budget allocations contribute to gender equality, and that development and humanitarian aid are gender-sensitive across all areas. A proclaimed feminist Government, Sweden has set a gender equality policy goal and committed to implement gender mainstreaming and gender-responsive budgeting. Equal employment and pay, representation and health will be three specific focus areas for the Government.

With the Beijing Platform for Action and the new 2030 Agenda for Sustainable Development providing powerful action plans for equality, development and peace, Sweden will take action to strengthen women’s contributions to peace and security. It intends to develop a network of women mediators that within two years will be ready to assist peace efforts wherever they occur. The aim of this initiative is not only to develop Sweden’s own capabilities, but more importantly, to cooperate with female mediation networks from the global South. With women’s participation at all levels vital to the success and sustainability of peace and peacebuilding efforts, proactive leadership is needed to promote and include women.

Speaking at the Global Leaders' Meeting on 27 September 2015, Prime Minister Stefan Löfven said: “Gender equality is a fundamental matter of human rights—but it is also smart economics. By offering one half of our populations the same opportunities as the other half, we can double the talent pool and unlock enormous potential for prosperity.” [ Commitment | Speech ]

The Swedish government has stepped up its efforts to mainstream gender into the Budget Bill for 2017. All policy proposals and reforms in next year’s Budget Bill would be based on a gender equality impact analysis and incorporate a gender-sensitive approach. The Government has also expanded a programme to strengthen gender mainstreaming in government agencies involving sixty public sector agencies.

As a means to advance and implement the Women, Peace and Security agenda, Sweden has adopted its third National Action Plan for the implementation of the UN Security Council resolutions on women, peace and security. The action plan identifies 12 priority countries for the implementation, enabling context-specific activities and strong partnerships. The Swedish network of women mediators has been established and is currently active in a number of peace-building processes. [ Full update ]