69th session of the General Assembly

As global leaders convene for the sixty-ninth session of the UN General Assembly in New York, UN Women will ensure that gender perspectives are reflected and that gender equality issues receive strong visibility and commitment to implementation.

This 69th  session represents a unique opportunity to  position gender equality and women’s empowerment at the heart of the global agenda at the juncture of several historic processes: the deliberations on the post-2015 development framework and Sustainable Development Goals—which will follow-up on the Millennium Development Goals—the 20-year review and appraisal of the Beijing Declaration and Platform for Action, the 29th special session on the follow-up to the Programme of Action of the International Conference on Population and Development and the high-profile World Conference on Indigenous Peoples.

The week-long General Debate (24 September-1 October) will focus on the theme of “Delivering on and implementing a transformative post-2015 development agenda”. Against this background, through a series of high-profile events at the 69th session of the UN General Assembly, UN Women will bring the diverse voices and concerns of women into the debate.

During the high-level General Assembly week, the UN Secretary-General will also convene a Climate Summit, on 23 September 2014, to engage world leaders and advance climate action and ambition. The Summit will serve as a public platform for leaders at the highest level – all UN Member States, as well as finance, business, civil society and local leaders from public and private sectors – to mobilize political will for a universal climate agreement in Paris in 2015.

See a list of our events and related coverage.

See our infographic for an analysis of the increasing integration of a gender perspective in the work of previous sessions of the General Assembly. 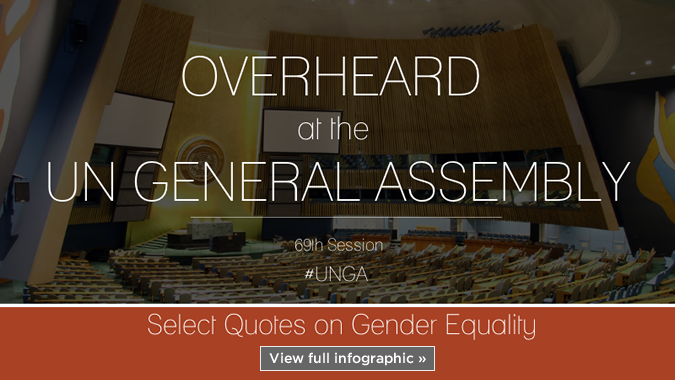